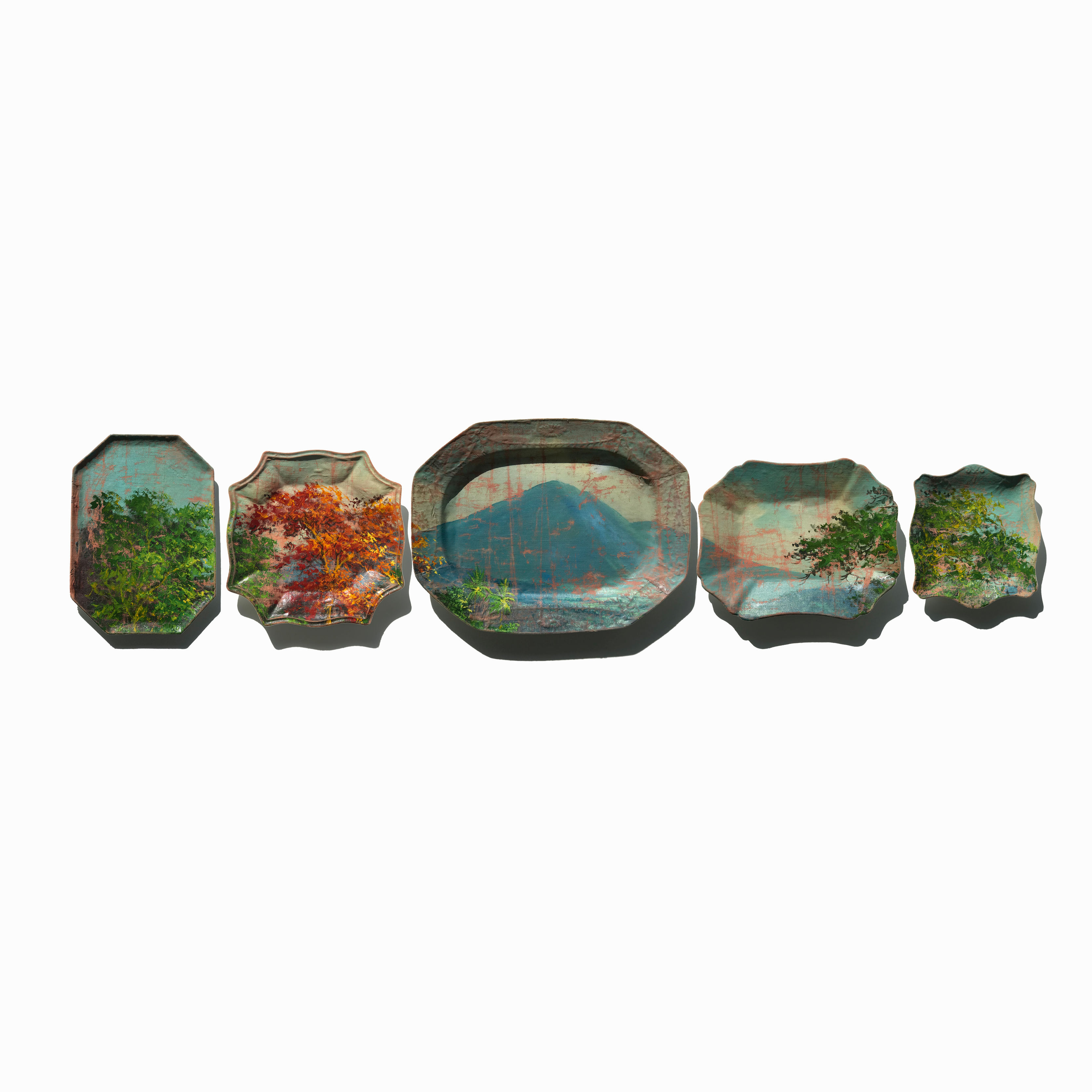 We are Marcello De Simone and Bruce Wayland, an Italian and American design duo living and working in Amsterdam.

Under the name Studio DeSimoneWayland we create unique works that are instilled with history, and historical references yet utterly contemporary. Our combined backgrounds in studio art and art history informs our creations.

One of the medium we explore in our artworks is that of plates in the Western and Eastern tradition.
Our attraction to plates – and by extension to ceramics in general – came by way of their surface decoration as well as their shapes.
The concept of combining the subject matter of the plates with another image came about in 2010 with our "Altered Perspectives".
As the name implies the ‘perspective’ of the painting is ‘altered’ through its unique dialogue with the subject of the decoration of the plates, the sum of the whole being more interesting than the individual parts.
Each "Altered Perspectives" composition is the result of finding the perfect selection of plates (based on their subject) and have them dialogue with a painting. We create the layout that can at best highlight the details in the painting and reference the decoration on each plate.
Only once we are satisfied with the composition we start the process of creating the artwork.
As we explored the idea of these combinations, the shapes of the various plates also became an important element of the overall composition.

Ovals mixed with circles, and in more recent works with more unusual shapes such as scalloped shell shapes or 18th C. inspired Delfts Blue plaques.
Since their inception, the Altered Perspectives have been commissioned by Anthropologie and Terrain (2010-13), MaxMara (2014-15), Achmea (2016), The Walt Disney Company (2017), and have been published in several international interior-design magazines.

FROM ALTERED PERSPECTIVES TO ALTERED HISTORIES
Wanting to create an entire work was the natural progression of our work, and so in 2014 we created a new series where we designed every aspect of the ceramics.
We created the plates and designed our own digital transfers. In effect we were setting out to create the idea of the ‘Altered Perspectives’ entirely in ceramics.
This process proved lengthy and labor intensive: the ceramics required three firings; the plaster moulds -which we also created- incorporated texture to mimic the textile of the painted canvas.

FROM A DIFFERENT CLOTH
In the process of creating our own plaster moulds we discovered quite by chance the beauty of the textiles combined with the ceramics. It was this ‘surprise’ discovery that lead us to push the whole idea of what we were making in an entirely new direction.
Our journey started by wanting to create ceramics with texture, but leave them unglazed, and yet have colour.
This problem was resolved by adding pigments to the stoneware or porcelain, thus allowing us to focus on the surface texture. Adding pigments to the clay opened up the world of colour, and allowed to create our own custom colour combinations, so that the end result is just as much about the colour as it is the texture and form.
The entire process from surface decoration to shape to texture and colour has been a very organic one, and like anything in a natural process our story within ceramics continues to evolve.

Studio DeSimoneWayland In The Studio

We are obsessed by ceramics in all its aspects, and we keep evolving our work in the medium, experimenting with colour, patterns and lately metallic and crystal glazes.  We are researching the iconography of scholar rocks, brush pots and mountains in Asia for a new project, and this has taken our practice along new, unexpected and exciting paths.

All our work starts with a thorough visual research which in turns inspires new ideas, compositions and colours.

Our eye and imagination

Learn to say no!

15 Artists Share About How They Got Started in Art

New In: Artworks from Promising Artists