The theme of the show is inspired by philosopher Henri Lefebvre’s ‘Rhythmanalysis: Space, Time and Everyday Life’, the fourth volume in his series, The Critique of Everyday Life.  Rhythms (which are any actions that occur at the intersection of time, space, and energy) of urban spaces are analyzed.  The state of polyrhythmia is characterized by two or more different rhythms constantly interacting with one another.  The most significant condition in defining a rhythm is repetition, without which it cannot exist.  In the context of metropolitan spaces and life, rhythm entails the continuance of waking up, going to work on a daily basis, in order to reach the same end goal.  The action starts with one person in one city, and multiplies as populations increase, and we witness the recurrence of urban development globally.  Each artist has utilized this notion of repetition in a distinct manner to convey their own critique on modernity.

Hong Kong artists Kwan Shueng Chi and Ko Sin Tung, both use film as a medium in which physical gestural repetition is depicted to reflect the effects of urbanity.   In Kwan’s video, One in a Million, notes in different currencies (only Hong Kong dollars are pictured below) being counted up to one million, are shown on loop.  In a literal sense, the act of counting money is repetitive.  On a broader level, money is sought after universally, particularly in larger cities like Hong Kong where financial institutions are driving forces.  In the never ending quest to accumulate wealth, we fall into a cyclical pattern, highlighting matters of capitalism, power, and greed.  Additionally, transactions involving money link various people, places, and businesses to one another, focalizing the polyrhythms of globalization. 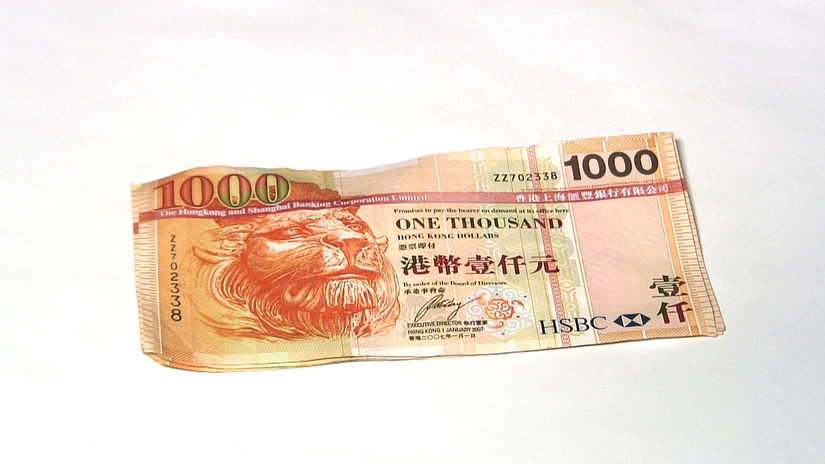 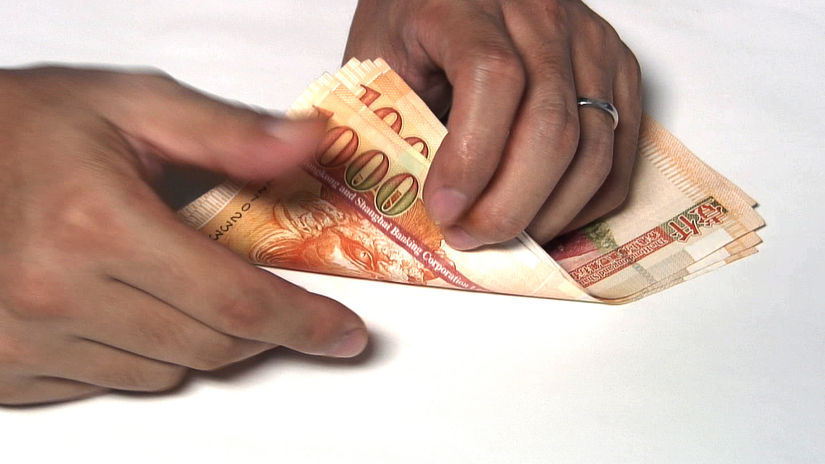 Ko’s film 24 Tubes, takes a less economic approach, and portrays two hands holding a fluorescent beam, then releasing it.  We only see it fall, not where it ends up.  The finality of the movement is left uncaptured, leaving the motion inconclusive. In both videos, viewing the act in itself can be a slightly dulling and hypnotic experience.  The viewer, in watching the video, is repeating the action of engaging in the same movement over and over again, creating a polyrhythm that encapsulates the interaction between the viewer and artwork. 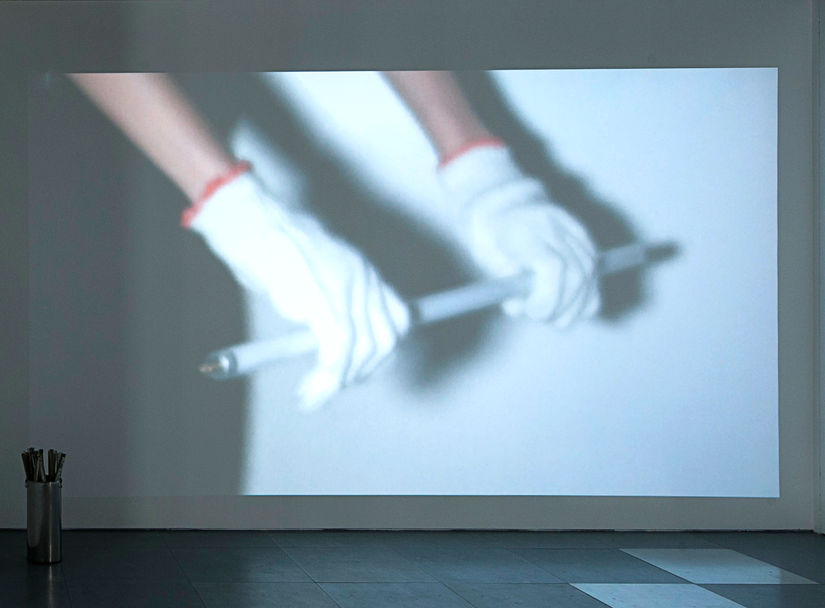 João Vasco Paiva, who is based between Lisbon and Hong Kong, demonstrates repetition visually, through subtle aesthetics in Kulturbüro.  Paiva creates a grid of color test print outs that were collected from offices in Zurich, which publish materials for cultural events.  The systematic order in which the colors are displayed resemble a visual representation of rhythm in the form of a pattern.  These tests were unclaimed for a period of six months,  raising the issue of wastage in corporate and present day society.  The origin of the components of this work reference the site of the exhibition, an empty office space. 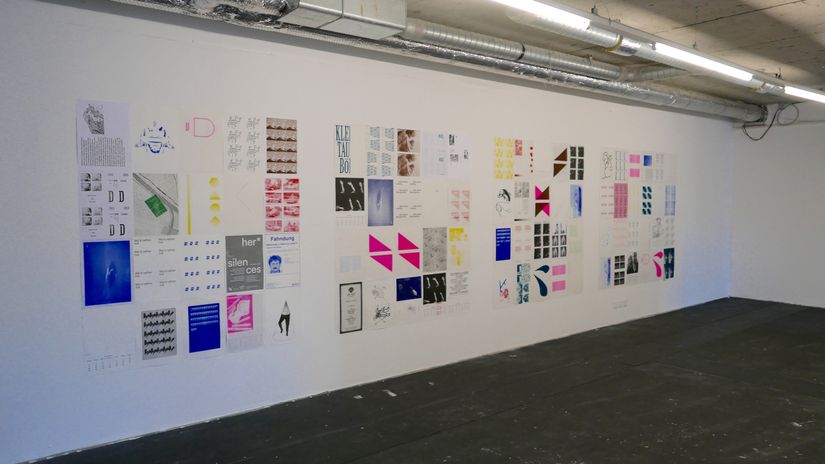 Also strongly alluding to the function of the site is Indonesian artist collective Tromarama’s installation, 24 Hours Being Others.  Three printers are placed on ascending shelves, directly referencing contemporary working culture through the use of standard office equipment.  The printers are recurrently printing out sheets of paper that spell out poetic texts about modern life.  The repetitive motion can almost be seen as a metaphor for the urban workforce, constantly churning out results of the same tasks on a daily basis.  It also speaks to the monotonous nature, often associated with typical desk jobs.  Viewers are encouraged to pick up the sheets of paper and engage with the installation, providing a more immersive experience and once again reflecting a larger polyrhythm in play. 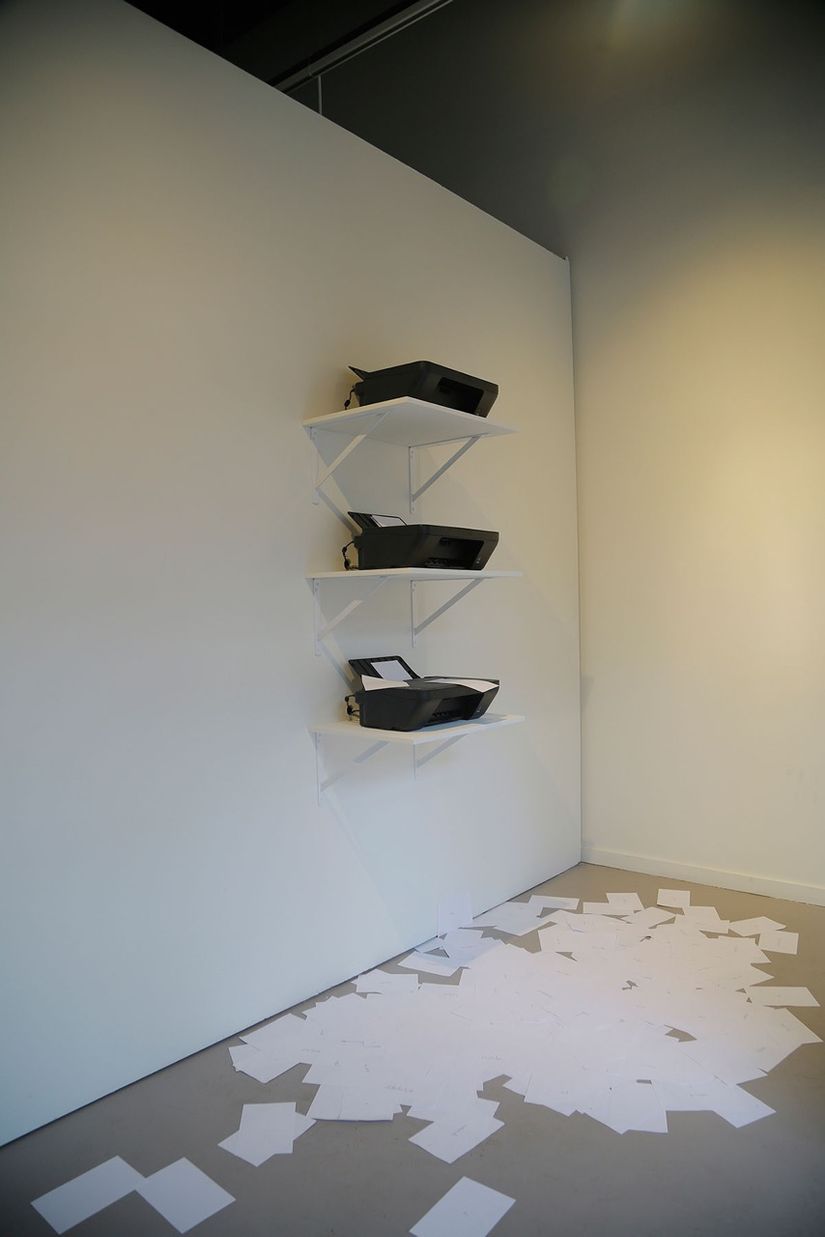 Other works on view sure to attract the public include the massive sculpture composed of stacked drums, entitled Monument by Nick Crow and Ian Rawlinson, artists from Manchester and Berlin.  While Monument ponders rhythm in a musical sense, One Square Mile does so geographically.  This film by local Manchester artists Chris Paul Daniels and Sam Meech, uniquely captures the cityscape of Manchester, exploring a range of areas that add contrasting dimensions to the city.  Katerina Eleftheriadou, also from Manchester, creates Natural Border, in which she uses garlic cloves to make street signage and pedestrian crossings that we encounter every day, in every city.

Globalization, cross cultural movement and urbanism are undisputedly correlated and converge in our understanding of urban development.  The condition of diversity is what enables polyrhythms to exist.  In regards to this exhibition, diversity is defined by the juxtaposition of artists from the east and from the west.   Their backgrounds may be different but their art is centred around a unified theme and illustrates similar stories.  As audiences bring themselves into this space they are able to merge their own rhythms with that of the artists’.  The demographic of the audience, as that of the group of artists, is a diverse one, the interaction of which enables the creation of Polyrhythmia.

Polyrhythmia is on view from November 29th 2017, More information about can be found here.

Concerns of Now: ‘Cinerama’ on View at Singapore Art Museum...