Poised uniquely between the East and the West, Dubai has seen intense levels of artistic and cultural development over the last 20 years. Economic free zones were established, and Christie’s opened in Dubai to host their first auction of modern and contemporary art in the Middle East in 2006. Due to an expanding expatriate population, Dubai’s burgeoning arts scene has grown to include the initiation of galleries, non-profits, and institutions. These cater to diasporas, new discourses, and generate new modes of artistic exploration.

As a result of its transformation into a center for commercial art, fairs such as Art Dubai and events such as Dubai Design Week have flourished, with Downtown Design additional taking the title as the Middle East’s leading design fair.

Whilst Dubai is known for having head-turning supercars ripping through their streets, more practical options include taxis and the metro. Dubai’s taxis are available to hail nearly everywhere at just about any time, day or night, with apps such as Uber and Carreem accessible from your smartphone. Dubai also has a world-class, fully-automated, driverless railway system. Most of the metro rides above ground providing a great view while you travel to landmarks like the Dubai Mall, Dubai Marina, the Gold Souk and Dubai's financial district (DIFC). Tickets must be purchased in the form of a Nol card that also works for buses, trams, and even taxis. Now, you can even use your smartphone as a Nol card! 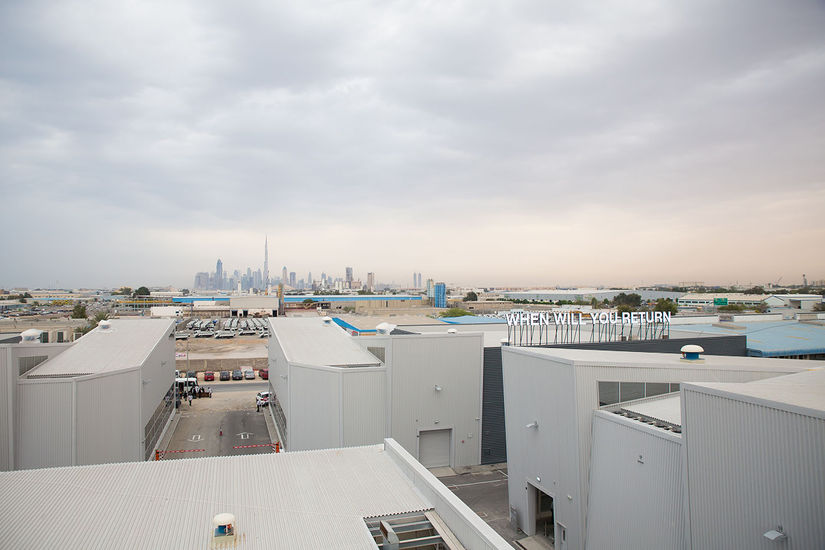 Alserkal Avenue is the renowned cultural district of contemporary art galleries, non-profit organizations, and homegrown businesses in the Al Quoz industrial area of Dubai. Spread across 500,000 square feet, Alserkal Avenue is a vibrant community of visual and performing arts organizations, designers, and artisanal spaces that have become an essential platform for the development of the creative industries in the United Arab Emirates. Alserkal Avenue has allowed the Dubai arts scene to thrive over the last decade, providing a consolidated home to an array of over a dozen galleries, 60 design, artisanal and performing art spaces, non-profits, and institutions. 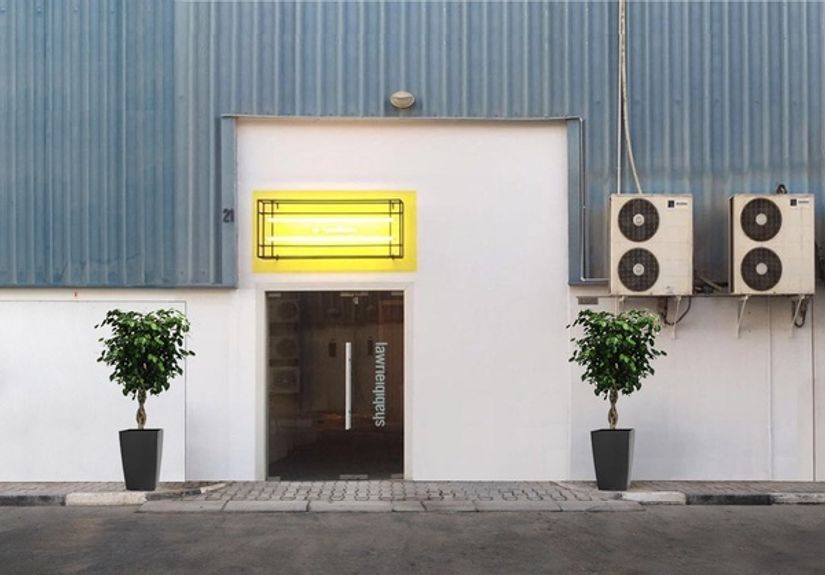 Lawrie Shabibi is a contemporary art gallery that seeks to promote the long-term development of young international contemporary artists, whilst focusing on those from the Middle East and North Africa. They organize historical exhibitions, collaborating with artists from older generations, and work together with curators, institutions, museums and collectors. 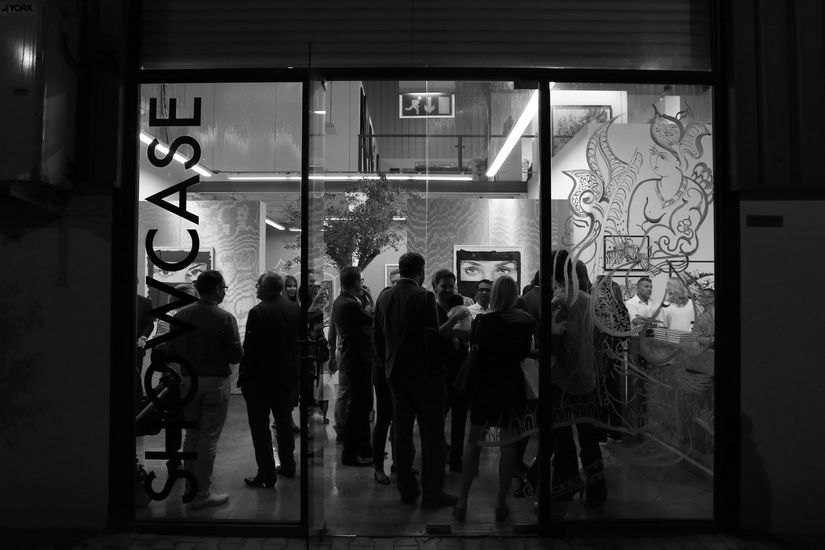 Showcase Gallery was established in the 1990s, making it one of the first established galleries to in the UAE. It has been run by Sharon Harvey for the last 14 years, who has grown Showcase to become one of the foremost contemporary art spaces that specializes in works from accomplished Middle Eastern and African talents. They even have an in-house framing service, with over 300 framing options and a framing team on hand. 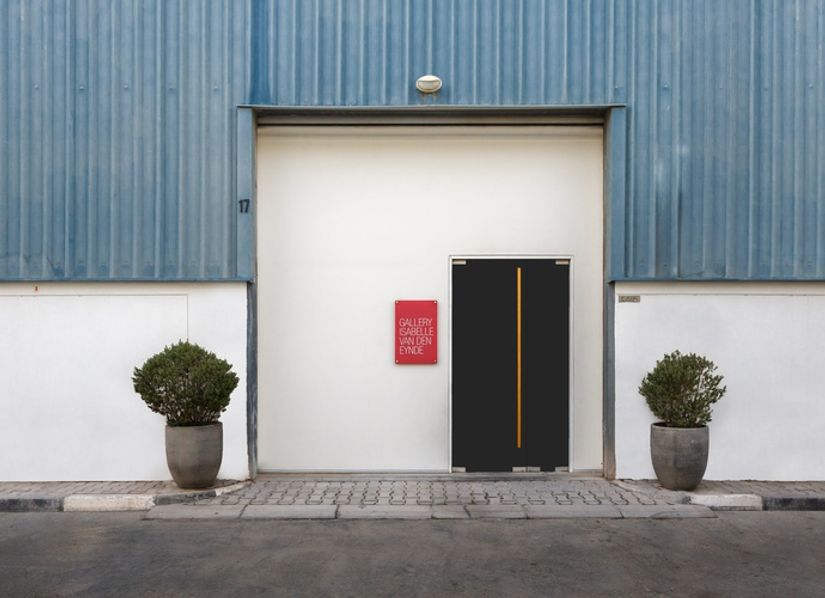 Isabelle van den Eynde established B21 Gallery back in 2006, one of the first contemporary art spaces in the UAE. She then went on to launch her eponymous space, Gallery Isabelle van den Eynde, in Alserkal Avenue in 2010. The gallery prides itself on closely collaborating with its artists to create insightful and often provocative presentations, challenging the conventions and ideologies related to the notion of art display and exhibition making. 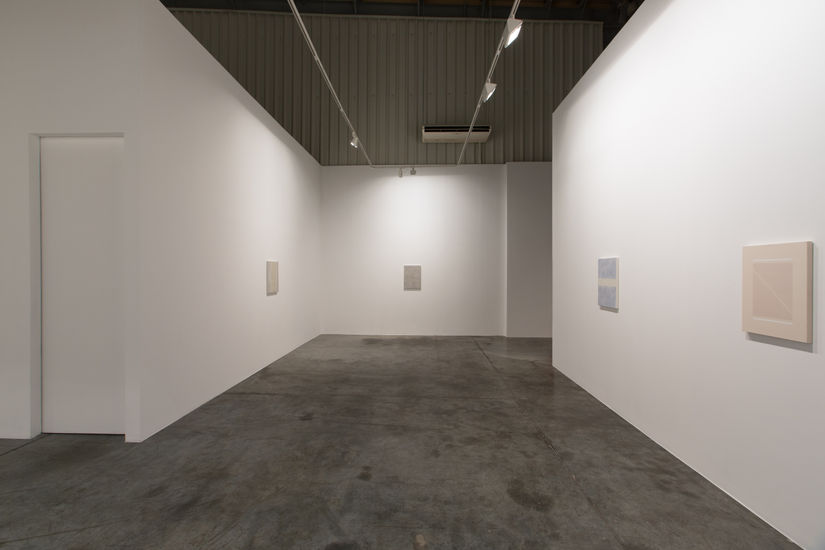 Grey Noise represents a selection of contemporary artists and focuses on works from South Asia, the Middle East, and Europe. Since their inception in 2008, they have built a reputation as a space for experimental and cutting-edge art from the region. Whilst they represent a small selection of artists such as Caline Aoun and Michael John Whelen, their rosters are of a carefully curated nature. 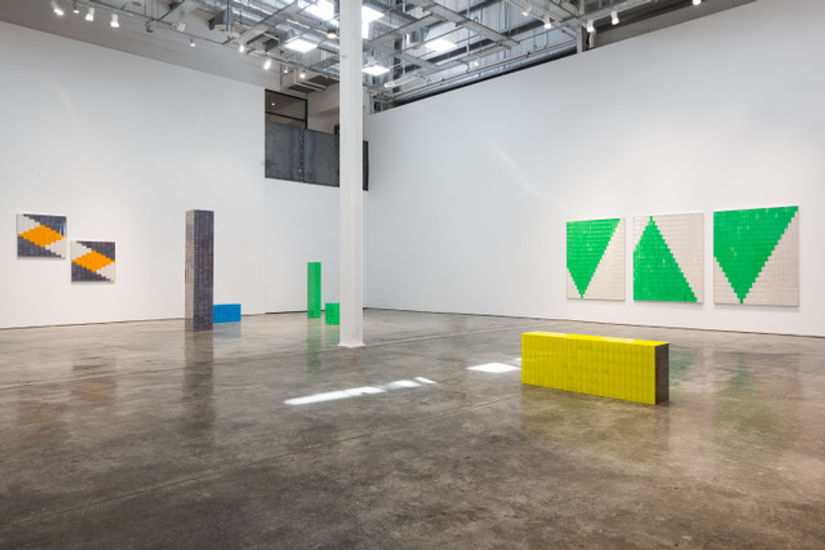 Image courtesy of The Third Line

The Library by The Third line, launched in December 2018. Their Library serves as a platform to promote the work of rising artists and designers from the region. In addition to the gallery’s current offering of artist monographs, exhibition catalogues, and magazines, The Library stocks limited edition objects and prints by artists from the gallery’s roster as well as other local and regional designers. 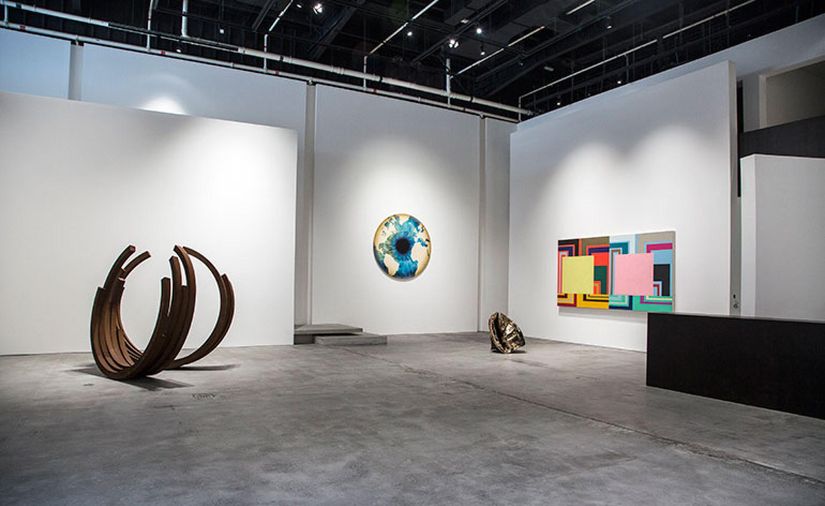 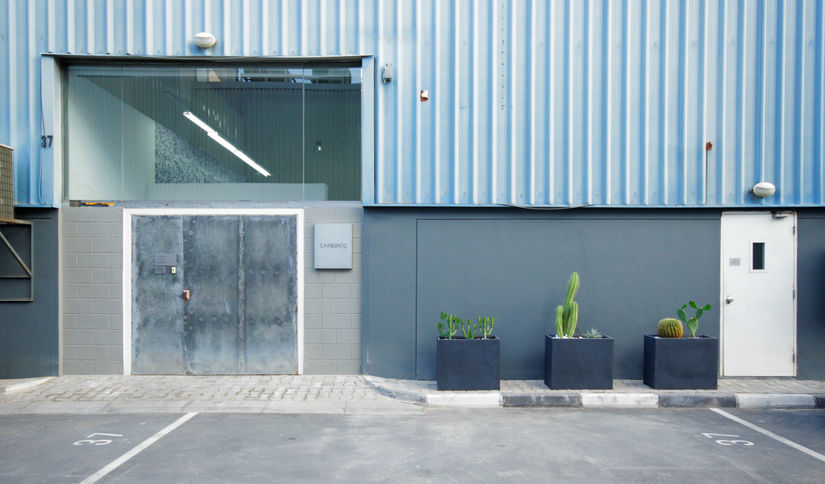 Carbon 12 was established in 2008, initiating a comprehensive, firmly global, program of institution-grade artists. Internationally active, Carbon 12 continuously introduces and promotes both established and emerging artists to the UAE contemporary art scene, supplementing its 6-8 annual exhibitions with diverse contextual activities including publications and talks that actively engage the public and educational institutions. The playful, organic process that constitutes the creative production of Carbon 12’s artist base is facilitated and mirrored by its location in Al Quoz.

Ayyam Gallery was founded in 2006 and has evolved to become a leading arts organization that pushes a diverse range of emerging and established artists. Recognized as a blue-chip art space in Dubai, they have collaborative extensively in countries such as the United States, Europe, Africa, and Asia. 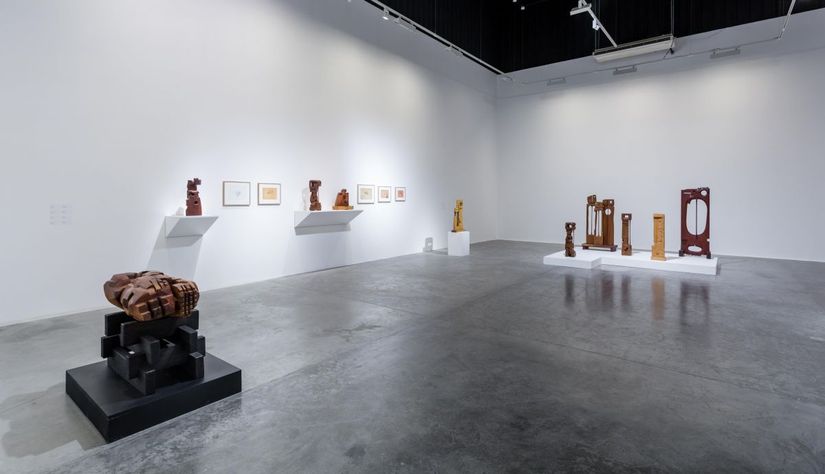 Having been active in the UAE for nearly 4 decades, Green Art Gallery relaunched in 2019 as a contemporary art space. Their programme feature a multi-general mix of artists from the Middle East and beyond. What began as a salon d'art has evolved into a contemporary art space that represents a multi-generational mix of artists from the Middle East, North Africa, South Asia, Turkey and beyond. 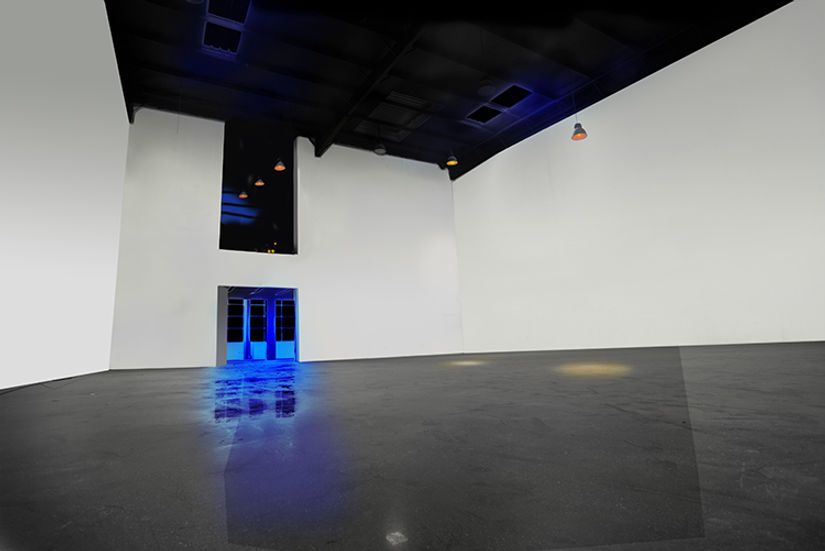 1X1 Art Gallery has presented Indian Modern and Contemporary Art to the UAE for over two decades. Founded by Malini Guirajani in 1996, they are now based in an impressive 7,500 sq. ft. warehouse space in Alserkal Avenue. They collaborate Internationally with art fairs, galleries, and museums, as well as with independent curators and art organizations. 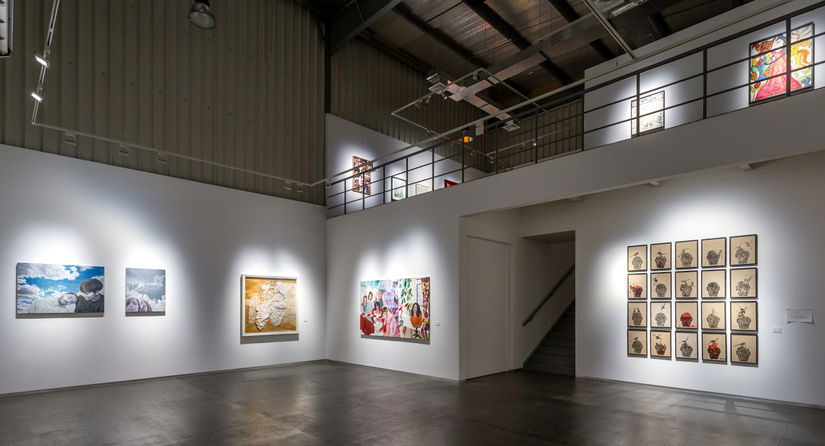 Elmarsa was founded in 1994 in Tunis and expanded to Dubai in 2015. Specialized in both modern and contemporary North African art, it represents recognized 20th century artists as well as mid-career artists. Elmarsa participates in several international art fairs in Dubai, Abu Dhabi, Paris, London, Marrakech, Miami and New York.

La Galerie Nationale is a gallery that focuses on ‘Original Art Furniture’, made by top designers of the 20th century. With twenty years of experience in France and Europe, they seek to promote outstanding designs and exceptional objects to collectors. 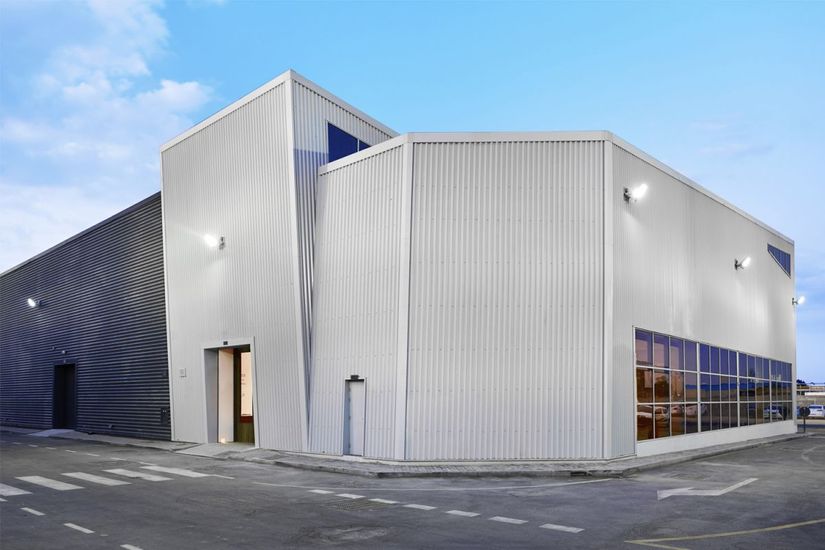 Since its initiation over three decades ago, Leila Heller Gallery has gained worldwide recognition. They have pioneered dialogues and exchange with Western, Middle Eastern, Central and Southeast Asian artists. In addition to presenting a dynamic exhibition schedule, the gallery actively organizes shows with world-renowned curators, hosts educational panels and film screenings, and produces catalogs and books with scholarly essays. 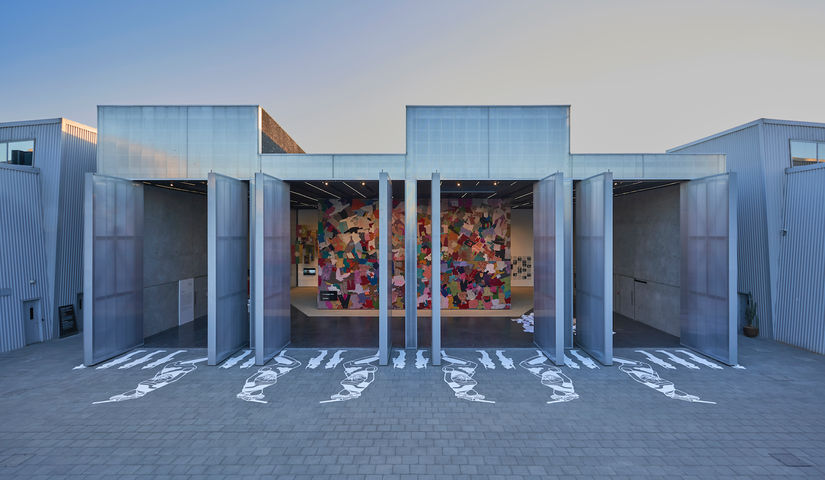 Concrete is a multi-disciplinary space conceptualized and programmed by Alserkal. Concrete was inaugurated in 2017 as the first building in the UAE to be completed by the Office for Metropolitan Architecture (OMA), founded by Rem Koolhaas, and is an adaptable venue whose ability to metamorphose to bring creative visions to life makes it suitable for international, museum-grade exhibitions as well as events across art, design, fashion and the performing arts. 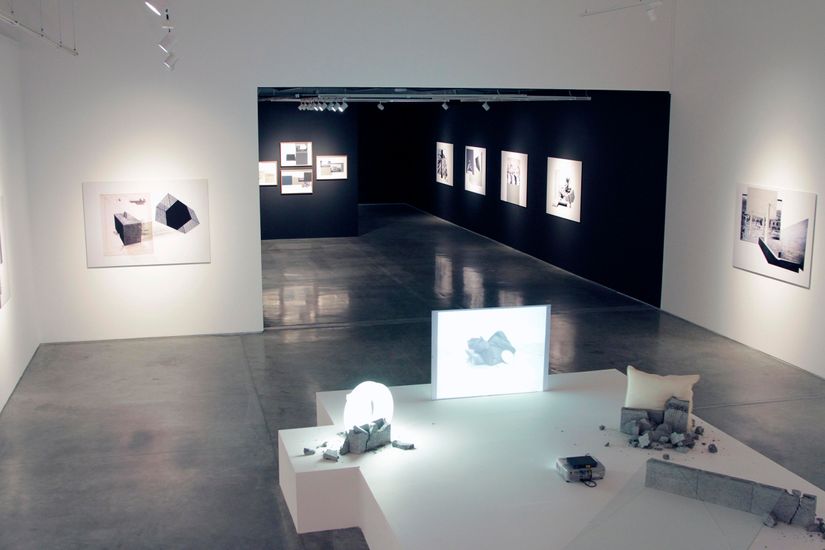 The Salsali Private Museum was the first private museum for contemporary Middle Eastern and international art in Dubai. Founded by Ramin Salsali in 2011, the Salsali Private Museum is located in the industrial area of Al Quoz in Alserkal Avenue, a complex with the highest concentration of galleries and creative spaces in the region. It aims to contribute to developing the UAE and Dubai as an evolving hub for arts and culture in the Middle East. 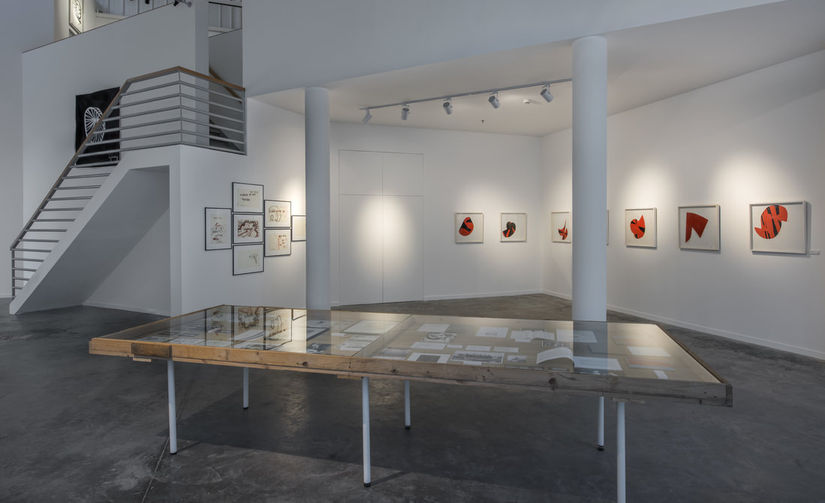 JPNF is an ICOM registered private museum presenting abstract European and American art from the 1960s through today. Presenting three exhibitions a year, the JPNF is also home to a remarkable archive tracing forty years of artist-collector exchanges. Education is central to the museum's mission. 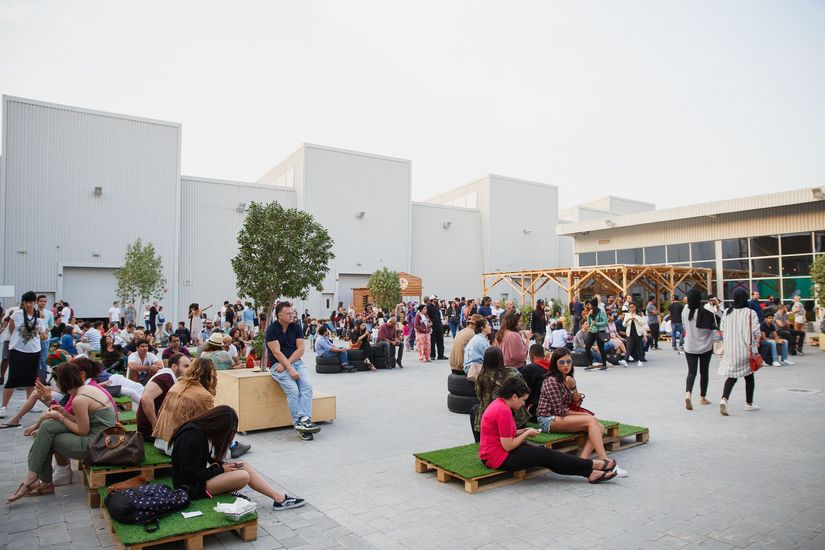 Ishara Art Foundation focuses on contemporary art in a South Asian context. They define the region expansively, including diasporas and overlapping histories of India, Pakistan, Bangladesh, Sri Lanka, and Nepal. They seek to bring new and established practices to Dubai’s diverse local and international audiences through solo and group exhibitions, sharing new commissions and touring exhibitions. 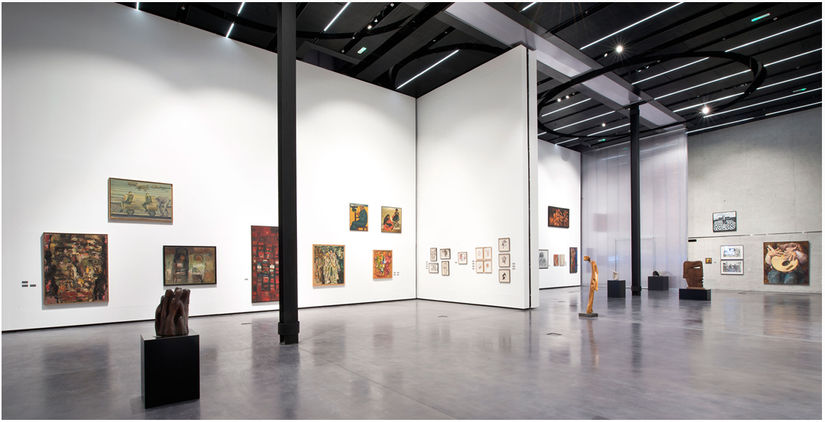 Atassi Foundation was founded by Sadek and Mouna Atassi to promote Syrian art and culture. Atassi foundation aims to celebrate Syrian art by exhibiting it, enhancing its global visibility, and supporting creative production of young talents. They achieve this by organizing and curating exhibitions, fostering intercultural exchange in collaboration with international arts and culture institutions, and by supporting research and publications on Syrian art and culture. Our ambition is to create a sustainable and informative platform for Syrian artistic expression and knowledge.

In 2018, Serie Architects unveiled their design for the Jameel Arts Centre in Dubai. Made up of two clusters of white boxes and located on a small manmade island at the Jaddaf Waterfront, it has specifically been designed to be understated and to not be “very Dubai”.

Jameel Arts Centre is dedicated to exhibition-making and research in the contemporary scope and has an extensive education programme for all ages. It is one of the first contemporary art institutions in the city of Dubai. 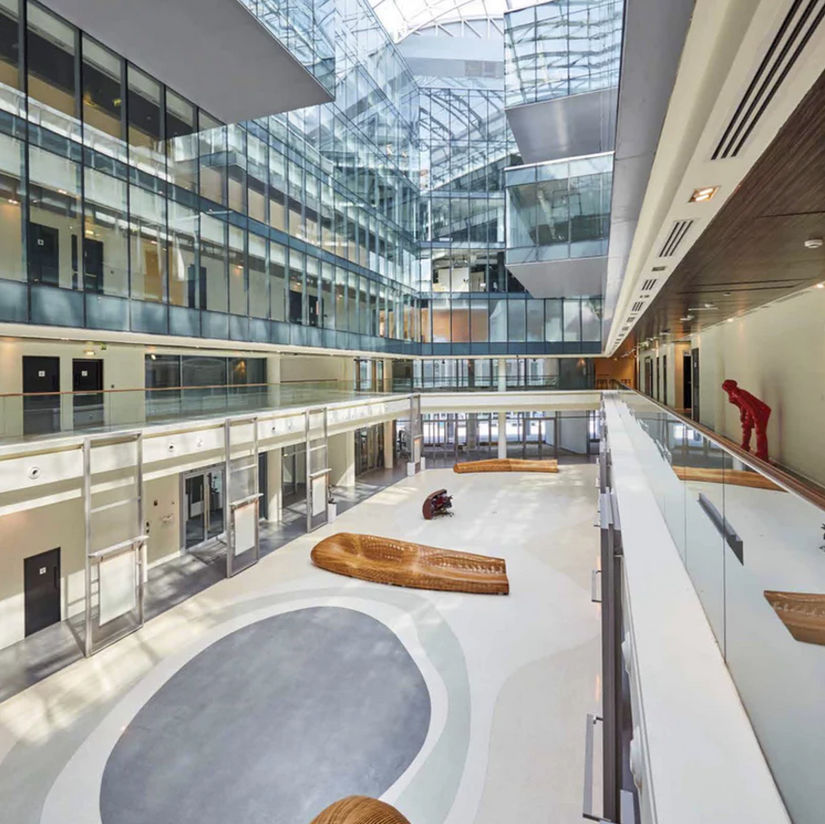 Dubai Design District is also home to the Middle East's leading design trade fair, Downtown Design, that happens in November, with over 175 premium design brands across the world. Expect exhibitions, pop-ups, public installations, product launches and open houses over the course of this buzzing week.

Formerly Artspace Dubai, Tabari Artspace was founded in 2003 by collector Mariah Tabari. They seek to promote Middle Eastern art to a global audience, whilst creating fresh discourses and cultivating an international community that is centered around contemporary Middle Eastern Art. They have also played a pivotal role in building the careers of Middle Eastern Masters. 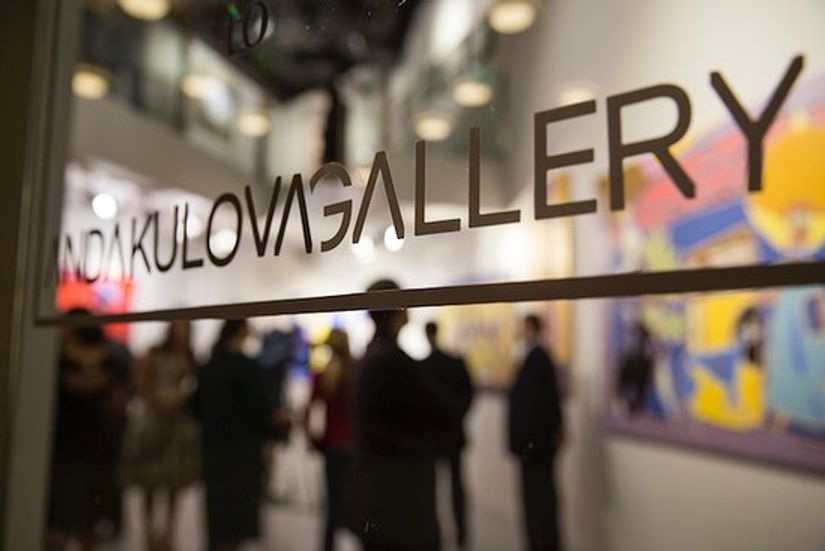 Andakulova Gallery’s seeks to promote the contemporary art of Central Asia. They provide a platform that allows emerging and mid-market Central Asian artists to exhibit, further supporting them by cultivating dialogues with them and the Middle East. They carry out continuous and extensive research to find new talents, continuing to build relationships between artists, writers, specialists and collectors.

Whilst their expertise lies in modern and contemporary Arab and Iranian art, Meem Gallery has its focus on works by Middle Eastern modern masters. Founded in 2005 by Sultan Sooud Al-Qassemi, Mishal Hamed Kanoo and Charles Pocock, the gallery deals with primary and secondary market sales. Works by the artists they represent can be found in the collections of International museums and institutions such as the British Museum, London; Guggenheim Abu Dhabi, UAE; Centre Pompidou and Institut du Monde Arabe, Paris and LACMA, Los Angeles. 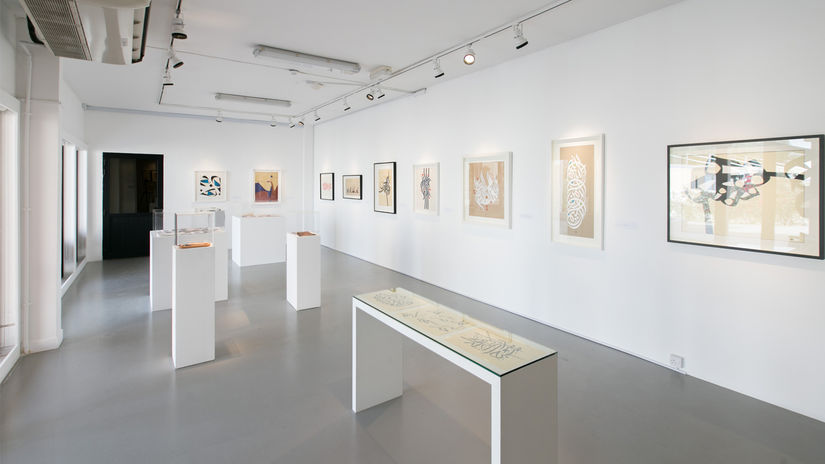 Since its initiation in Dubai in 2008, Tashkeel has provided a nurturing environment for the growth of contemporary art and design practices rooted in the UAE. They have constructed multi-disciplinary studios, workspaces, and galleries located in both Nad Al Sheba and Al Fahidi, enabling creative practice, experimentation and dialogue among practitioners and wide communities.

Rue Kothari of Downtown Design: “Being able to establish a unique identity and communicate that in an effective way is crucial”