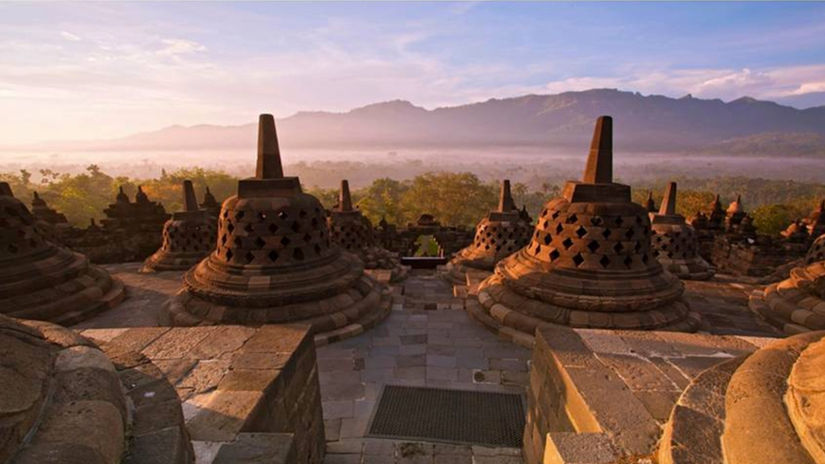 Artists from all over Indonesia and beyond have for years flocked to Jogja to plug into and contribute to the vibrant artistic community, making it a city that pulsates with creative energy wherever you look. Unlike a number of other art centers in the world, the vibe in Jogja is casual, down-to-earth, open and welcoming to anyone who has a genuine interest in learning about the scene.

This openness starts with the artists themselves, most of whom are affiliated with studios made up of a number of artists from different generations. These studios or collectives, create organic incubators where artists exchange ideas, techniques and provide support, mentorship and shared professional networks. Artists want to share with visitors what is going on and what they are making - whether they are young graduates from the art school or internationally lauded, giving the city and its people an amazingly grounded and authentic feeling. Everyone joining in and sharing their time and resources is an approach that is often called the village, or the Kampung, but really it just means a commitment to acting as a community.

There is always something going on, day or night, however one difficulty can be finding out what or where, as websites are not usually up to date. Instead, most happenings and openings are spread by word of mouth - so wherever you go just ask. People here are generally always happy to pass on his or her advice as to where to head next and where to meet later.

In terms of getting around, I would highly suggest that you book a driver for around $50/day. The art spaces are all over the city, and you will soon learn that addresses are often subjective – so having a local driver to whizz you around is a huge asset, if not a must.

A good time to go to Yogyakarta is in May during the artist-run art fair ARTJOG. All the studios open up and the rest of the art institutions have events and exhibitions throughout the days and nights.

There are some good places to stay in Jogja (and unfortunately more and more being built in the centre with little aesthetic thought). A new cool addition to the scene is Greenhost Boutique Hotel (which also has a good bar). A basic but comfortable alternative on the same street is Gallery Prawriotaman Hotel. On the higher end and a little further out is The Phoenix Hotel. There is also d’Omah Hotel owned by the charming Warwick Puser who came to Yogyakarta for his honeymoon and never left (and who knows all there is to know about the Indonesian art scene in the city and beyond).

Vegetarian restaurant Milas is a must. Set in a lovely garden, even the most assured meat eaters will be happy and satisfied at the end of a meal here! It is only open for dinner. Bu Ageng is a great option for lunch. Local, clean and simple food for an amazing price (think $5!).

Cemeti Art House (Rumah Seni Cemeti, Jl. D.I. Panjaitan 41, 55143) was the first gallery in Indonesia to support artists beyond individual exhibitions and endeavor to make them known abroad, and it believes strongly in the social and political significance of and potential for art. The gallery organizes exhibition projects, alongside solo and group exhibitions, performances, discussions, presentations of the residency programs and artists’ talks which engage local and international artists, writers, art activists, curators, and art managers. The emphasis is on keeping different disciplines in dialogue with one another and to open channels of ideological and practical exchange within and outside of the city.

Ace House Collective (Jl. Mangkuyudan No.41, Mantrijeron, Daerah Istimewa, 55143 ) started in 2011 and is a collective active in the field of youth-pop culture that emphasizes the exploratory approach, both in theory and practice, conceptually and contextually, as well as finding the possibilities on visual art perspectives. The members of the collective are fun and boisterous. They use cheeky humor to pry apart accepted notions about how the art market and those involved conduct themselves.

Kedai Kebun Forum (Jl. Tirtodipuran No. 3, 55143) is a fun, bohemian, independent, alternative art space managed by artists. A space for all cultural activities to coexist, it is home to a gallery, performance space, bookshop and restaurant. The mission of the space is to provide an area of cultural experimentation. By learning and studying there, the boundaries between traditionally diverse practices are broken down, allowing for creativity to flourish. There is a strong commitment to and focus on developing art that is socially transformative. 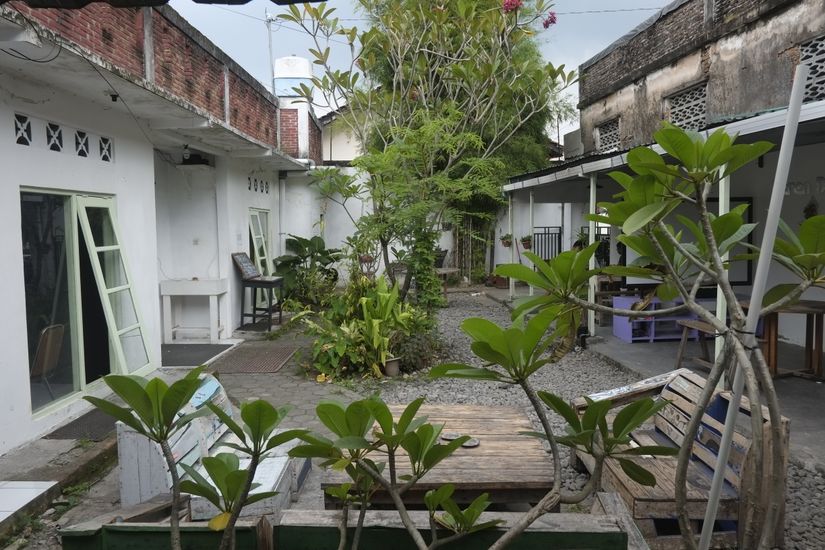 Ruang MES 56  (Jalan Mangkuyudan, No 53 A, Mantrijeron, Yogyakarta, Indonesia, 55143) is a non-profit institution, which is run by MES 56 artist collective. Ruang MES 56 works cooperatively with communities and networks in managing a house as a working studio, learning classes, as well as playground and living space. Found in 2002 through self-funding, this community concentrates on the development of photography and contemporary art, while also intersects with other disciplines, critically and contextually, in order to promote open, creative and independent society.

Langgeng Art Foundation (LAF) (Jl. Suryodiningratan No.37, Suryodiningratan, Mantrijeron, 55141 ) was founded in 2010 to support contemporary art production, discussion and presentation. LAF focuses on art exhibitions of both local and international artists, commissioned works/special presentations, an artists' residency program for foreign artists so that they can hold dialogues and collaborations with their Indonesian counterparts, and a public lecture series. The lovely white galleries are punctuated by a café and an internal garden that is perfect to hang out in as a pause to your day.

SaRanG (Kalipakis Rt 05/ll, Tirtonirmolo, Kasihan Bantul, 55180) is a non-profit contemporary art organisation launched to facilitate the creation and presentation of artwork and to foster cultural discourse regarding the development of art practices in Indonesia. Like Langgeng Art Foundation, SaRanG seeks to support the artists that they work with through their broad network of resources, both local and international.

Bentara Budaya (Jl. Suroto No. 2, Kota Baru, 55224) is one of the oldest art spaces and exhibition halls in Yogyakarta. It is different from other art organisations currently in operation, as alongside its role as a platform for emerging artists to exhibit their work, Bentara Budaya regularly organises a variety of cultural events such as film screenings, cultural performances and monthly art lectures and discussions.

Sangkring Art Space (Nitiprayan RT 1 RW 20, No. 88 Ngestiharjo, Kasihan Bantul, 55182) was founded by Balinese painter Putu Sutawijaya in 2007. Spread across two floors and more that 500 square meters of space in the famous artist village of Nitripayan, the space has become a centre for modern and contemporary art in Jogja. The mission of Sangkring is to showcase the best of contemporary Indonesian art alongside younger and more experimental artists.

Jogja National Museum (Jl. Prof. Ki Amri Yahya No. 1, 55253 ) was the first contemporary art museum in Indonesia. Founded in the early 2000s, the museum is a non-profit foundation for the development and conservation of visual, performing and multimedia art and culture. The museum is situated in a former complex of the Art Institute and consists of a number of buildings, including the Citizen Hall, where artists are able to exhibit their work for free. In addition to exhibition spaces, the museum has renovated artists studios, and sleeping quarters for an artist residency program.

Taman Budaya Yogyakarta  (Jalan Sriwedani No.1, Ngupasan, Gondomanan, 55122) means ‘the window of Yogyakarta.’ It is a multipurpose creative space that endeavours to be the main cultural centre of the city. The organisation consists of two buildings: the Concert Hall which serves as a space for contemporary art and discourse, and the Societet Militar Building which focuses on performing arts, both traditional and contemporary.

Museum Affandi (Jl. Laksda Adisucipto 167, 55281) is dedicated to one of the best-known Indonesian modernist painters in the world. There are several galleries that show not only his work and some amazing self-portraits, but also delightful personal items. In addition, the entire building is actually designed by the artist himself (it was his house and studio from 1907-1990) and contains some marvelously unusual spaces.

Most artists in Yogyakarta work in studios together, often across generations and media, providing one another not only with technical support but also allowing for the exchange of ideas and sharing of networks. It is a rather unique ecosystem and this communal approach makes the feeling of creativity palpable in the city. If you have a particular artist whose studio you would like to see, the best way to do that is to ask – on social media or in their gallery. Below are some artist’s studios that make themselves available to be viewed when asked, but it is by no means a comprehensive list.

Grafis Minggiran (Gedongkiwo MJ I/1001, 55143) is a print studio that was founded by a group of students from the Indonesian Institute of Arts Yogyakarta. Many of the studio members are master printmakers, and while they each work on their own projects, they are always more than happy to keep the studio open to anyone interested in learning more about printmaking. The studio has initiated a residency program, working closely with Singapore gallery Yeo Workshop to encourage an exchange of ideas and techniques between Jogja and Singapore.

Studio Kalahan (Jalan Patukan 50, RT 1 RW 20, Ambarketawang, Gamping, Sleman 55294) is the fantastical studio of internationally recognized artist Heri Dono. The colonial Dutch building is laid out over two floors, pivoting around a huge, beautiful tree in a central courtyard. Heri Dono’s studio unfolds to viewers like stories from the page of a book. If you are lucky, the artist will be there himself to guide you around the works he has housed there, and fill you in on the Indonesian art world, past and present."

Kersan Art Studio (Jl. As Samawat no.154, Ds II RT06 Kersan Tirtonirmolo, Kasihan 55181 Bantul) was founded in 2009 with the purpose of providing a space of art production and interaction between artists, curators, writers, and academics. The studio holds regular exhibitions, art projects, music performances and also has an artist exchange and residency program.

Artists who are Pushing the Boundaries of Chinese Contemporary Art...

Exhibitions to Visit in 2017

Here's What to Expect at ART|JOG 10