Escher X nendo | Between Two Worlds is the first exhibition in the world to feature the extraordinary work of Dutch graphic artist M. C. Escher in dialogue with the work of acclaimed Japanese design studio nendo, led by designer Oki Sato.

Seamlessly presenting the worlds of one of the 20th century’s most recognisable artists and one of the 21st century’s most inventive designers, the exhibition features more than 150 of Escher’s most renowned prints and drawings from the collection of Gemeentemuseum in The Hague, presented in an immersive exhibition space designed by nendo, alongside never-before-seen work from the design studio.

Acknowledged as a master of optical illusion, Escher created some of the most iconic images of the twentieth century which intrigue viewers with their visual puzzles and challenge established notions around space, time and the everyday world. Escher’s work depicts impossible architectural structures, endless staircases and seamless transformations of form and pattern. His fantastical constructions and repetitive infinity patterns reveal a technical and inventive genius that in recent years has become increasingly revered and celebrated. 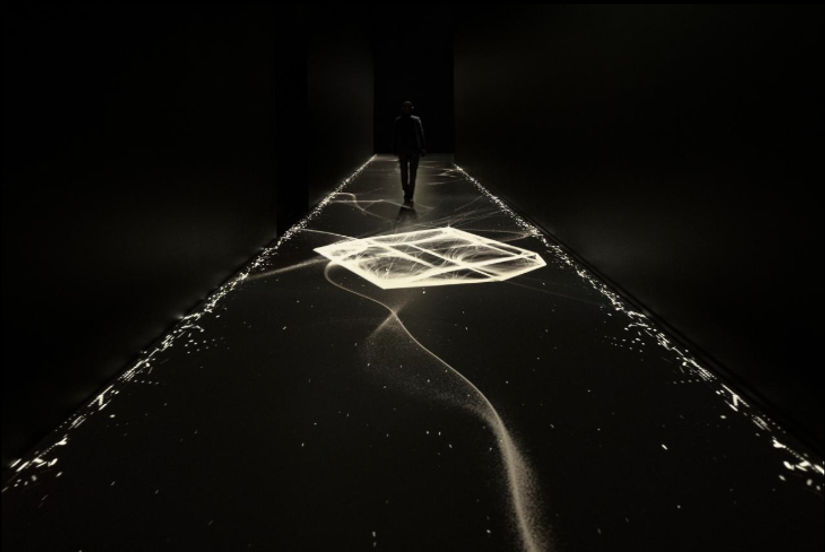 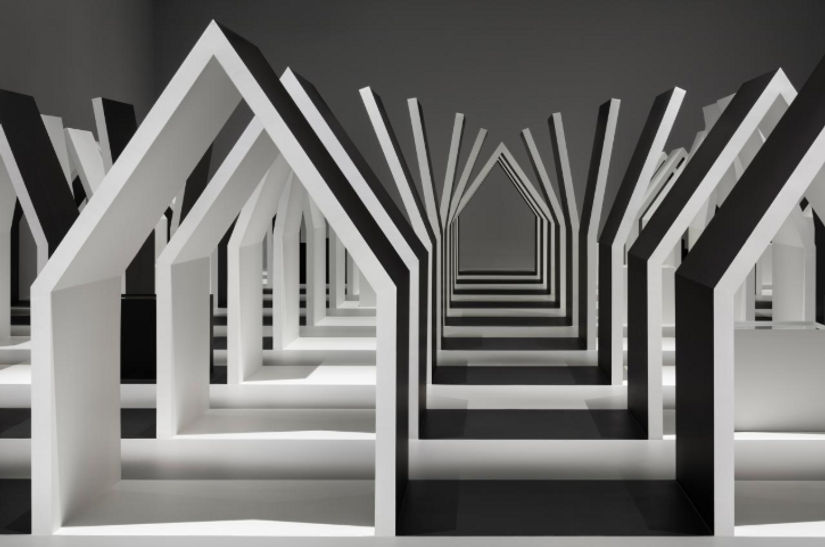 Building on Escher’s optical illusions to create an otherworldly spatial installation, nendo has taken cues from Escher’s manipulation of space and his use of shifting perspectives and playful visual devices. These have inspired the creation of an exhibition experience that transcends traditional gallery displays and manifests Escher’s world in a three-dimensional reality.

Nendo has devised a signature motif for the exhibition design—the minimalist form of a house—universally understood as an icon and symbol of space. The house appears throughout the exhibition in varied forms that reference Escher’s skillful manipulation of patterns as well as creating innovative displays for Escher’s work.

This split-level gallery explores Escher’s lifelong research into the ‘regular division of the plane’ and presents two distinct viewing experiences. The upper gallery provides both a display space for Escher’s works and a viewing platform from which the lower level can be contemplated. On the lower level, a house installation appears as a three-dimensional tessellation in which a row of four black houses gradually transforms into a row of five white houses. The roofs of the houses gradually open up and out, as if turned inside out, until the spaces exterior to the houses at the front of the gallery have become interior spaces at the back. While descending the ramp to the lower level, the viewers’ vantage point slowly changes until they are able to walk around and into the houses, as if stepping into a two-dimensional picture. Some of Escher’s works are presented in single display cases both within and alongside the houses, and visitors can take their own route through the gallery, discovering the works as they immerse themselves in the installation. 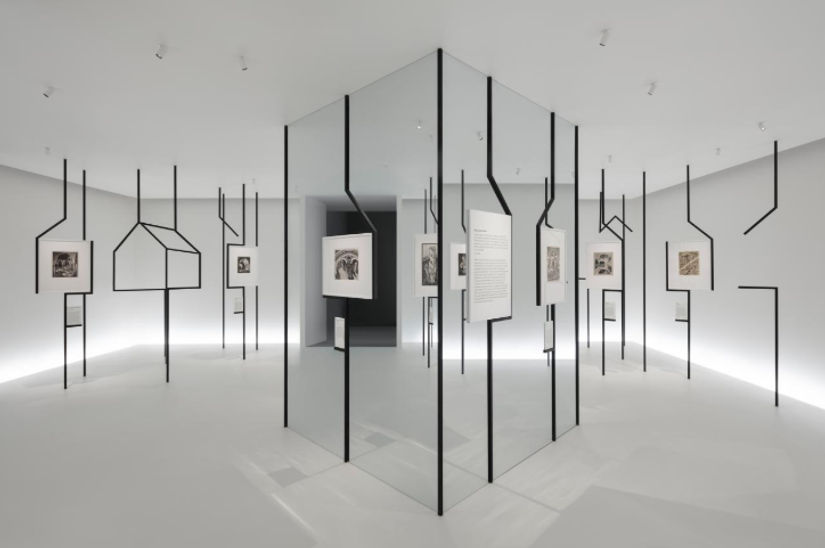 An immersive installation of black metal rods within an all-white gallery has been designed for this presentation of Escher’s works exploring extreme perspectives and optical illusions. The rods enable the works to be displayed in a new spatial arrangement rather than simply being mounted on the walls, and are arranged in a rhombus-shaped layout around a centrally placed mirror structure. At first glance the metal rods appear to be placed in a clutter, but when viewed from a specific angle a house shape before seen. 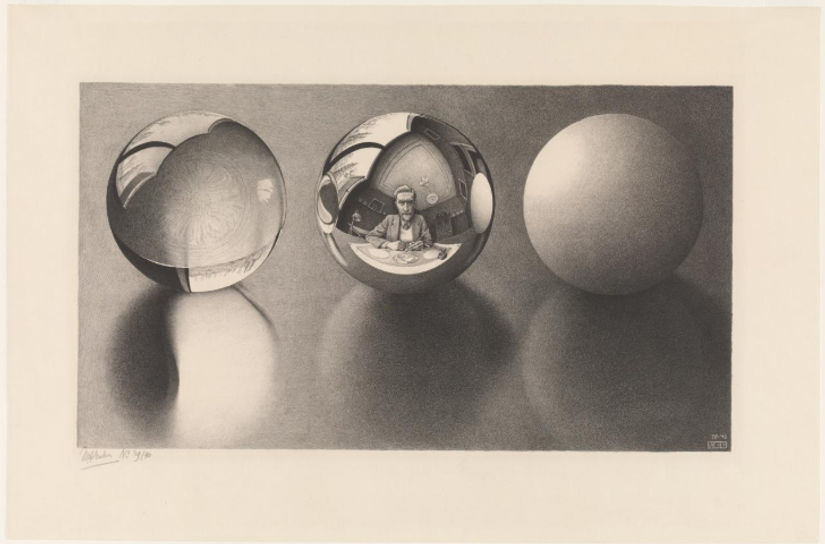 "Escher’s artistic practice, due to its complex play with space, logic and mathematics, has had an indelible impact on architecture and design for many generations. This rich legacy was the catalyst for the NGV to conceptualise the idea of pairing Escher with nendo. The exhibition provides audiences with a unique opportunity to explore how art can be perceived and experienced differently through the lens of design," said Tony Ellwood AM, Director, NGV.

"Escher’s logical, math-based ideas and interests have inspired nendo’s work process and served as a base for the creation of this exhibition design and new collection of works. The different installations vary in scale and in spatial impact, enabling the visitor to experience Escher’s world in a very physical way. It’s as if they are walking inside Escher’s mind, but seeing the exhibition through their own eyes," said Oki Sato, Chief Designer and Founder, nendo. 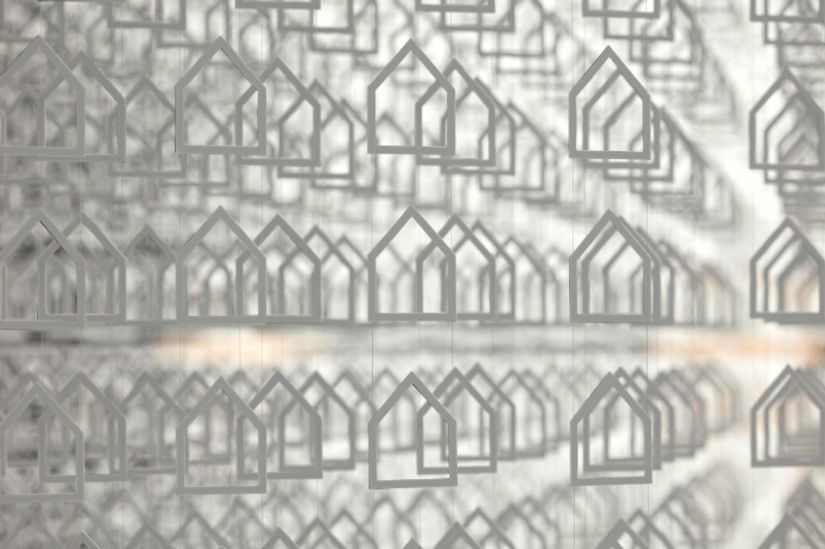 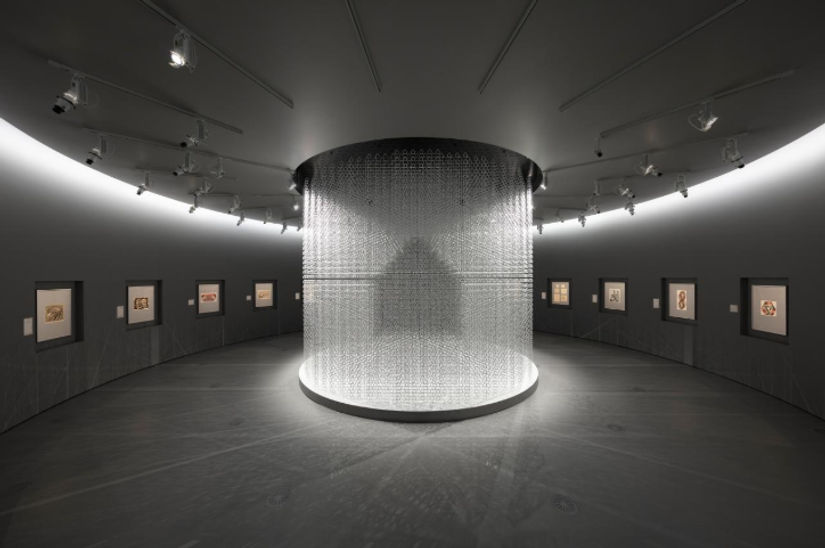 In response to Escher’s fascination with the representation of infinity, this gallery was designed as a circular space for the display of the artist’s endlessly transforming tessellations and impossible geometric loops. In the before seen of the room, a five metre–wide ‘chandelier’ constructed from more than 50,000 die-cut black and white houses is suspended from the ceiling. The inversion of colour in the middle of the installation forms a three-dimensional house shape that floats in the centre and changes its appearance according to the visitor’s vantage point. When viewed from the opposite angle this same image is in the opposite colour, requiring the viewer to complete a circuit around the gallery to fully experience the installation.

Escher X nendo | Between Two Worlds is on display until April 7, 2019 at NGV International.
For more information, click here.

Minimalism 101: The Only Minimalist Art Guide You Will Need...

The Most Influential Artists in Asia of 2018...

Why Context is Everything: Rirkrit Tiravanija’s Untitled (lunch box) at the National Gallery of Victoria

Get your Nendo "Fix" here!

Embark on a Lunar Exploration with Acorn Studio's LUNA