On the surface, the ordinary objects collected by the artist Zhu Jinshi during his time in apartment Ganjiakou 303 are very different from the heavy impasto strokes characteristic of his later oil paintings. Yet upon further inspection, it is evident that their purposes run parallel; each piece – a stacked pyramid of crumpled rice paper, a pile of woven baskets, archival material and oiled canvases – seems to be the embodiment or reflection of what Zhu has maintained throughout his career, regardless if the media were everyday household items, objects of suburban life, or what the critic Li Tuo has deemed “thick paintings”.

Named after his old home, ‘Ganjiakou 3o3’ is Zhu’s first solo exhibition in Shanghai and is poised to present a series of paintings and installations rendered from 1979 to the present day, each dealing with aspects of intimacy and the paradoxically public nature of Apartment Art. Over 20 of Zhu’s projects have invaded Pearl Lam’s Shanghai gallery space (divided into three thematic segments) which will be on display from 25 March to 15 May 2018. 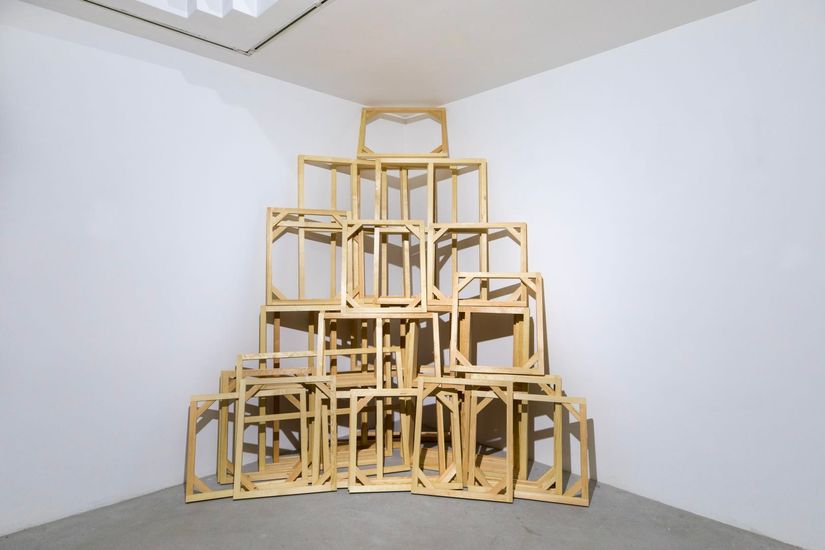 Between scattered found objects and gestural oils, each gallery corner is filled with intent. The first segment of Zhu’s exhibition shows, for the first time, ten of the artist’s restored Apartment Art installations from the mid-1990s, including his well-known pieces The Ward, Clock, Temporary House, and Landscape Legal Case. The reproduction of a room from the actual Ganjiakou 303 apartment, where Zhu first made these pieces, can be found as an independent space inside the entrance on the right side of the gallery, complemented by a wall text relaying the ideas and discussions Zhu had with his artist friends whilst living there. 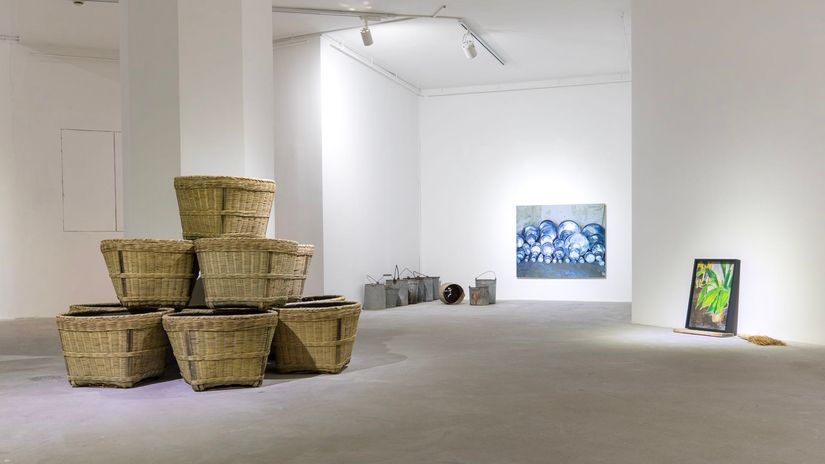 Alongside the apartment replica are Zhu’s reflections on the art historian Gao Minglu's theorization of Apartment Art, situated in the gallery’s main space. Gao suggests that compared to the more mainstream contemporary artworks, particularly those acquired by museums or other arts institutions during the 1990s, China’s blossoming period of Apartment Art provided more thought-provoking simplicity, as the essence of such work “dwells within an artist's innermost being”.

Minglu, who is coincidentally the curator of Zhu’s exhibition, highlights the artist’s projects through an examination of “personal living environments”, namely, depictions of one’s family, clothing, memories and necessities. Low-budget, small-scale and often ephemeral, Zhu’s work recalls the inseparable relationship between artists and their roots, while willfully confronting the firm rigidity of both domestic and international art infrastructures. 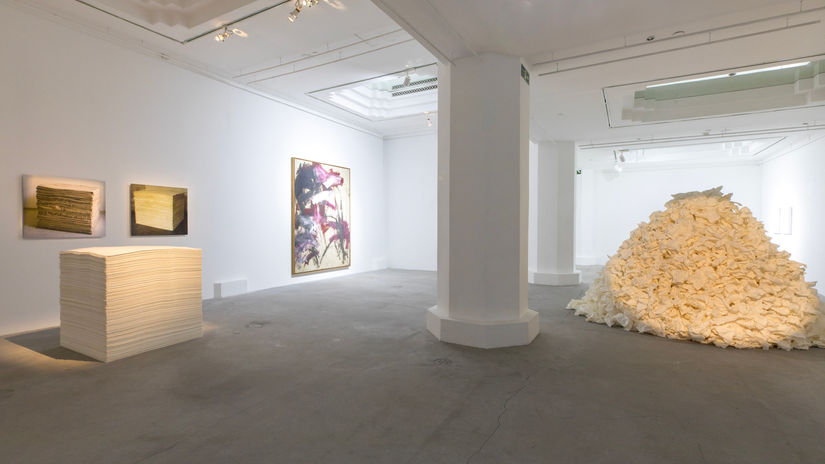 Minglu notes that Apartment Art found its foothold 1994 and 1997, the period that Zhu just so happened to inhabit his Ganjiakou Apartment No. 303 with longtime friend Qin Yufen. It was not until 1994, when the two returned to China from Germany, that their Beijing flat became a platform for avant-garde art in the city. Offering one’s home as a creative or exhibtionary space, the artist notes, provided China’s avant-garde artists with a sanctuary away from the government’s strong political gaze and control; over the past four decades, small apartments, separated from any structured conception of artistic display, became a hub for marginalized groups and art forms.

A great number of other artists, critics, directors, and entertainers were frequent guests at the Ganjiako flat: notably, Wang Peng, Song Dong, Wang Jinsong, Cang Xin, Zhang Lei, Karen Smith, and film director Ma Yingli among others. They were drawn together for evenings of lively discussions, leading more often than not to self-curated (and self-funded) exhibitions. At the same time, other prominent Beijing-based creatives started erecting Apartment Art havens, including those popularized by artists of the Dongcun Village and New Measurement Group. Here, exhibitions took the form of salon-style forays and interactive performances, making use of all available living spaces to conduct innovative exchanges in Shanghai, Hangzhou, and Guangzhou. 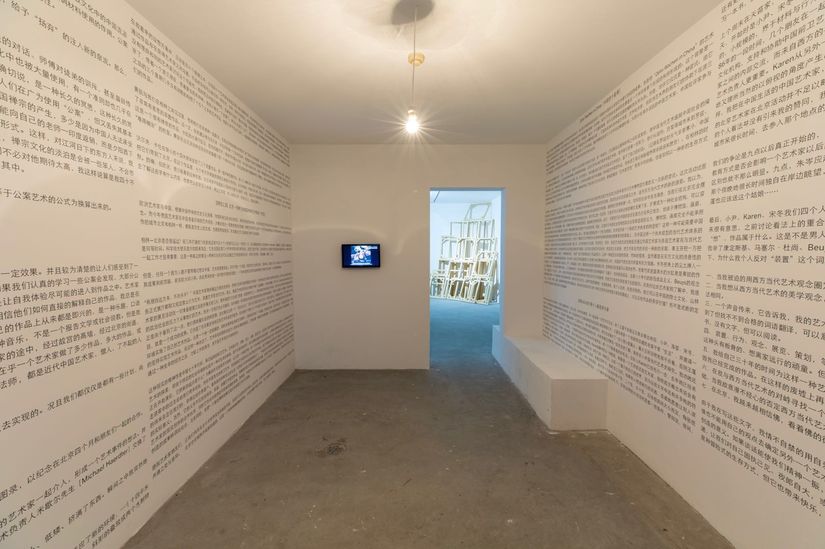 Disconnected in medium, yet analogous in concept, is the third section of Zhu’s exhibition, built up of newer paintings arranged in Pearl Lam’s basement gallery. In the likes of the artist’s own home studio, the display seamlessly mirrors the physical constraints of an apartment space, nodding to the domesticity of the found objects on the floor above. While Zhu’s installations are simple, intuitive, practical, and readily accessible, his paintings demonstrate an abstract aggressiveness or chaos that offer glimpses into the artist’s wealth of personal experience and openness to sharing it with others.

Zhu demonstrates that a contemporary exhibition need not be about commercialization or sales; it need not be exhibited in other public places, or even accepted by popular culture, which, for most contemporary artists, are seemingly unavoidable issues. Rather, focus must lie on creation, gesture, collection and preservation, and in turn, on highlighting precious or personal tokens for one’s self. While collaboration and friendship were inherent results of Apartment Art events, Zhu, Minglu and Pearl Lam tell visitors that gaining entrance into an artist’s personal space is something exclusive, something special.

"This mixture is a dilemma but also a connection; it is a confrontation but at the same time a harmony. In fact, we can’t escape from this mixed feeling – it is like this shore and the other shore."

Apartment Art, the exhibition posits, goes beyond issues of materialization and de-materialization, institutionalization and anti-institutionalization, aesthetics and anti-aesthetics, and public and private audiences. Zhu, and others involved in the movement, instead focus on portraying their intimate understanding of and experiences with their familiar environments and the pleasure derived from accumulating, using, and organizing everyday items. Intimately interacting with the overlooked, forgotten or overused household items transforms them from objects of use into objects of interaction or purposeful display. A broom or dish towel or pile of rubbish relieve themselves of their practical usage, becoming “friends” that share the space and witness the artist’s life. On this dichotomy, the artist states: "This mixture is a dilemma but also a connection; it is a confrontation but at the same time a harmony. In fact, we can’t escape from this mixed feeling – it is like this shore and the other shore." 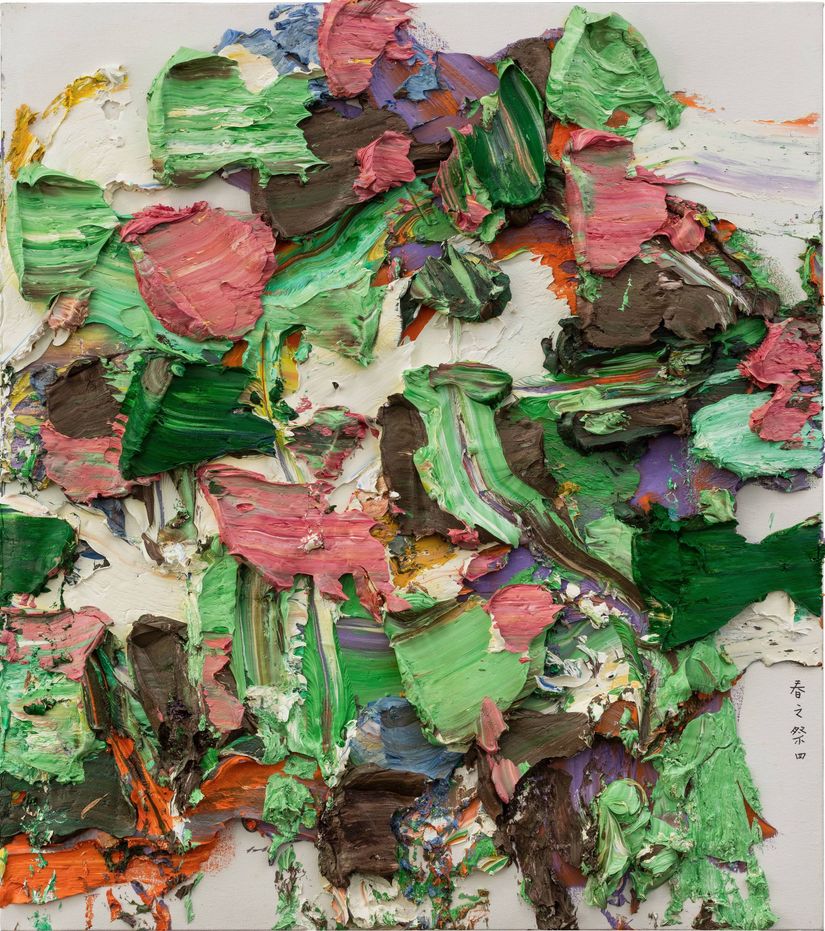 In the 1990s, the urbanization of capital and post-Cold War era political language forced some artists to retreat into a corner of society that was largely disregarded; Apartment Art flourished in these crevices, in these humble, laid-back spaces. While the media put into play are often trivial or commonplace, looking over their curated inclusion reminds viewers of the personal and historical relevance and the “minute” value they hold in today’s broad and affluent art world. It is precisely this incongruity, however, that underlines the value and unusual nature of spaces like Ganjiakou 303. Paradoxically, Pearl Lam suggests that these archival rooms are no longer static, that their intimacy and exclusivity can be translated into mobile and accessible spaces, replicated for the eyes of those who sidelined them in the first place.

An Interview With Pearl Lam of Pearl Lam Galleries

Exhibitions to Visit this June: Beijing

An Interview with Lu Jie of Long March Space