A small house of unfired clay subsides into a puddle of water. A collection of translucent vases turns out to be made of soap. Transience is very much a theme at the small but perfectly formed Contemporary Korean Ceramics exhibition, which will shortly finish its ten-month run at London’s Victoria and Albert Museum. The show offers, through the work of 15 Korean artists, a snapshot of contemporary practice in a country whose ceramic tradition dates back 10,000 years, and is well worth a visit before it closes on February 11.

‘Hwigyeong’ (2015), the collapsing house by artist-in-residence Kim Juree, is the star of the show and reveals her dismay at the disappearance of Seoul’s recent architectural heritage. This is a typical 1980s home in miniature, here lost to the elements rather than market forces; in her studio, on the same floor of the museum, Kim also displays fragments of houses that could have been recovered from an archaeological dig by the Borrowers. Shin Meekyung’s soap vases, which similarly risk dissolution on contact with water, share this concern for the fragility of domestic artefacts and their meanings over time. Comparisons are obvious with the work of British sculptor Rachel Whiteread, such as ‘House’ (1993), part of an east London terrace cast in concrete as the area was gentrified, and her more recent windows and doors in resin: Is there such a thing as object permanence? What is the relationship of object to memory? 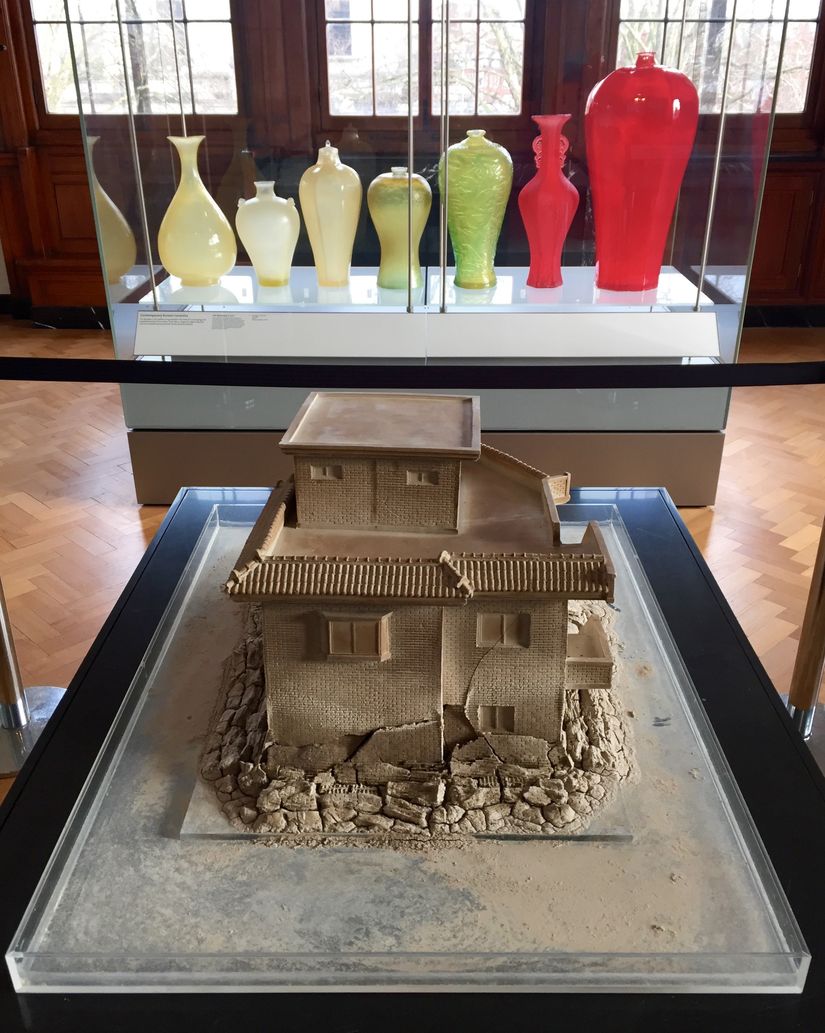 The vase is the most interrogated object throughout the exhibition, a base motif onto which new ideas are projected. Yoo Euijeong’s ‘Ego 1’ and ‘Luck’ (2010) are vases of conventional form and radical decoration, painted with gaudy colors and topped with finials shaped like Astro Boy and the @ symbol. While this wry fusion of old and new is familiar from the work of Taiwan’s Yang Mao-Lin and Tibet’s Gonkar Gyatso, the haloed Buddha-Batman of ‘Ego 1’ still raises a smile. Yun Jucheol’s vessels, meanwhile, look like nervous hedgehogs, a twenty-first century take on buncheong stoneware. Where traditional buncheong features a white slip over dark clay, resulting in a softly textured surface, Yun’s vases push at their own boundaries as though trying to escape themselves. 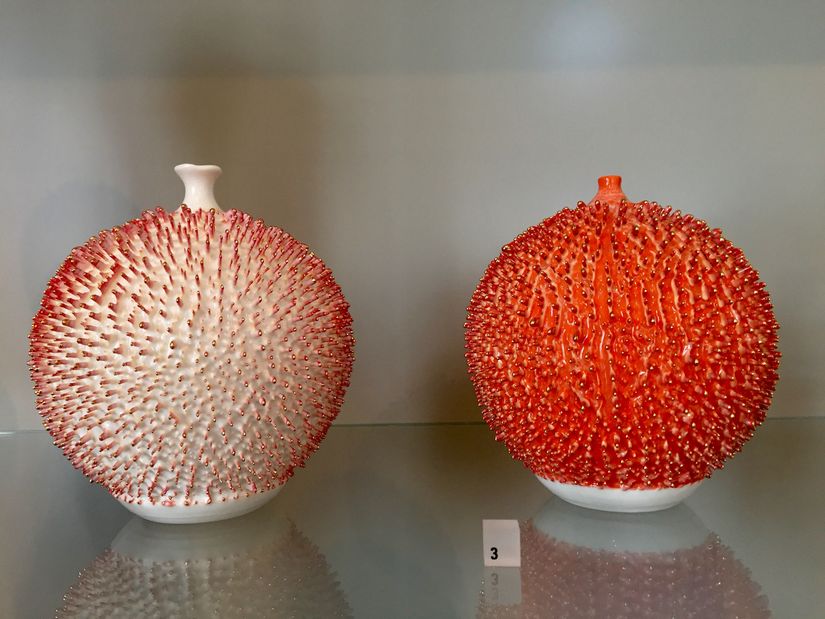 Buncheong first appeared in the Joseon Dynasty (1392-1910), the last Korean dynasty before Japanese occupation and rapid modernization. Two other artists draw on the ceramics of this period in their work: in his ‘Tao Series’ (2016), Lee Seunghee produces oversize tiles depicting Joseon-era vases, carved from multiple layers of slip, while Kang Ikjoong reinterprets the archetype of Korean porcelain, the moon jar. Kang’s huge, severed diptych shows a pair of painted moon jars – which are traditionally made by attaching two hemispherical pieces – as the yin and yang of one another, the northern and southern Koreas, perhaps. As these ceramic icons are simultaneously magnified and flattened, viewers are forced to consider the values of the past in Korean society today. 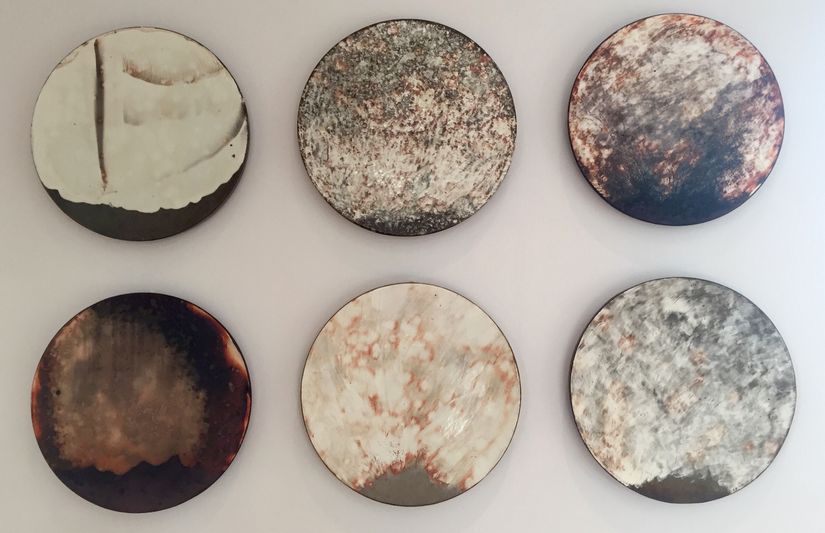 Where the European artistic tradition has for many years emphasized working from life, the Asian tradition has cultivated a way of seeing that goes beyond the eye.

The vase makes its final appearance in the work of Ju Sekyun, who pencil-sketches from memory the designs of Korean “National Treasures” onto plain white porcelain. The effect is unheimlich, inducing side-steps and squints. Lee Kanghyo is another artist who works from memory, reproducing the essence of seasonal landscapes on buncheong in his studio. A contrast is highlighted here between the European and Asian artistic traditions: where the former has for many years emphasized working from life, the latter has cultivated a way of seeing that goes beyond the eye. However, Lee breaks with tradition by presenting ‘Buncheong Landscape Series’ (2016) on two-dimensional discs, rather than three-dimensional pots.

Both Yu Sangduk and Park Sohyoung challenge the dichotomy of two- versus three-dimensional forms, producing work that is ostensibly flat but feels otherwise. Yu’s glazed, dimpled tiles recall Josef Albers’ many homages to the square, pulsing as they catch and throw back light, mimicking the effect of the Bauhaus master’s advancing and receding planes. Park’s cityscape panels are much less robust, paper-cut snowflakes with tiny towers apparently ready to shiver in the breeze – highlighting once again the precariousness of the urban environment under capitalism. 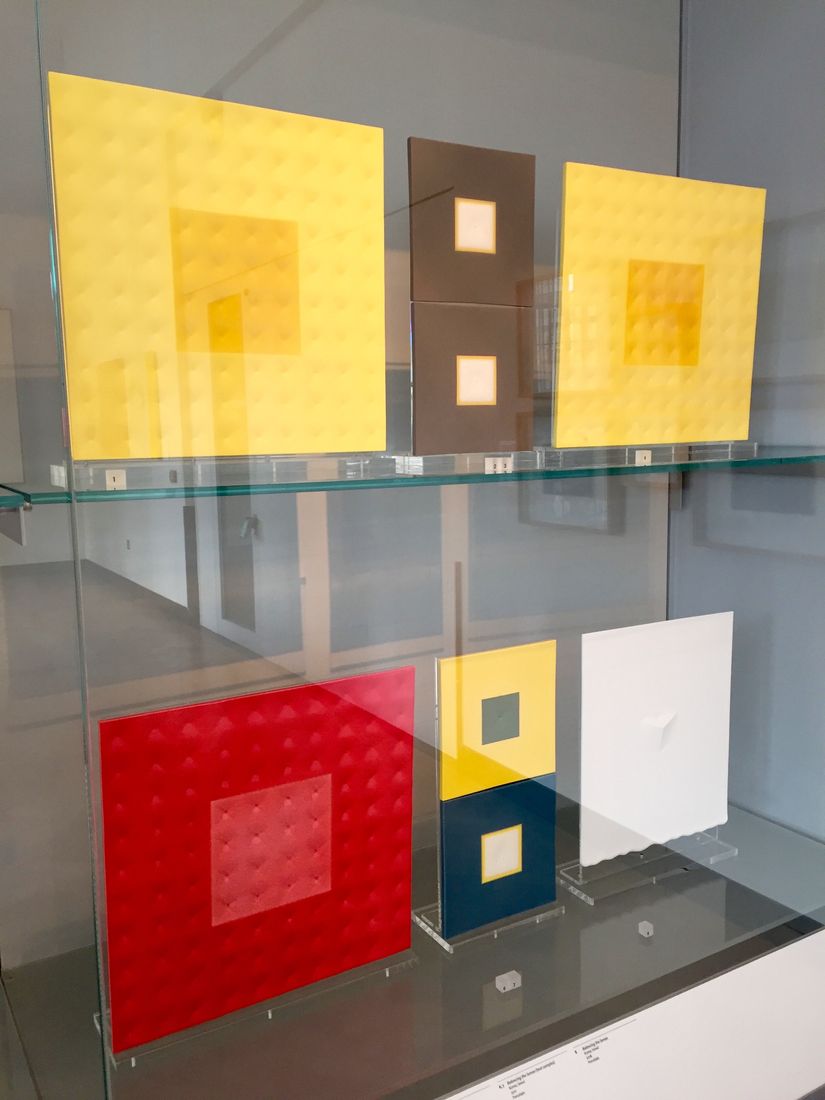 The remaining four artists are resolutely sculptural. Yoon Soi’s sliced and reconfigured spheres are a latter-day embodiment of Giacomo Balla’s futurist paintings; 100 years apart, both celebrate the beauty of motion and change. Ahn Seongman, too, embraces technological innovation in his 3D printouts of onggi tableware. Since onggi containers have long been used for the fermentation of kimchi and doenjang Ahn seems to ask, like Shin with her soap vases: What happens when tradition breaks down? What is a replica, and what is a new form? Equally, Seo Daekyun’s ‘Nature Series’ (2010-17) comprises mythical beings assembled of tiny molded pieces, biological and mechanical, that we are asked to process with no frame of reference, while Cho Shinhyun’s slip-layer sculptures suggest the cartographical contours of a challenging mountain range. 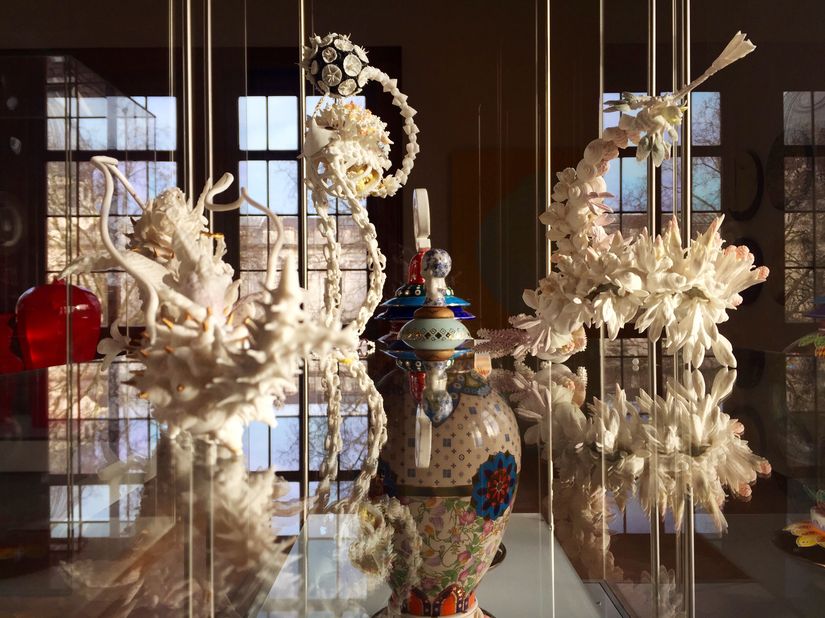 A walk downstairs to the main Korea gallery helps to place the contemporary pieces in their historical context.

The work of these 15 artists is shown in room 146 of the V&A, at the far end of the sixth floor materials galleries, which offer wonderful contemporary context. But a walk downstairs to the main Korea gallery, room 47G, also helps to place the pieces in their historical context. As well as the permanent collection, vases by Cho Chung-Hyun and Ro Hae-Sin (1987 and 2006 respectively) are on display here, linking historical practice with the work exhibited in Contemporary Korean Ceramics. Cho’s pair of minimalist vases reference onggi but feature modern blue inlay designs; Ro’s five spherical vessels have an unprecedented style and appear as works of abstract art, though they remain functional. 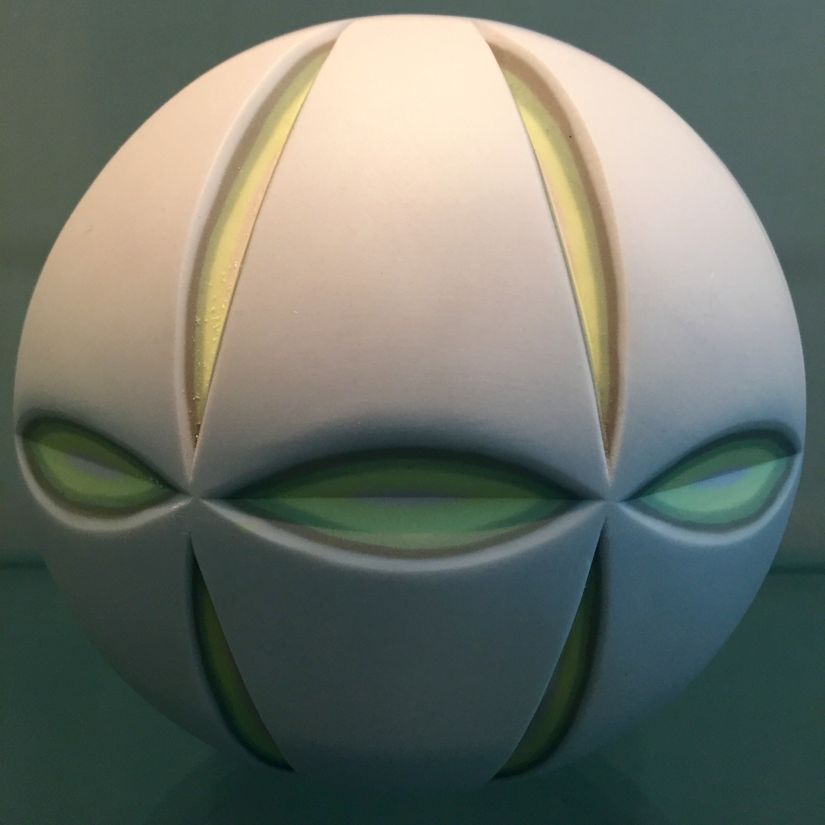 There are said to be three distinct trends within contemporary Korean ceramics: the maintenance of tradition (e.g. the kettles and tea cups of “Great Master” Shin Hyun-Choul); the rejection of tradition (e.g. the mixed media cubes of Kim Dae-Hoon); and the reinterpretation of tradition through novel means, exemplified by the work currently on display at the V&A. Though arguably only telling one third of a story, this well-curated show is thematically tight and full of lightbulb moments – catch it while you still can.

Contemporary Korean Ceramics continues until 11 February 2018. Find out more about the exhibition here.

Getting there: The V&A is a short walk from South Kensington station on the London Underground (District, Circle or Piccadilly lines). Buses 14, 74, 414 and C1 also stop near the museum.

Exhibitions to Visit this January: Singapore...