It is no secret that Singaporeans are passionate about food and as of mid-May, Mirazur, the world's Number 1 restaurant, is heading to our sunny shores with a three-month residency at Mandala Club. As a part of this exclusive experience, The Artling has worked with the Mandala Club and This Humid House team to create an immersive art journey, featuring vibrant contemporary artworks from various Singaporean-based artists and galleries. Guests will not only be able to feast on the artfully-designed dishes on their plates, but also on the curated pieces surrounding them as they dine.

As a long-standing partner of Straits Clan (now known as the Mandala Club), The Artling was brought on board to manage the art programme throughout the various spaces for the 3-month Mirazur residency. The selected artworks will form part of the narrative of the menu, which will change seasonally, and the transformed space will transport guests into another universe. The collection features some of the most prominent and exciting names in the Singapore art scene, including photography lightboxes by Robert Zhao, charcoal drawings by Jimmy Ong, a sculptural piece from Grace Tan and a video installation by Yanyun Chen and Alex Scollay. Other spaces also feature a mixed-media work by Filippo Sciascia, as well as a moonscape-like acrylic and screenprint piece by Genevieve Chua.

Dr. Yanyun Chen (b. 1986, Singapore) is a visual artist, and runs a drawing, new media and installation practice. Her works delve into the aesthetic, cultural and technological inheritances on one’s body, unravelling fictional and philosophical notions of embodiment, and are grounded in the physicality of human and botanical forms . She researches cultural wounds, dowry traditions, hereditary scars, philosophies of nudities, and etymology, and investigates stories as a skin which we wear.

Chen graduated from the European Graduate School Philosophy, Art, and Critical Thought PhD programme (2018), its Communications MA programme (2014), and Nanyang Technological University School of Art Design and Media Digital Animation programme (2009). She is the Arts Practice Coordinator for the Humanities division of Yale-NUS College in Singapore, the founder of illustration and animation studio Piplatchka, and a partner of publishing house Delere Press LLP. Outside of Singapore, her works have been exhibited internationally, including Buenos Aires, South Korea, Canada, USA, Belarus, The Netherlands and Czech Republic.

She lives and works in Singapore. 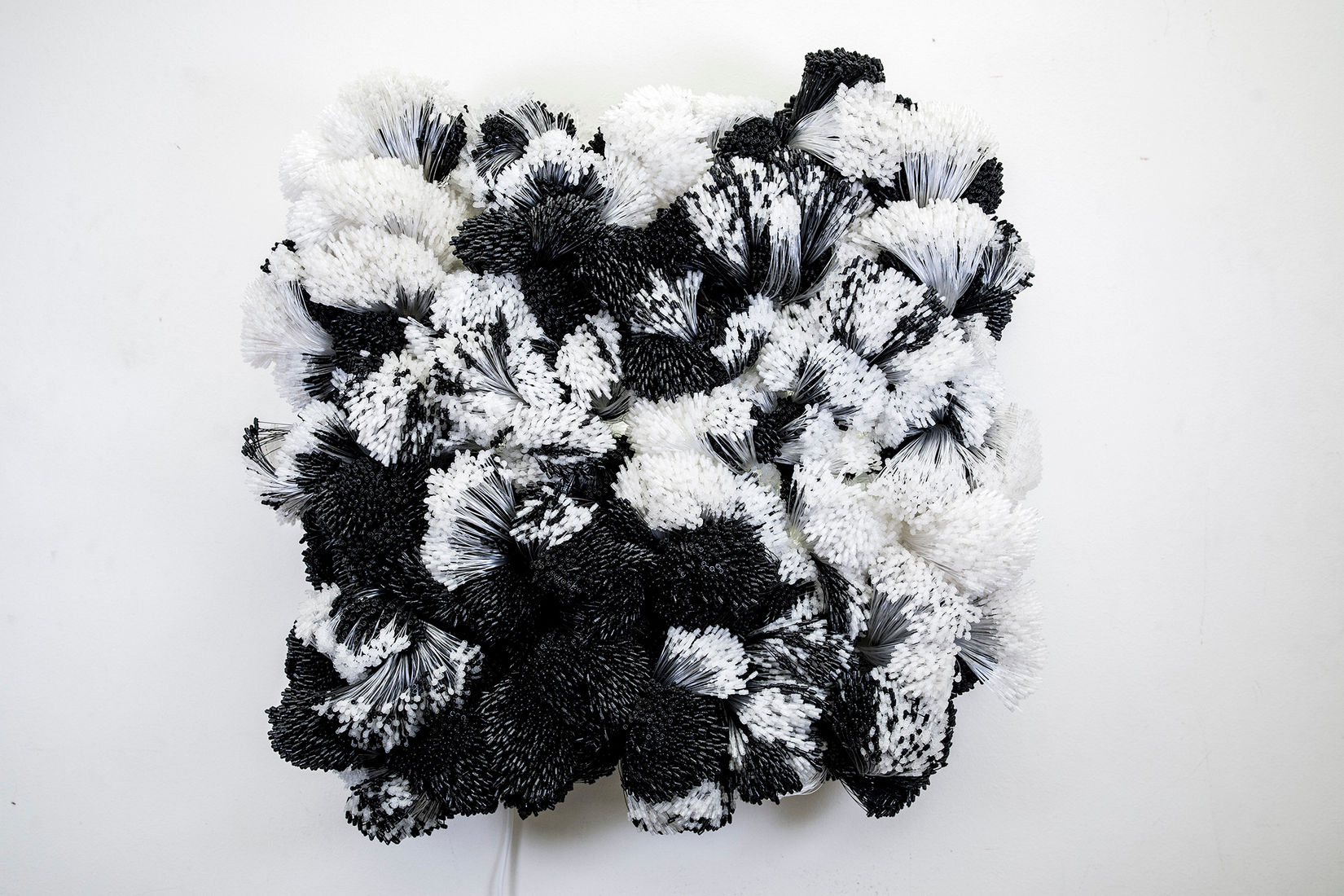 n. 337 - arrangement in monochrome - Grace Tan (Available on The Artling)

Grace Tan began her practice in 2003 under the kwodrent series. Influenced by geometry, her works are distinguished by an intrinsic tactile nuance that heightens the matter and form. Tan’s new body of works presents various systems of arrangement, exploring the intrinsic relationship between the displayed objects and the display structures.

Tan has been commissioned by the Singapore Art Museum, The Esplanade and the Land Transport Authority of Singapore. She has also represented Singapore at Singapore Biennale 2013, Fukutake House/Setouchi Triennale 2013 (in collaboration with The Substation), Aichi World Expo 2005, Venice Architecture Biennale 2008, London Design Week 2006 and State of Design Melbourne 2008-2010. In 2012, Tan was awarded the distinguished President’s Design Award for Building as a Body and in 2013, she was conferred the Young Artist Award and nominated for the President’s Young Talents Award.

Tan lives and works in Singapore.

Image Courtesy of FOST Gallery and the Artist

Jimmy Ong graduated from the Pennsylvania Academy of Fine Arts in Philadelphia, USA in 1992, and is regarded as one of the pre-eminent artists of his generation.

Since the 1980s, Ong has been recognised for his monumental figurative charcoal works on paper. His drawings often focus on traditional Confucian philosophical themes like filial piety, ancestral worship, his own complex familial relationships and struggles with accepted gender identities and roles. In recent years, he has started to explore historical political figures and events, focusing on the colonial history in Southeast Asia.

He has exhibited extensively locally and internationally. His artworks are in the permanent collections of the National University Of Singapore Museum and the National Gallery Singapore, Deutsche Bank AG, amongst other private and corporate collections.

Ong currently works between Yogyakarta and Singapore. He is represented by FOST Gallery in Singapore. 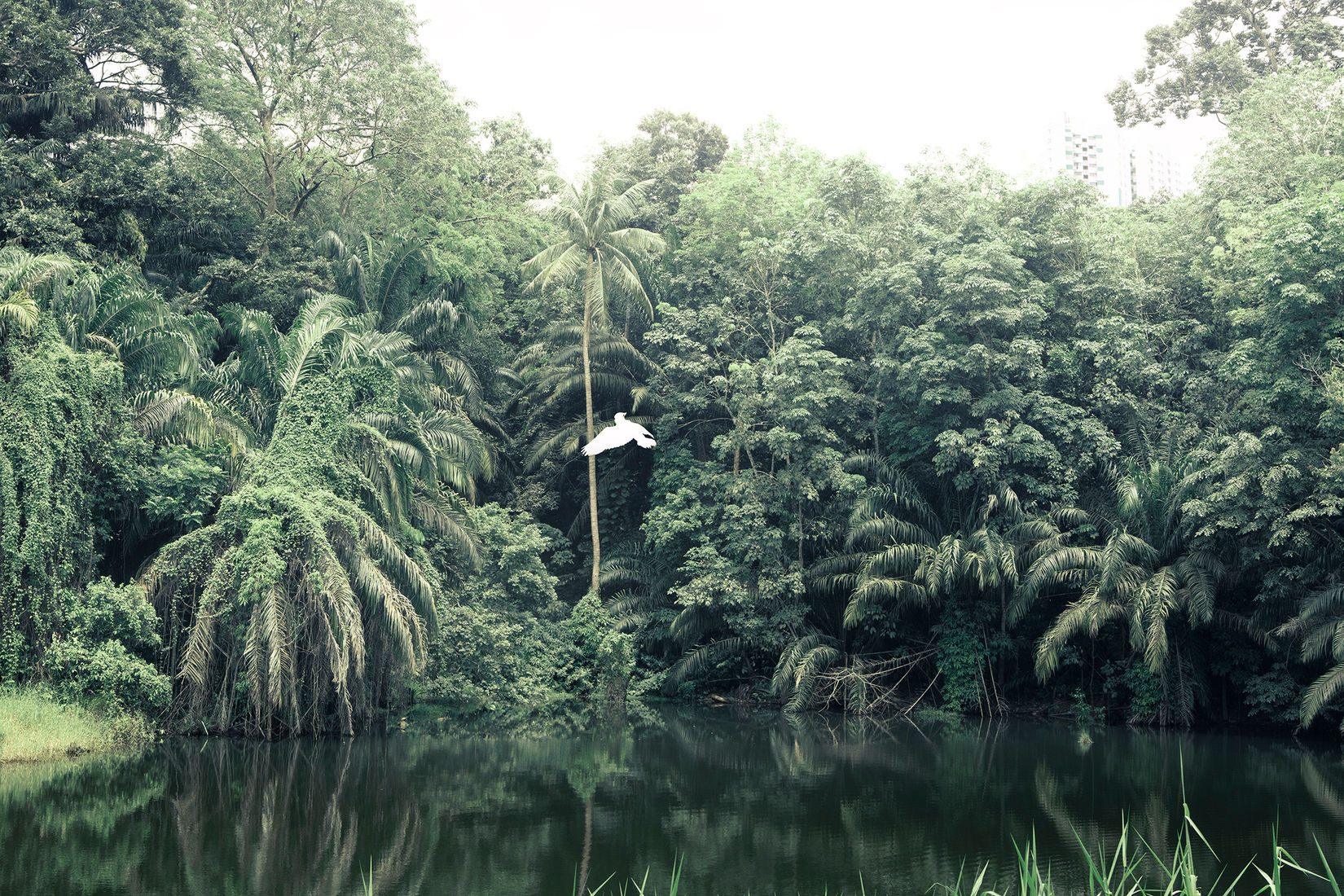 Singaporean visual artist Robert Zhao Renhui works mainly with photography but often adopts a multidisciplinary approach by presenting images together with documents and objects. Renhui’s work include textual and media analysis, video and photography projects. His work addresses man’s relationship with nature, and related issues of morality and ethics, paying close attention to how our attitudes and opinions shape our assumptions about the natural world.

His work has also been awarded The Deutsche Bank Award in Photography (2011) by the University of the Arts London, The United Overseas Bank Painting of the Year Award (2009) Singapore; honorable mentions in Photo Levallois (France, 2008). In 2010, he was awarded The Young Artist Award by the Singapore National Arts Council. His work has also been featured prominently in Artforum International, ArtInfo, Fotografia and Punctum.

Renhui received his Bachelor’s and Master’s degrees in Photography from Camberwell College of Arts and the London College of Communication respectively. His work addresses man’s relationship with nature, and related issues of morality and ethics, paying close attention to how our attitudes and opinions shape our assumptions about the natural world. He has also undertaken research residencies in Fukuoka Asian Art Museum, Bangkok University Gallery, National Museum of Wales, Earth Observatory of Singapore, Ffotogallery, The Arctic Circle Residency and the Kadist Art Foundation (San Francisco).

His works are held in the collection of The Singapore Art Museum, UBS, Statoil Art Collection, United Overseas Bank and The Kadist Art Foundation. 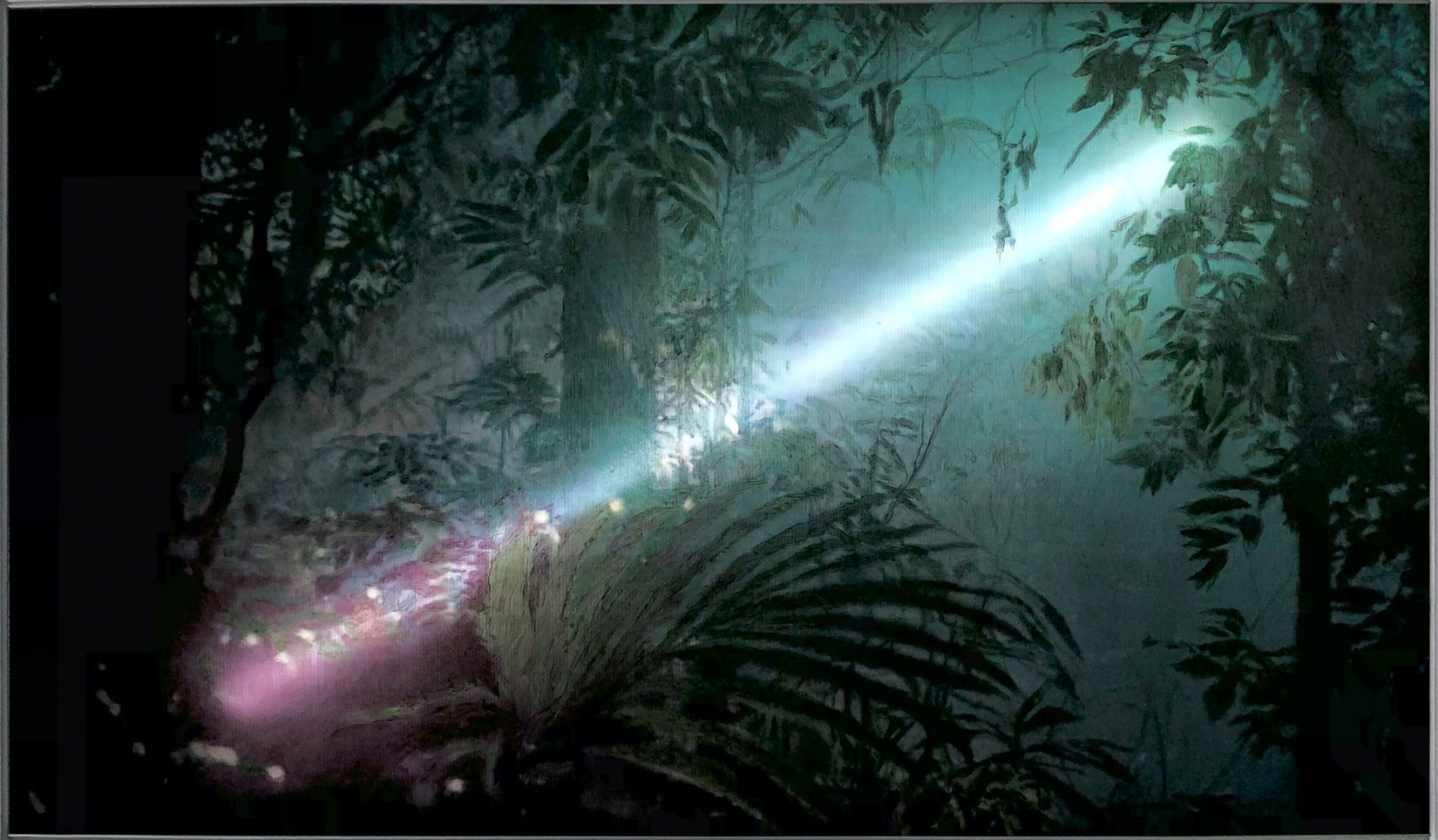 Filippo Sciascia (b. 1972, Italy) is an Italian artist based in Bali, Indonesia. He studied art at the Institute of Art, Nordio, Trieste and Fine Arts Academy, Florence, in Italy. His most recent exhibition with Yeo Workshop was 'All We Have' in 2021.

Over many years, Sciascia has explored the pictorial tensions between painting and imaging technology of the new era, challenging the art of painting as a practice. Choosing photographic imagery to re-depict on canvas, Sciascia captures the transitional process from one medium to another in an amalgamation of pixels, lines and forms.

The emphasis on the process in his work rather than on the object demands a profound understanding of the character and history of each media. Sciascia demonstrates this knowledge through his consistent and loyal struggle with the challenges of representation and reality. 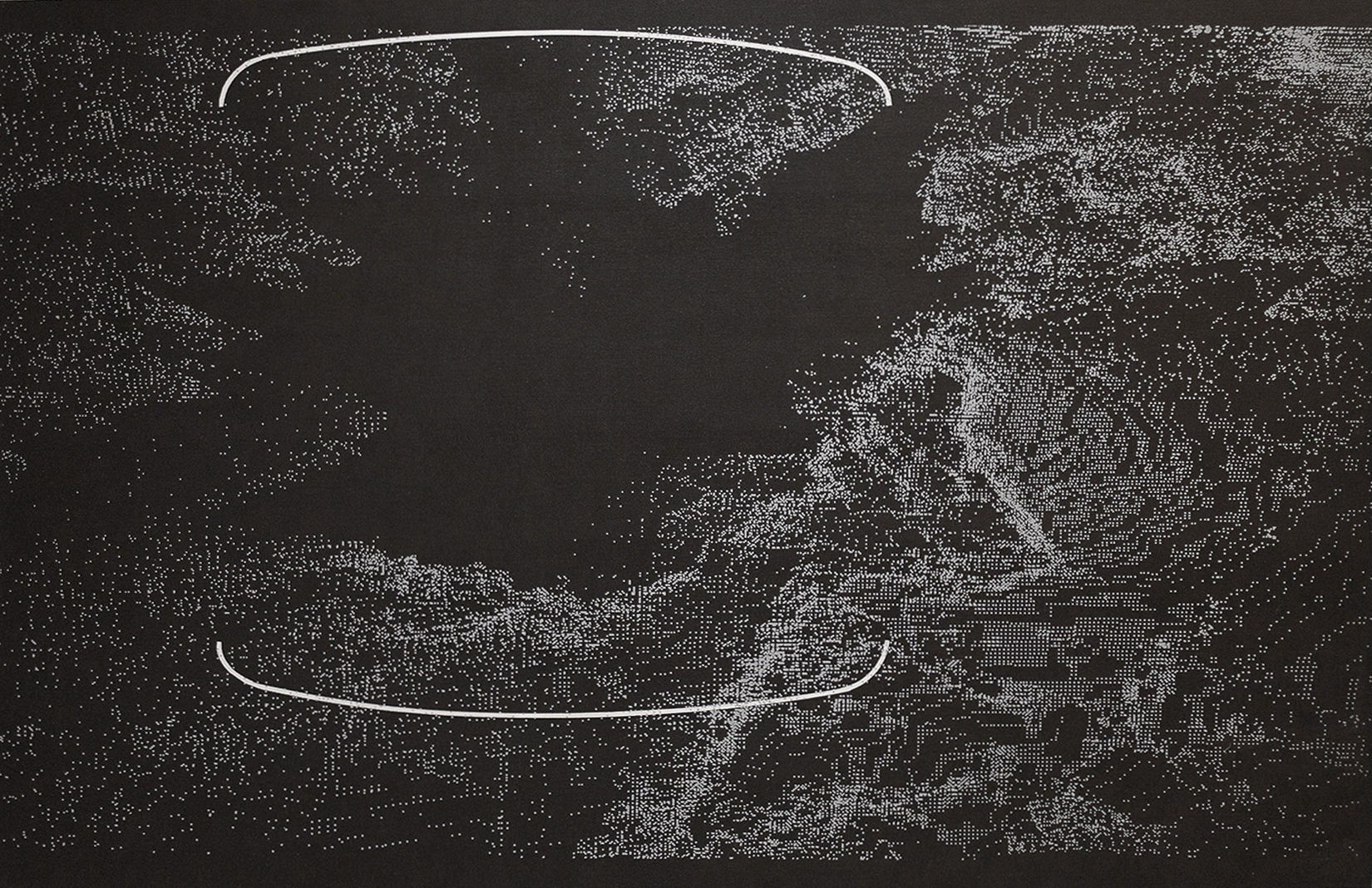 Born in 1984 in Singapore, Genevieve Chua received a Diploma in Painting from LASALLE College of the Arts (2004) and a MA in Painting at the Royal College of Art, London (2018). Chua is a painter who works primarily through abstraction in a way that unfurls and reveals the painter’s process through diagram, palimpsest, syntax, and the glitch. While notions of nature and wilderness persist across several works, the form taken by her exhibitions – image, text or object – is disrupted through painting. She was conferred the Young Artist Award (2012) by the National Arts Council, Singapore and has participated in solo and group exhibitions throughout Asia and the US. She lives and works in Singapore.

Nestled in between lush greenery and close to the Italian border, star chef Mauro Colagreco has over the years build up the three-Michelin-starred Mirazur that quickly rose to fame as the world's No. 1 restaurant. During their 3 month residency at Mandala club (for which a 15 person team has been flown in from France) Colagreco will be following the theme of ‘leaves’, before transitioning to ‘flowers’, ‘roots’, and ‘fruits’ for a six course lunch ($388) as well as nine-course dinner ($488). In his restaurant Mirazur in Menton, as well as during his 3-month residency in Singapore, Mauro Colagreco has vowed to create a deeper message of sustainability with his dishes returning to a more balanced equilibrium with nature.

To accompany the newly-created menu, the space surrounding guests has been transformed completely as well. Immersing them into a forest of lush greenery, with lightbox art installations from Singapore photographer Robert Zhao Renhui as well as Bali-based Filippo Sciascia in the main dining room.

The former cafe space will most probably be unrecognizable for many as the space has been transformed into a moon landscape featuring a fuzzy sofa, succulents and a video installation by Yanyun Chen and Alex Scollay, and an acrylic and screenprint work by Genevieve Chua.

The Artling and Straits Clan Launch The Creative Studio