New In: Artworks from Promising Artists

This week, The Artling has put together some of our new artworks that can add warmth and liveliness to your home! From cyanotype prints to unique minimalist paintings, these talented artists showcase a variety of their work, tackling personal expression through nature, femininity, and more.

Check out these 10 of our most recently-listed artworks from promising artists to add to your collection! 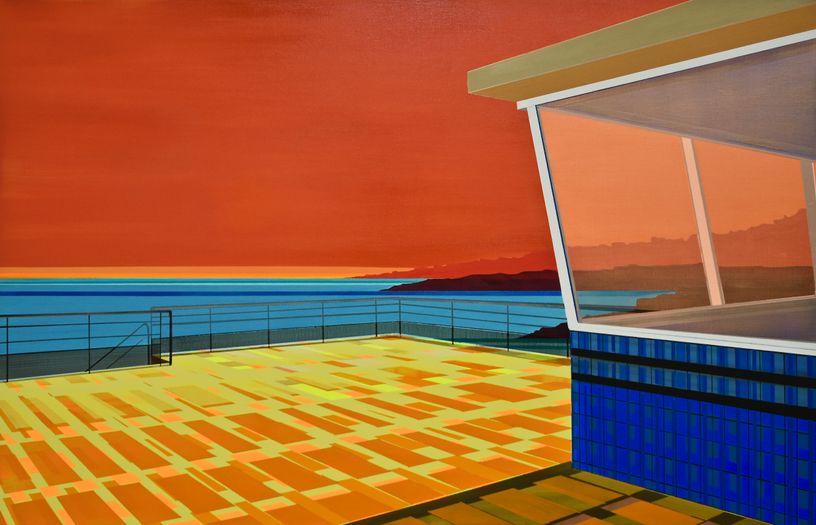 "The Harbor Master's Office" by Cécile van Hanja is an acrylic and oil painting on canvas. Born in Corsica (1964) and currently living in The Netherlands, Cécile is inspired by architectural landscapes and complementary colors.

"The building Port Tonic at the Côte d'Azur has the same straight lines and open spaces as the constructions of modernist architects like Mies van der Rohe and Le Corbusier and gave me the inspiration to make this painting. The perspective plays an essential role, the straight constructing lines of the building lead to invisible vanishing points. Together with thin layers of transparent acrylic and oil paint it creates a colorful pattern that is reminiscent of the colors of Matisse." 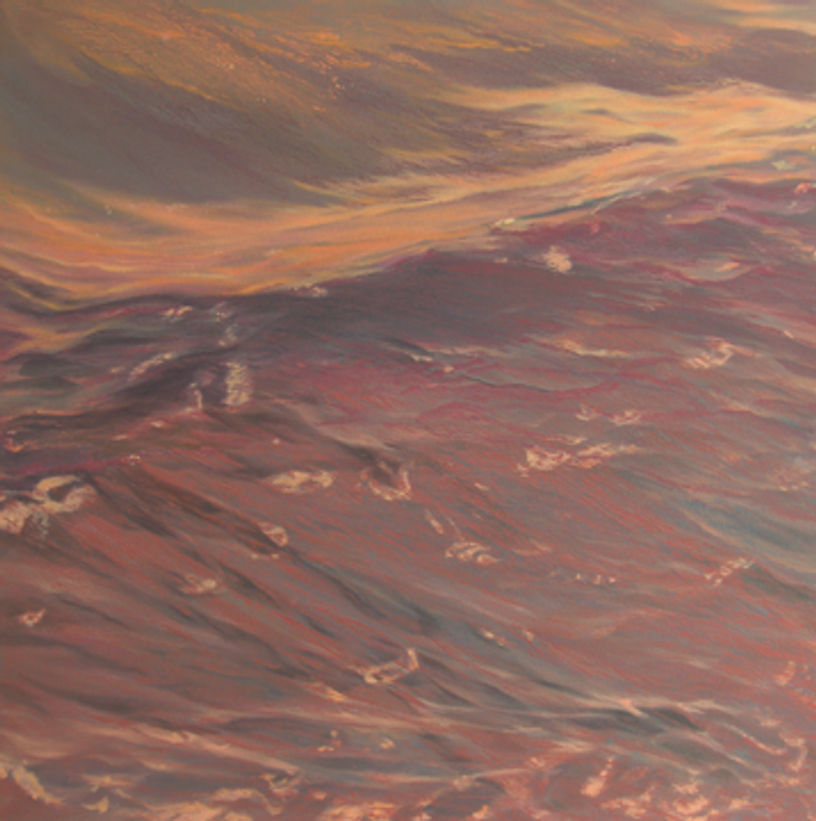 "Bliss" is a painting by Bangkok artist Atjima Jaroenchit Tananont created in 2005. Atjima have been painting under the themes of “Ocean or Water” for more than 20 years. Her individual technique is very unique, she has both a profound understanding of the character of the ocean and the expert skills to melt and move those colors in her desired directions.

"When I paints, I do not use brushes - I pour the colors that mixes with oil into the paint colors and then lets the mixtures slide as I lifts the canvas. The ocean is the great inspiration from nature. Let's feel the movement of waves and slide of stream in many rhythms from your heart."

Untitled No. 452 by Jeremy Prim 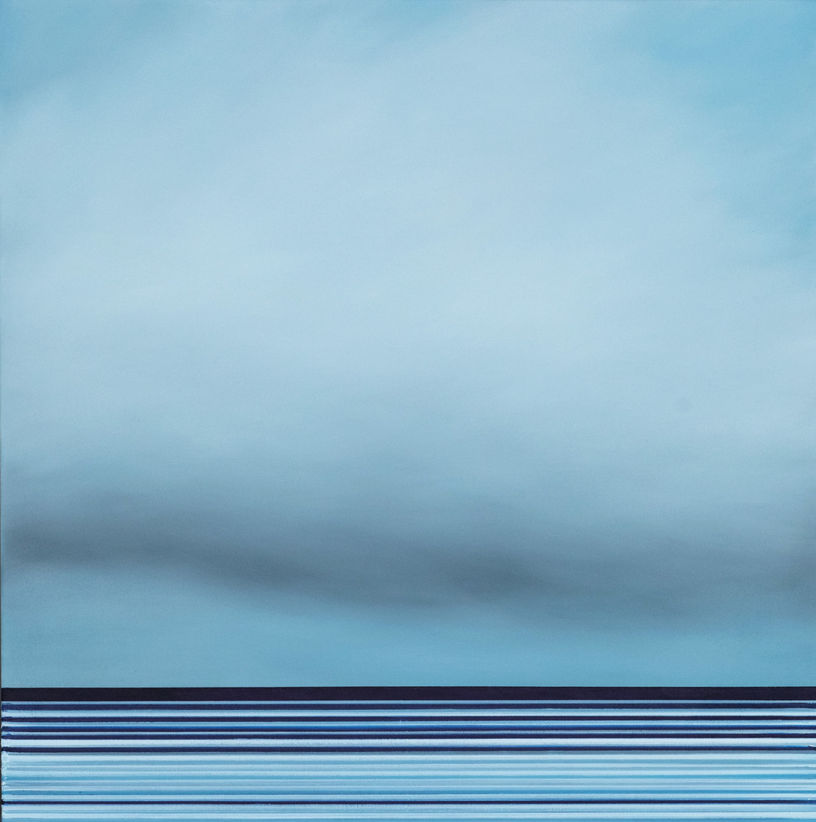 "Untitled No. 452" is an original minimalist seascape painting by American artist Jeremy Prim.  Created using high-quality oil paint on gallery-wrapped, hand-stretched and gessoed cotton canvas. The sides of the painting are finished as a continuation of the front. Installed in a white wood floating frame, wired and ready to hang.

"The impetus of my work derives from the beauty of the ocean and the peaceful solitude one feels in its presence. Emotive, rather than being purely representational, my paintings are inspired by the coastline, with the multiple horizon lines referencing the continuous rhythm of the sea." 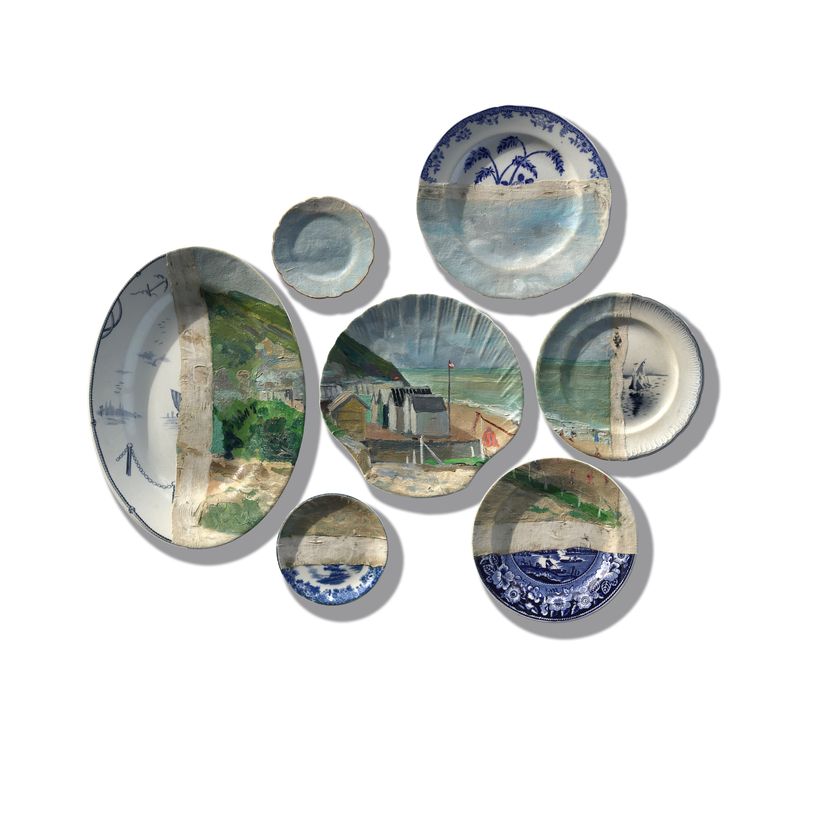 "Belle Île" belongs to Amsterdam based Studio DeSimone Wayland's Altered Perspectives series of one-of-a-kind wall art. This artwork consists of 7 plates combined with a painting of a beach on Belle Île in Bretagne.

"Altered Perspectives is an on-going art project we began over eight years ago, combining two different mediums to create something new, in this case paintings with ceramics. For instance, a painting of boats is combined with plates containing marine dècors, and the process as it were 'alters their perspective', hence the title of the series. By breaking the painted image into several parts, the subject is removed from its framed confines, extended, and given a new life as a new art piece."

Since their inception, the Altered Perspectives have been commissioned by Anthropologie and Terrain (2010-13), MaxMara (2014-15), Achmea (2016), The Walt Disney Company (2017), and have been published in several international interior-design magazines.

Please note that each set of Altered Perspectives artwork is one-of-a-kind. 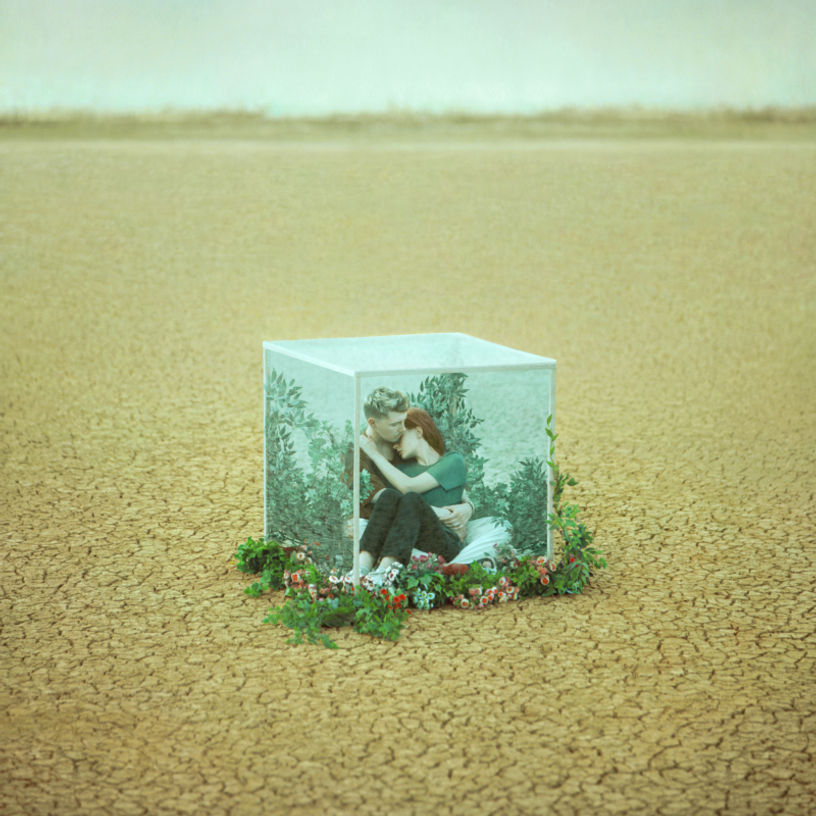 "Quarantine" is an artwork by talented Ukrainian photographer Oleg Oprisco. He creates stunning surreal images of people in a different dream-like setting and shoots using old-school photography - each of his photos is a scene from real life. 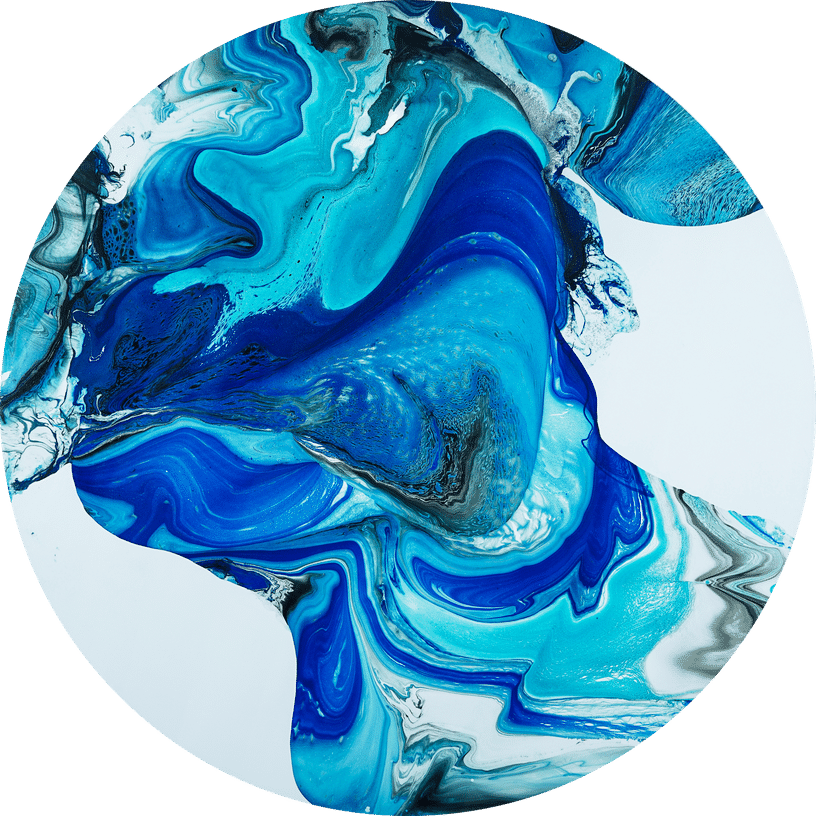 "Transformation" by Fintan Whelan is a polymer coating, silk, and oil on canvas. The canvas is stretched on a wooden frame and artwork is ready to hang. Framing is not required. This artwork was created using fine Kremer pigments and hand-stretched canvas (of 380 g quality). A thin layer of varnish protects the artwork against UV light and dust.

"My way of working has become more meticulous through constantly adding or applying new materials like silk fibres or testing new techniques to push my process to its limits. This continuous experimentation is a key element to my new works. My objective is to develop my work to a new level, to strive for a new vision and an echo of life as I experience it."

This is an exclusive handprinted limited edition of a cyanotype by the studio Kind of Cyan. This beautiful triptych is called "Fresh California Pool patterns", which shows the semi-abstract movements of light reflecting in a California swimming pool. The cyanotype (a.k.a. sun-print) process is one of the oldest in the history of photography, dating back to the 1840's. Cyanotypes were then made famous by Anna Atkins, considered the first female photographer!

"Inspired by nature, we feel the need to look back at a craft that is handmade, analogue, and using an all-natural light source: the sun. Our cyanotypes are made by coating high-quality Italian watercolor paper with a light-sensitive emulsion. We then expose it in direct sunlight for several minutes using a photo negative to get the best image quality. Finally, the print is washed and fixed with water to stop the reaction and prevent fading.

What you get is an amazing, royal blue image... with absolutely no ink involved! And since each print is handmade, tones will give gorgeous, subtle variations. The beauty of cyanotypes is that each print is absolutely unique. 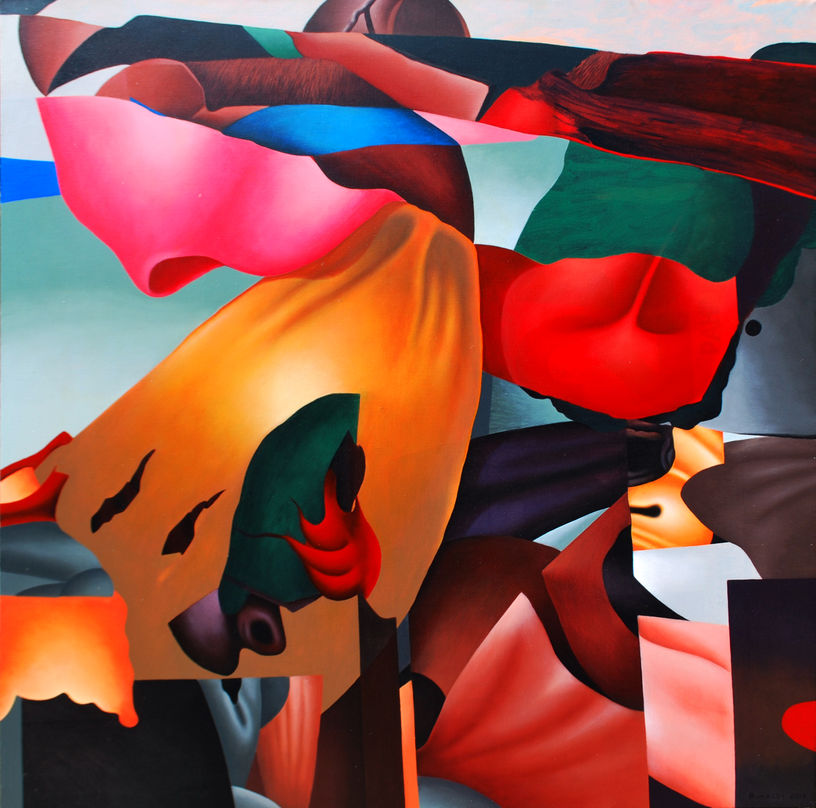 This work by Indonesian artist Rinaldi was inspired by the shape of the coconut as a visual object in this work.

"the object's spherical shape is no longer depicted in all directions; it has undergone a change of shape into overlapping pieces to find new object shapes that resemble other shapes. The color gradation forms the space and distance between objects to create a series of harmony in the arrangement. I use a semi-realistic painting technique, a blend of fine and rough strokes to create artistic visuals." 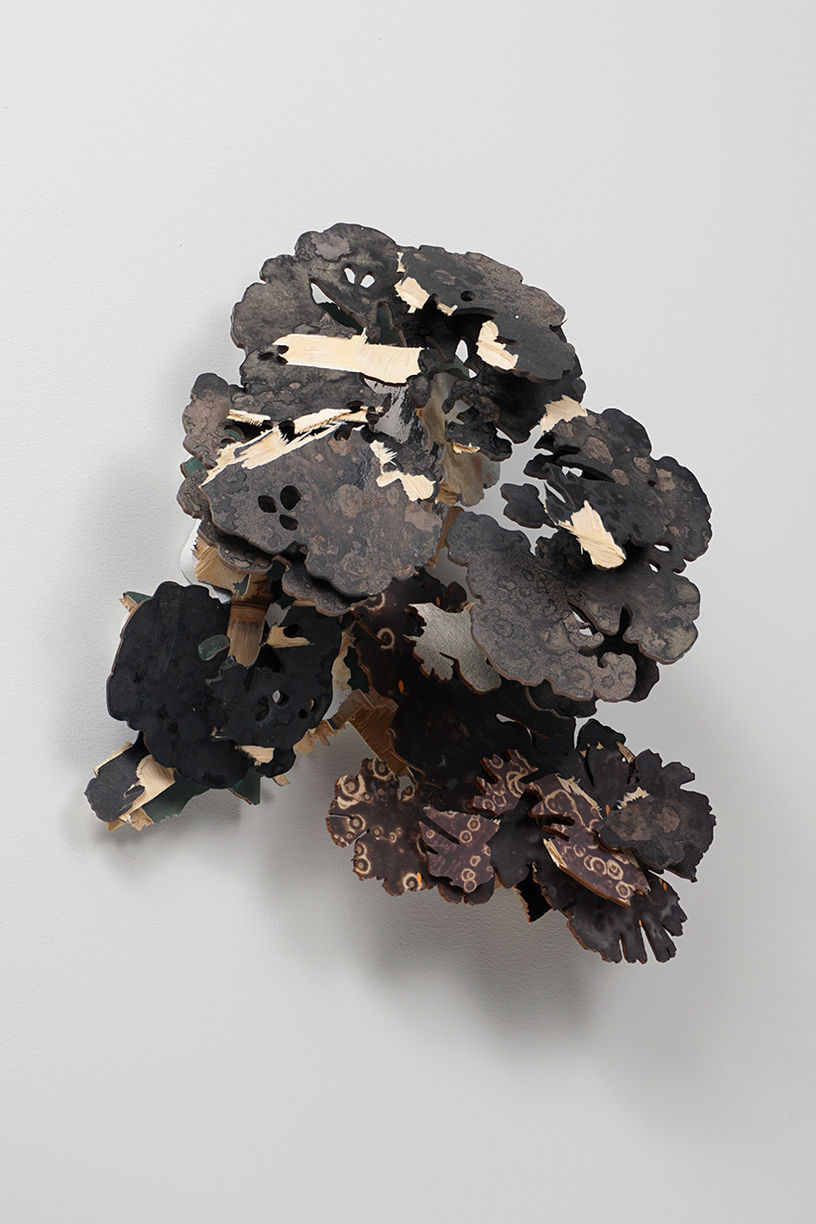 "Floral Abstraction XVII" by Joris Kuipers is an installation/wall relief made with wood.

"You are about to enter a different dimension. One where the chaotic, random events of life have been captured and carefully rearranged to create an animated, lyrical object of beauty. Hand-drawn, laser-cut slices of imagination are assembled into jubilant abstract visions that effortlessly expand into the surrounding space. Constellations reminiscent of billowing clouds, minerals and flowers in bloom testify to the vitality of nature and our own capacity for joy." 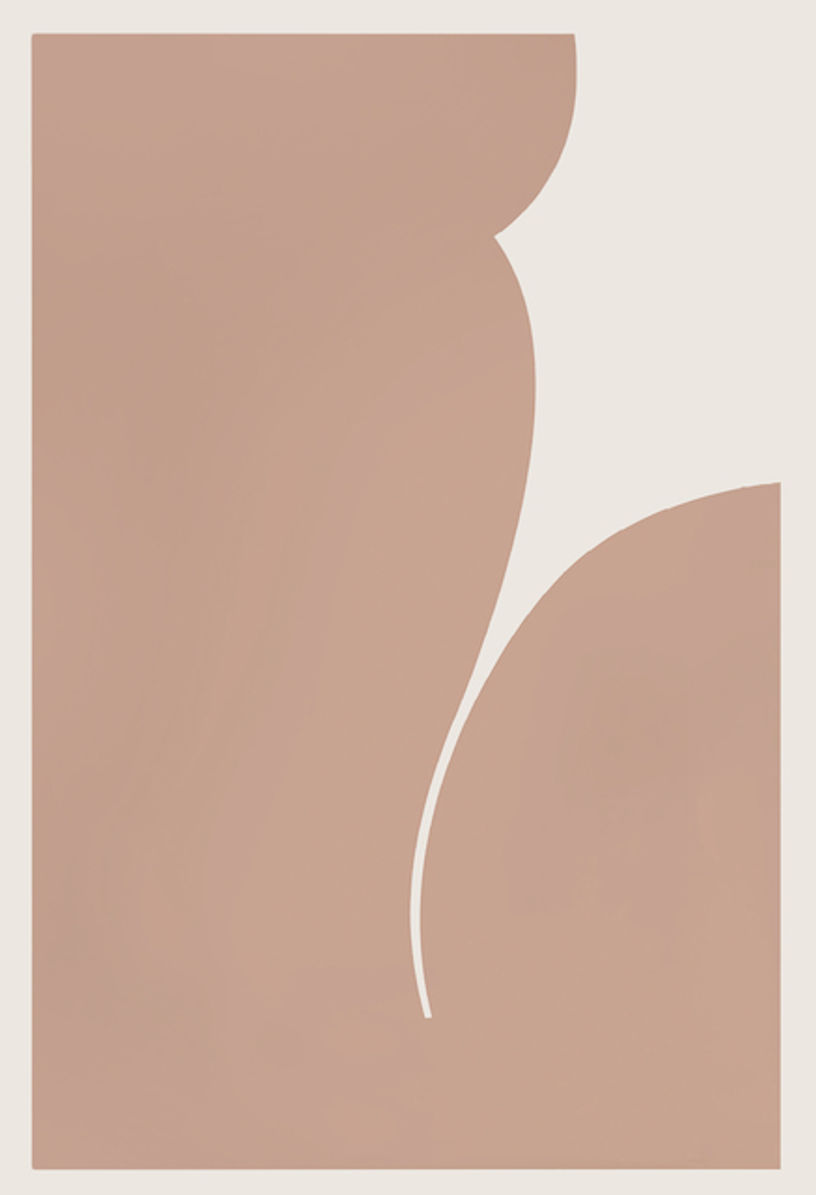 "Body Language IV (Soft Clay)" is an artwork by Caroline Walls. All her silkscreen prints are handmade fine art objects printed on beautiful Dutch paper with deckled edges. They are not digital reproductions, but rather, each print is made by hand with one ink colour at a time, they are then signed and numbered by the artist. Given the handmade nature of the screen printing process slight nuances between each print edition can be expected, ensuring it is a truly original piece of artwork.

"I draw inspiration from the movement and fluidity of the female form moments of intimacy, contemporary perceptions of women’s sexuality in the current cultural sphere as well as notions of gender fertility and motherhood.
I am keenly interested in the construction and complexity of the female identity and the distinction between the private and the public self which are key themes of my work that produces my artistic practice is grounded in a sensitive use of colour and a deep understanding of composition and form."

If you are curious to find out more about our most recent artworks, you can check them out here. If you need additional assistance or have a specific requirement, you can chat with our expert art curators here.

Challenging the Canon: How Artists have Raised LGBTQ+ Awareness Through Art...

New In Design: Featuring 10 of Our Latest Pieces