Everyone knows what a portrait is, where all you need is a face, a chosen perspective, and a painter's eye. But what makes portraiture art so sought-after, standing the test of time, and where many artists have at least created one portrait to showcase to the world?

For some, it is the unique touch of the artist that affects the way a portrait is created, and which stays in the viewer’s memory forever. Others may simply admire the ease with which portraiture art can be appreciated; after all, these portray the same features one would see on a friend or family that have instead been rendered to perfection in the artist’s imagination!

Portraiture art always seems to be on the rise for these reasons, among others, as we'll come to explore in this article. If you're an art collector looking to own a portrait, keep reading, as The Artling’s guide will help explain how to look at, choose and buy portraiture art!

What is portraiture art?

Portraiture art can be characterized as any artwork that aims to represent a person artistically, no matter the medium, such as through a painting, a photograph or a sculpure. Whether it is through depicting a particular expression on a person's face, or creating a certain mood around the subject, portraiture art first and foremost comprises a subject's face and neck, though often this region is extended to the upper torso depending on the artist's discretion.

There are several forms of portraiture art, namely, a portrait, a group portrait, or a self-portrait. While self-portraits are artworks created of the artist by the artist themselves, a regular portrait, be it an individual or group artwork, requires a model to pose for the artist or visual references such as photographs.

A brief introduction to portraiture art

Portraiture art, being one of the oldest forms of art, has long been the primary method of recreating the appearance of a person during a specific period of time. It was widely popular in ancient times, said to date back to Egypt thousands of years ago, and many artists quickly found patrons in the upper class who would then commision them to create portraits of the royal family starting from the mid-fifteenth century.

The aim of portraiture art in these instances was to memorialize the beauty and virtue of the sitter, as well as their social standing by showcasing their wealth and power. This was typically portrayed through wearing royal costumes and gathering in regal spaces such as the king's room. In this sense, portraiture art was, and is still important as a social practice. More importantly, portraiture art was created to flatter the subject, not necessarily to represent him or her in their true likeness.

Why is portraiture art important?

Portraiture art is important as a way to record key moments in history, such as the power of the monarchy. Once seen as a luxury, as it was only available to royalty, portraiture art became more accessible in the mid-nineteenth century when photography was invented and became part of the mainstream.

Image courtesy of the Victoria and Albert Museum

Portraiture art thus became a means of self-expression, as seen in the soft-focus works of Julia Margaret Cameron that embodied the whimsical spirit of the Victorian era. Later, in the twentieth century, artists such as surrealist photographer Claude Cahun explored the various gender and sexual identities within themselves through self-portraits.

While portraiture art and figurative art share many visual similarities, both art genres differ insofar as figurative art typically sees a greater degree of divergence from recognizable human features, such as through the overexaggeration of these features or by removing them altogether. Additionally, portraiture art tends to place a focus on an individual, specific person, while figurative art takes as its subject the various facets of humanhood; it is concerned with theme as opposed to correctness of form.

How to spot an excellent piece of portraiture art

Now that you've decided to delve into the world of portraiture art, it is key to learn how to spot an artwork that is of quality. For portraiture art, it is highly recommended that collectors focus on the artist's use of colour, perspective and attention to detail. After all, the portraiture artist captures what he is seeing in his own style, with the end result featuring the essence of the model. What this means is that a good portraiture artwork reveals something special about its subject, something that can only be gleaned upon careful inspection and appreciation.

How can you showcase your portraiture art?

With more artists incorporating portraiture art into their practice, there's bound to be something for every collector. When deciding how you can display your portraiture art, consider that a portraiture artwork commands attention due to the intensity of the human face, and is likely to work best as a focal point in a room, especially if it is the only one of its kind.

Otherwise, a salon-style hang made of various portraiture artworks may be effective in dramatizing a feature space such as a master bedroom or the living room. In fact, this could be a captivating setup for those who wish to commission a portrait of themselves or a loved one. If in doubt, speak to our expert curators at The Artling to help you select your artist!

The versatility of portraiture art, being a key reason for its popularity, has shown that it allows for the subject matter to be anything, so long as it is a person. This means an artist can display their talent in any chosen genre, as long as it contains a human subject. Here are some portraiture artists at The Artling, who will inspire you when deciding what type of portraiture art you might be interested in collecting! 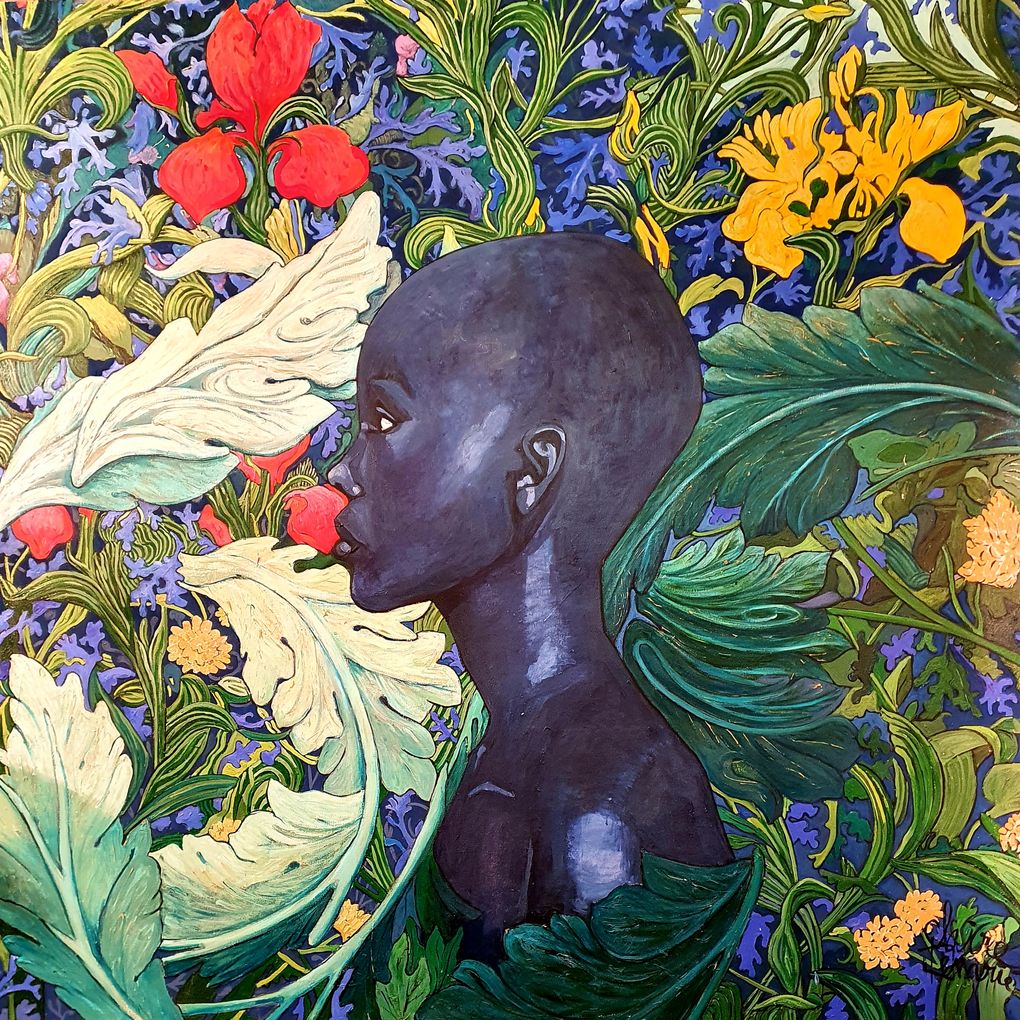 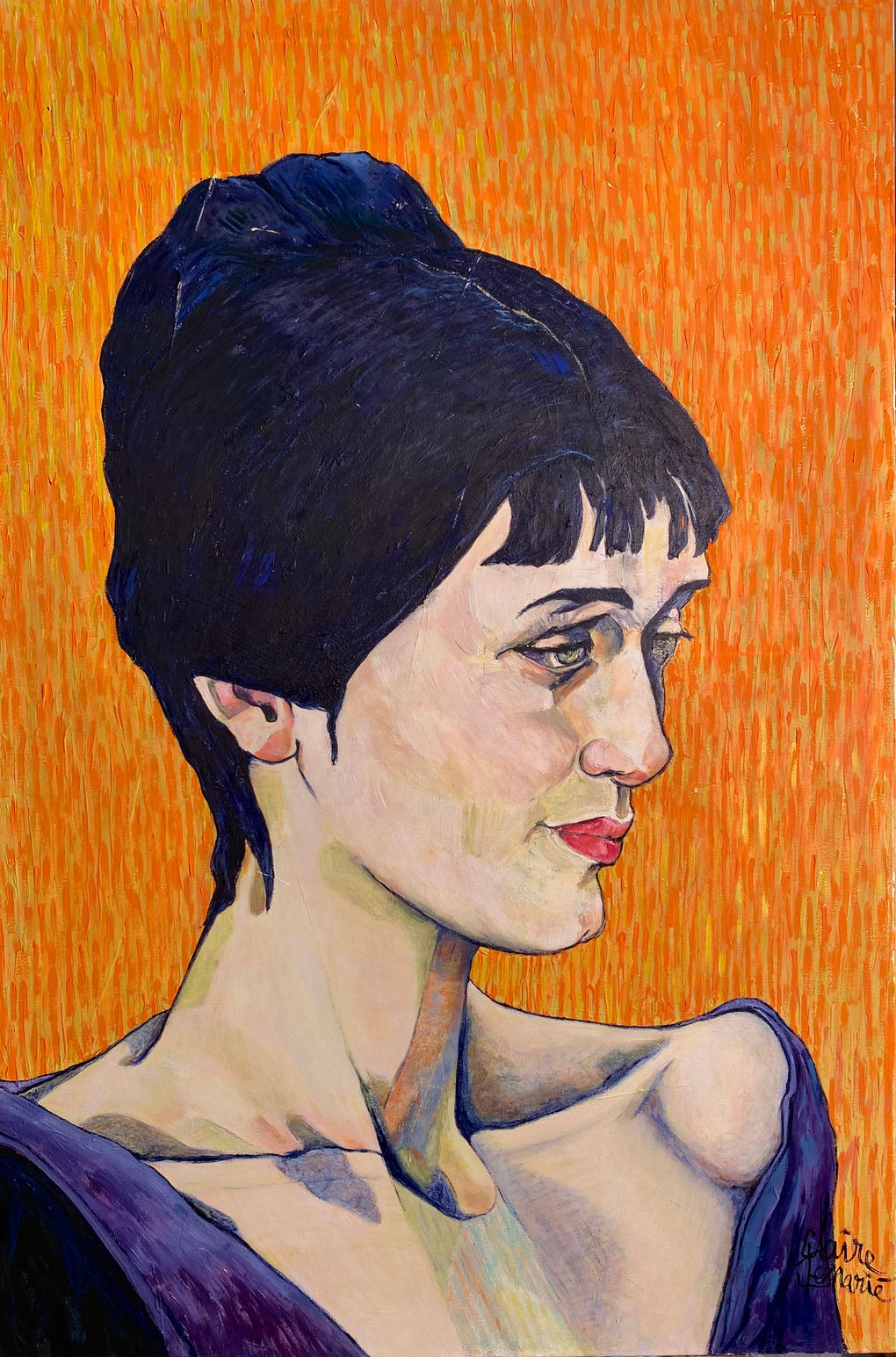 Claire Denarie-Soffietti's portraiture artworks, painted in an undeniable Fauvist style, certainly draw strong resemblances to the works of Henri Matisse, combining lifelike detail with bright and bold colour choices that bring her subjects to life. Denarie-Soffietti's painterly interest lies between the cultures of her hometown of Paris and her moves to and from the South, as seen in the subjects of her artworks, depicting men and women in French orchards and the sights and sounds of the Carribean. This creates a classic yet modern look, and Denarie-Soffietti's ability to adapt her style at will makes her a highly sought-after portraiture artist.

Pamushana (A Place under the Sun) 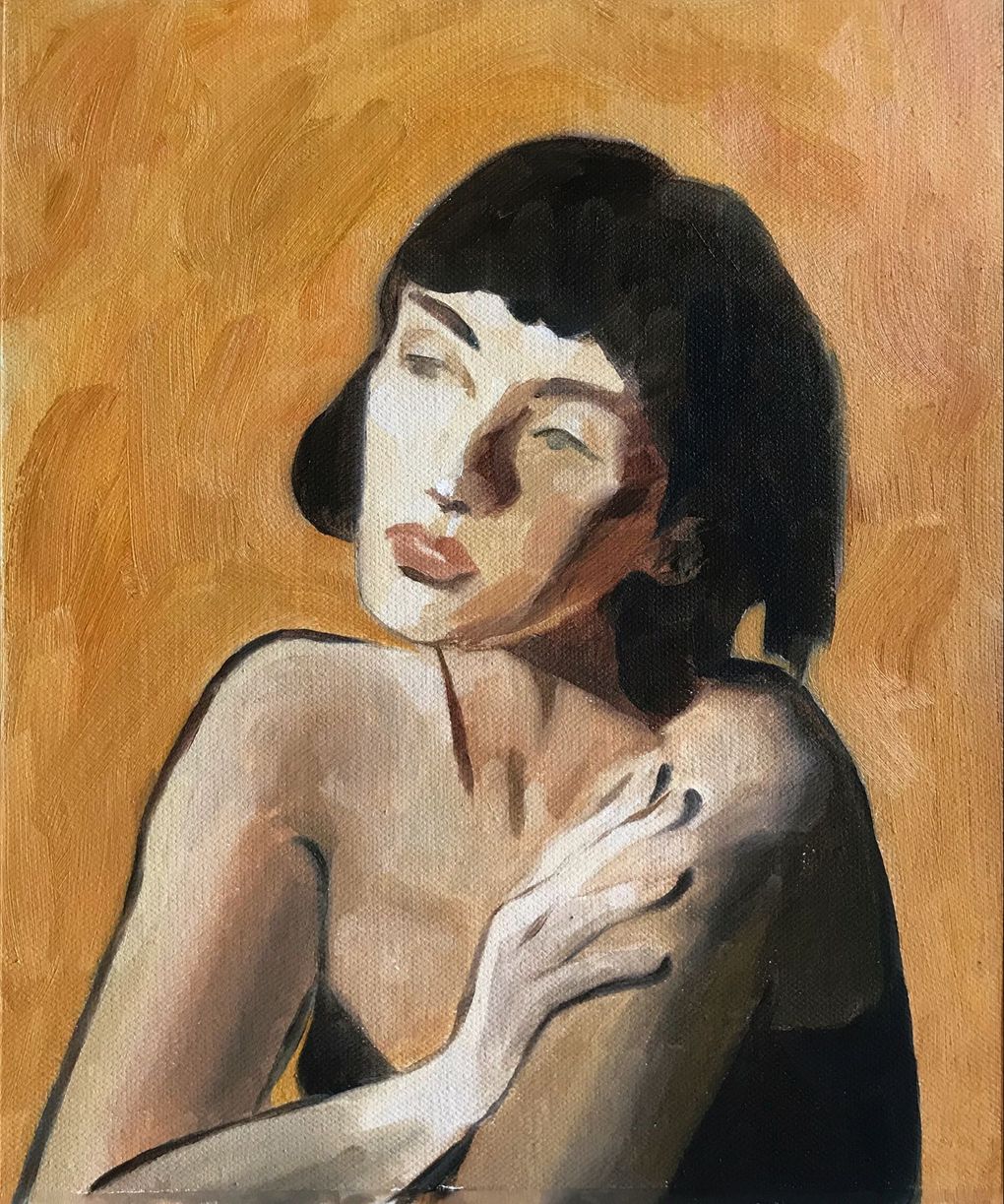 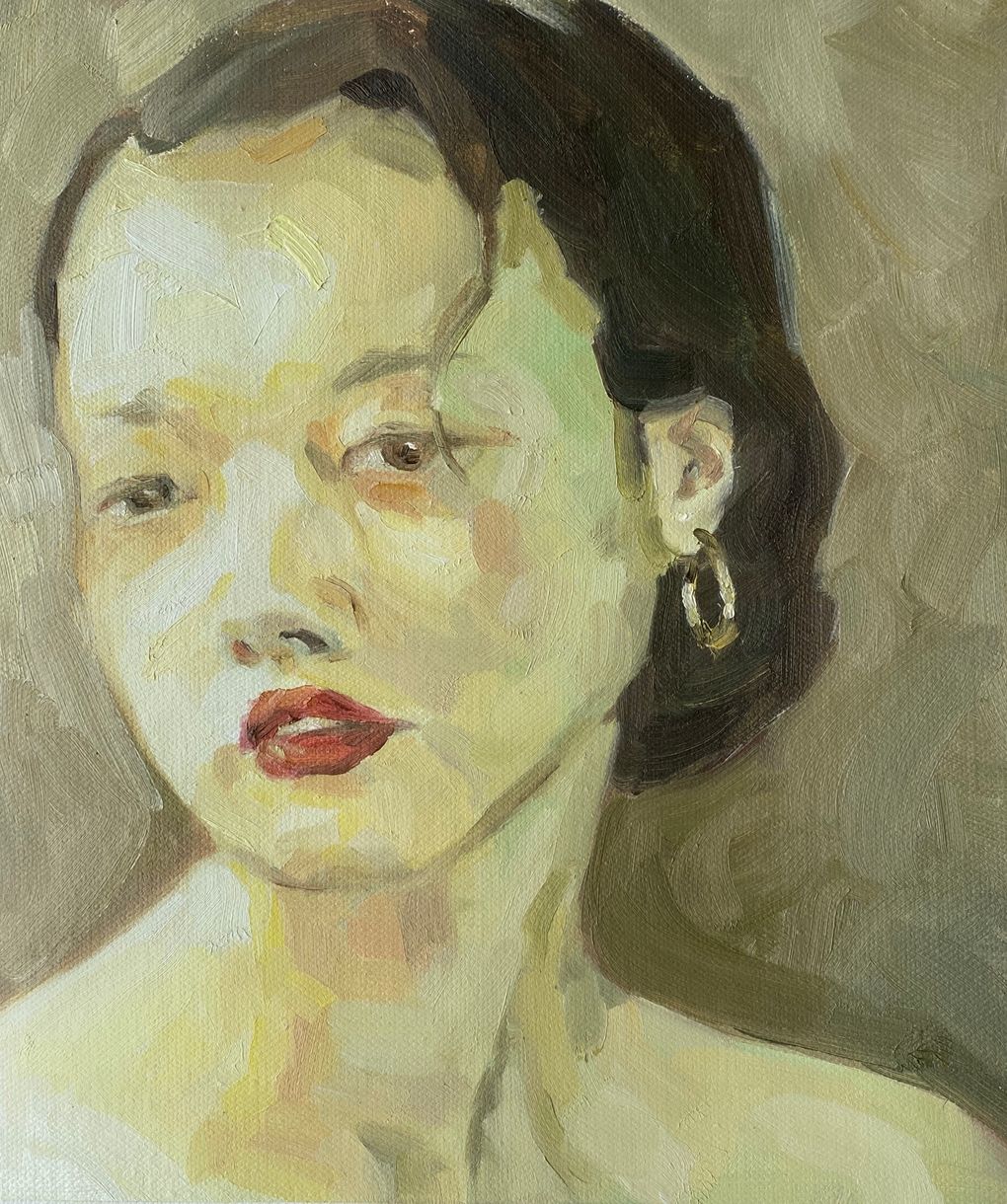 Yi Zhou. Zoe’s portraiture artworks aim to capture a mood or atmosphere in a pure light, much like the works of John Singer Sargent and Pierre-Auguste Renoir with their resplendent landscapes and portraits of pensive people. Her warm colour palettes draw attention for their realistic yet sombre interpretations of the everyday. Yi Zhou. Zoe typically works in oil painting due to its expressive qualities that allow her to explore the intricacies of her subject as an individual. Consider her expertly-devised scenes of daytime if you are seeking a portrait to be done up of yourself, in her unique impressionistic style. 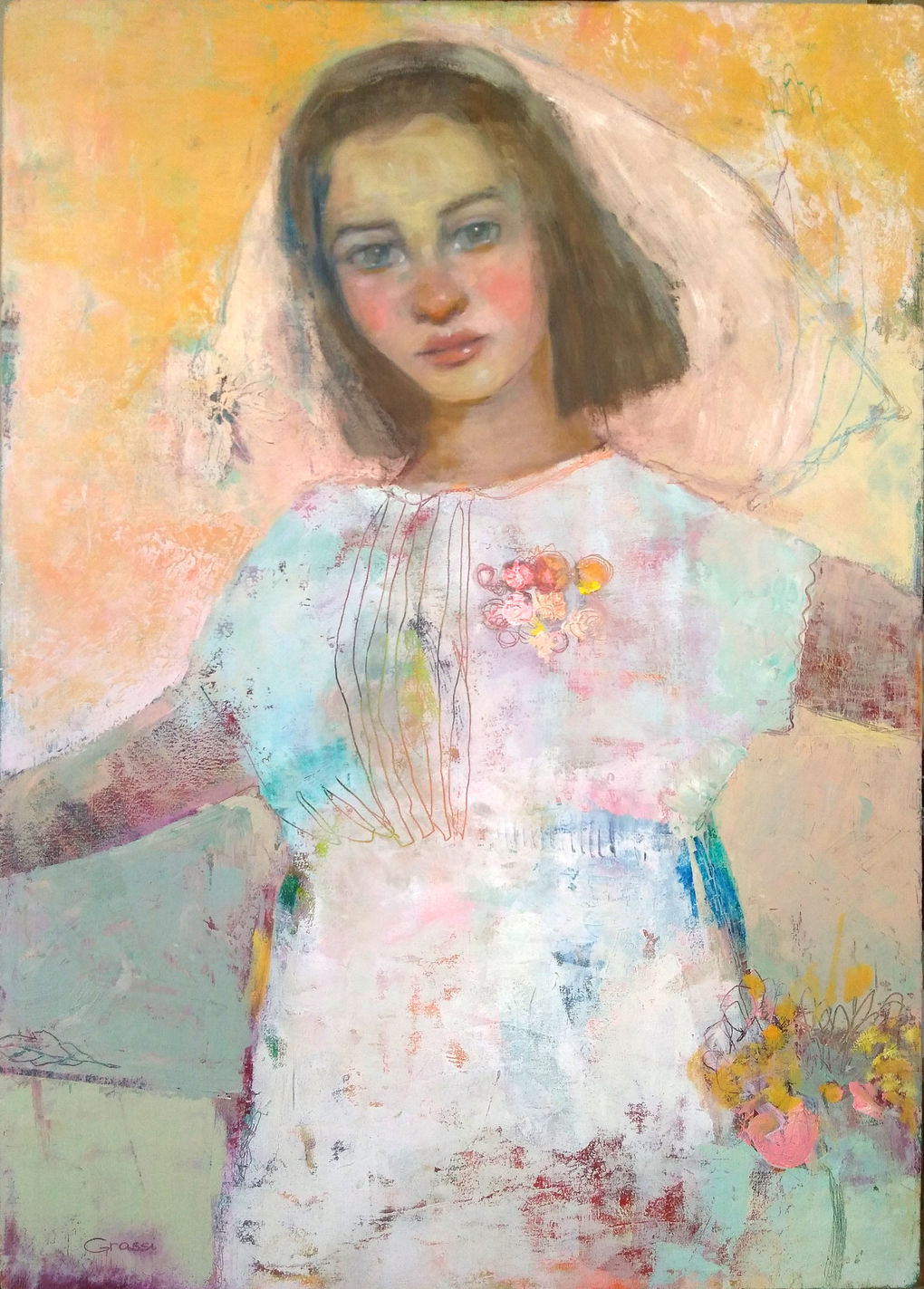 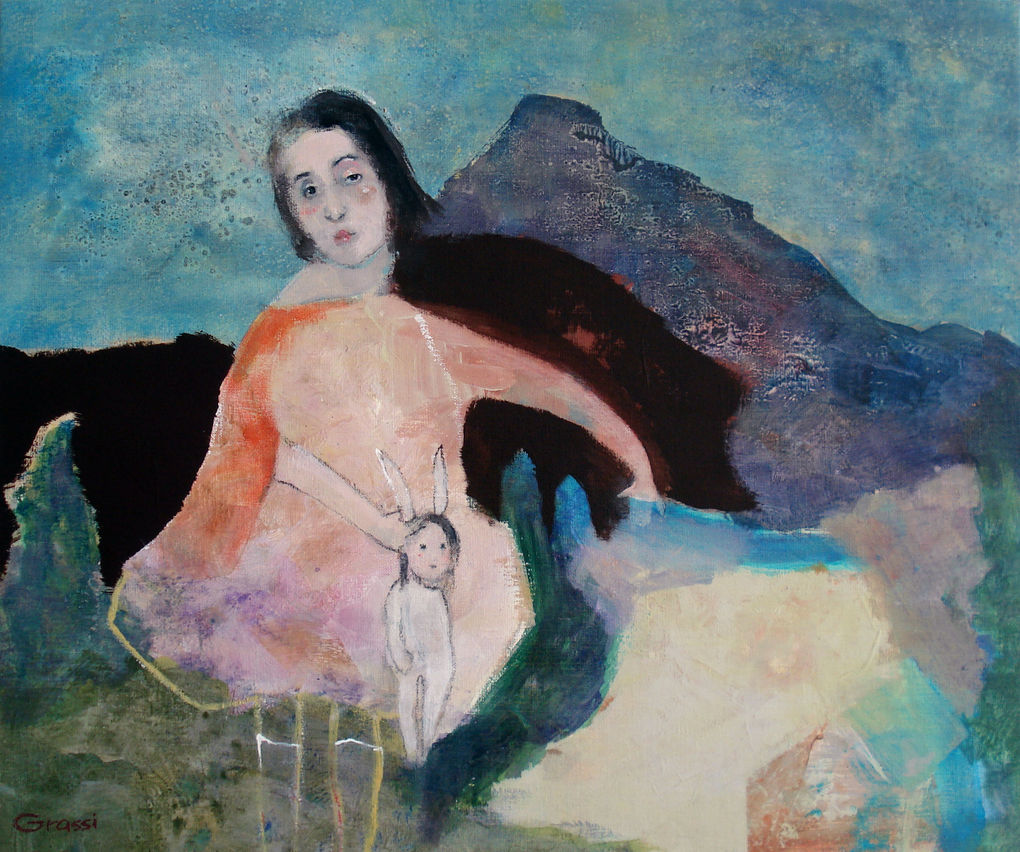 Marta Grassi's magical portraiture artworks of women and children reveal a childlike wonder in her perspective of the world. Blending her interests in abstraction and figuration, Grassi, born in Uruguay and based in Paris, also experiments with colour and texture to give her artworks a sparkling quality. These portraiture artworks ultimately hark back to the likes of Symbolist painter Gustav Klimt, whose roots in Art Nouveau painting also show in Grassi's vision with her quaint, ornamental style. For those looking for a special take when commissioning portraiture art, you may just find yourself immortalized as an otherworldly being with Grassi's artistic hand. 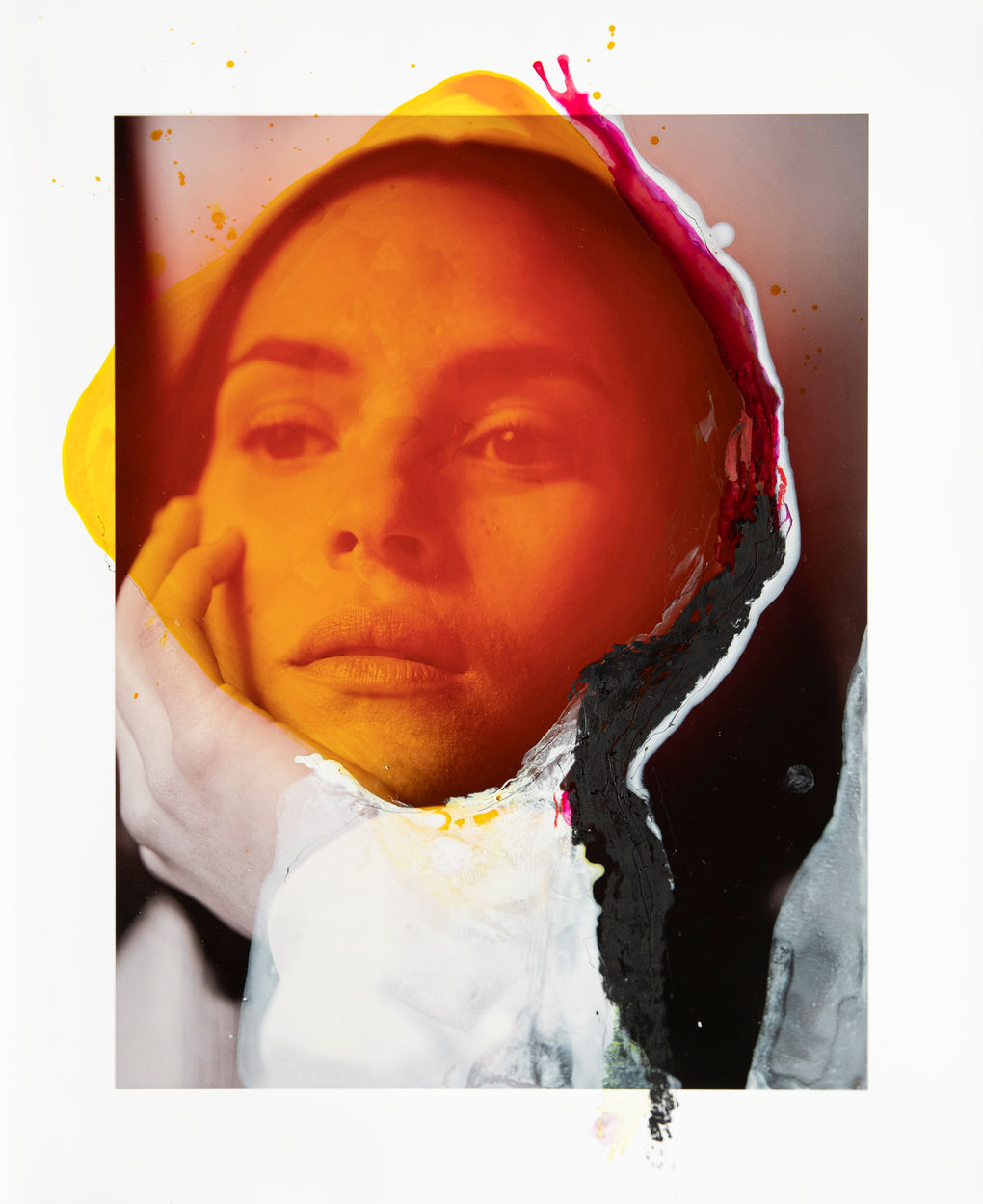 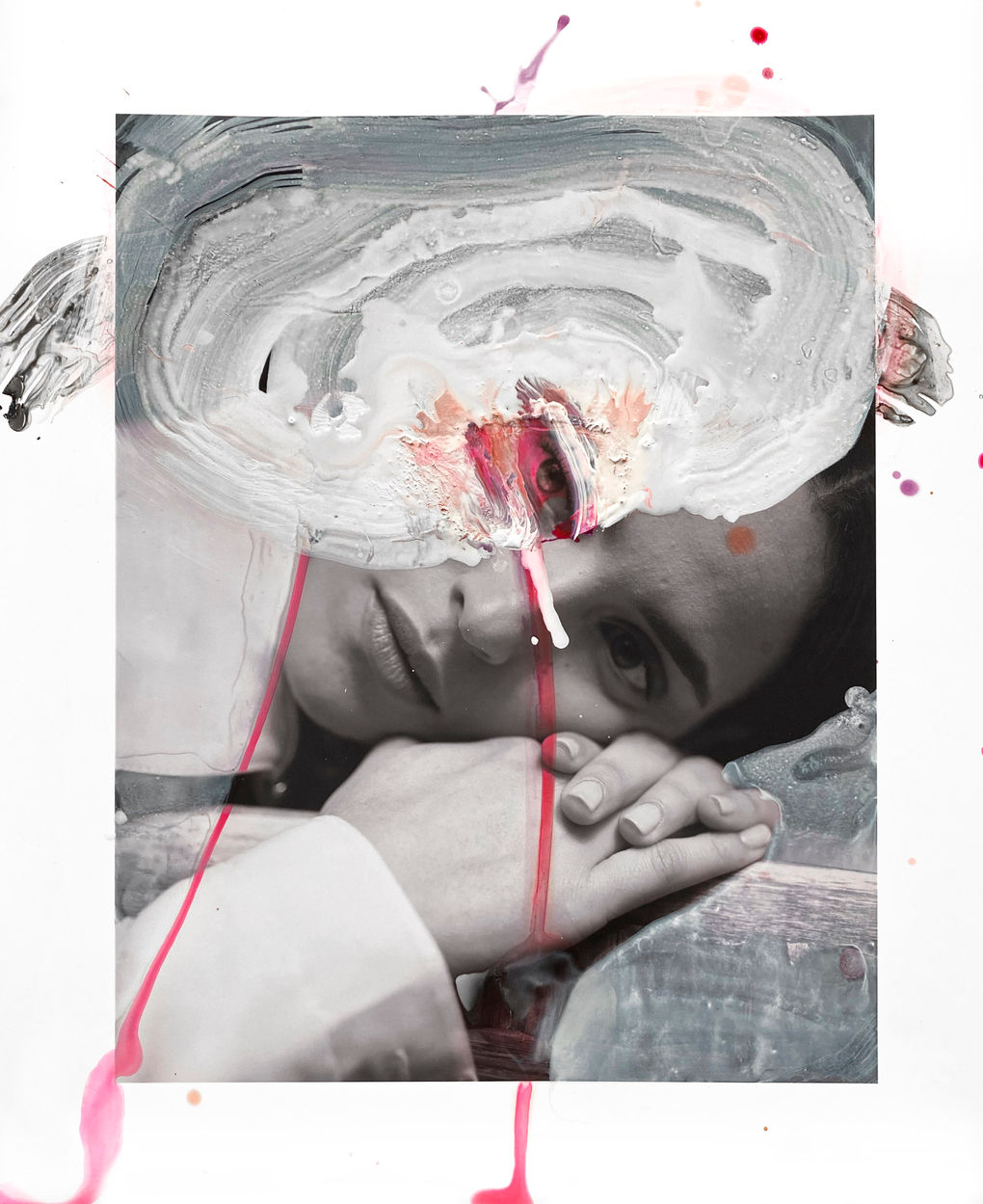 If you are drawn to the compelling photographic artworks of Hunter & Gatti, you'll see that portraiture art does not always have to be made strictly using a single medium. The duo's mixed-media artworks prove that often, it is the most unconventional of ideas that pay off visually. For Cristian Borillo and Martin Cespedes, it is their expertise on art, film and photography that lends them versatility when it comes to the exploration of their ideas. Using acrylic paint and oil wax on fine art paper to modify the picture-perfect appearance of their subjects, Hunter & Gatti's portraiture artworks blur the line between high art and popular culture, to show that one is not complete without the other. 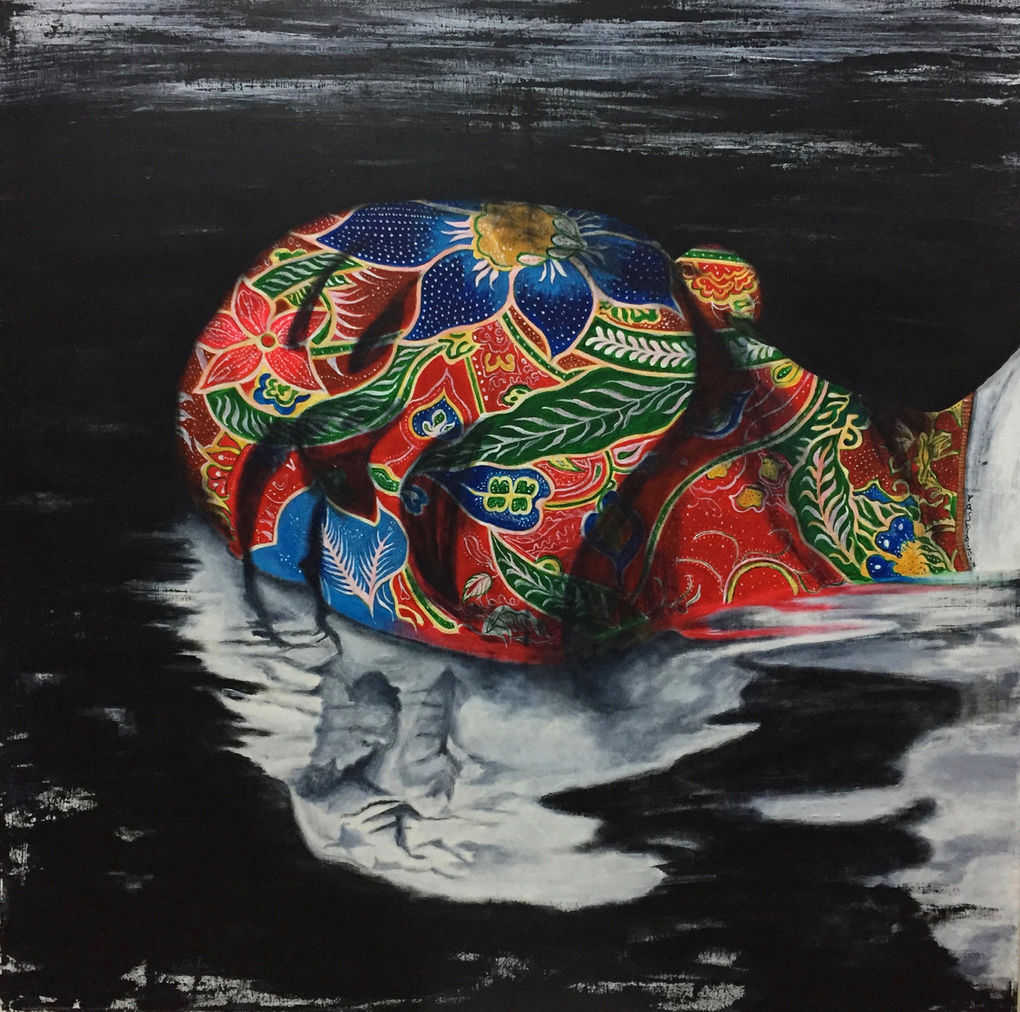 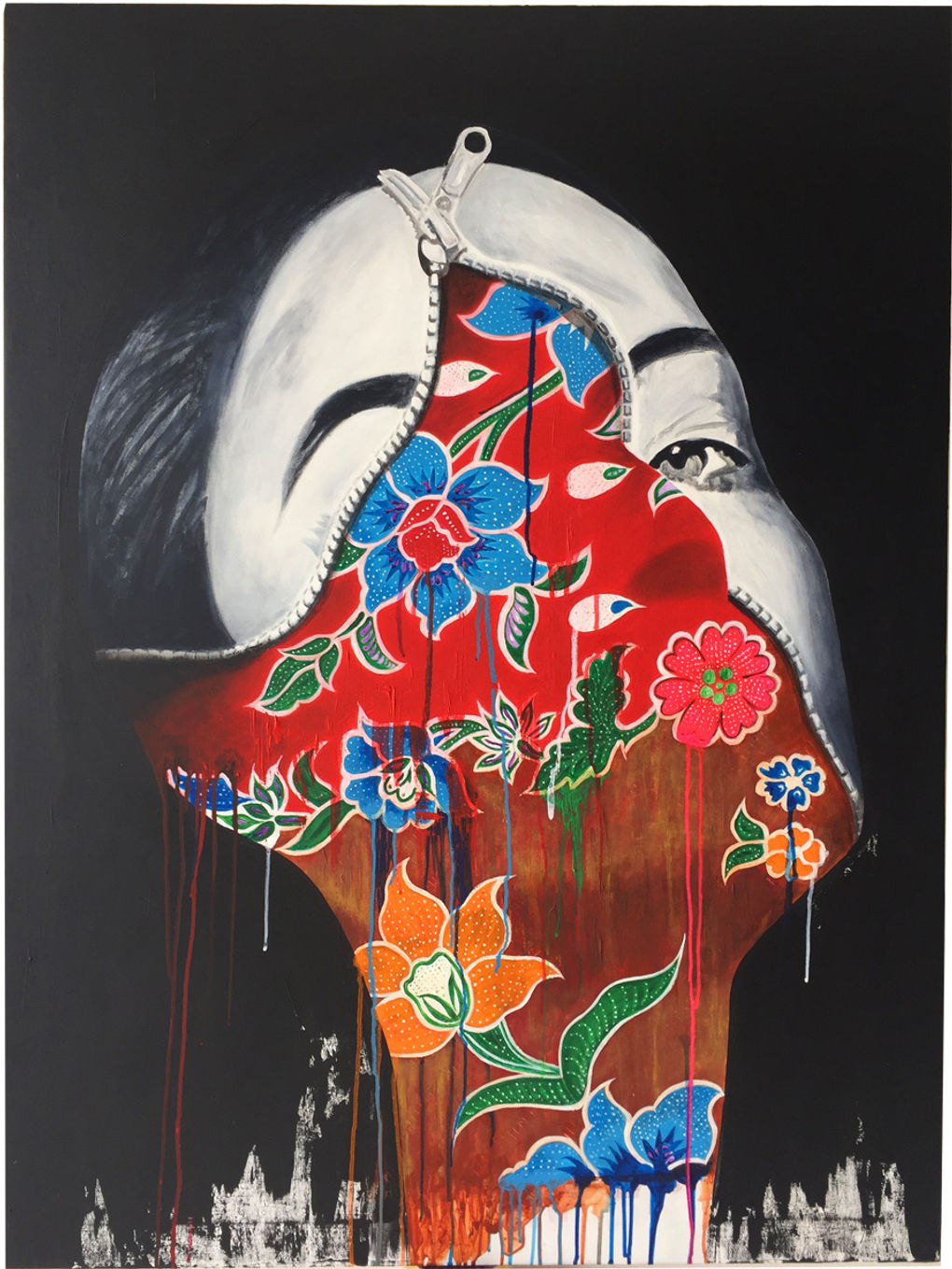 Rashid Salleh's portraiture artworks may gesture towards the figurative, but ultimately, these surrealist-inspired paintings aim to celebrate the beauty of the female form. Based in Singapore, Salleh renders his own visual and conceptual interpretations of the human body, which he has gleaned from observations of everyday life and culture to create a mix of the strange and the beguiling. Salleh's choice of bold primary colours against a backdrop of monochromatic flair showcases a love of juxtaposition, in essense, anything that seeks to challenge what is ordinarily known. Those seeking a portraiture artwork that is one-of-a-kind will thus be interested in Salleh's striking artistic perception.

The influence of portraiture on art history is evident, in contemporary times, as artists continue to explore their style and identity, creating portraits both of themselves and of others using their medium of choice. Outside of fine art, people gravitate to having portraits of themselves taken during important moments in their lives to be able to return to them later, highlighting the power of the portrait. Art collectors and investors alike will thus find much to love in the portraiture art genre, and by collecting portraiture art, you may find yourself in the eyes of these subjects that were once unfamiliar!

The Only Figurative Art Guide You Will Ever Need