The Queen's Gambit: An Elegant Collection of Chess-Inspired Art & Design

The Queen's Gambit: An Elegant Collection of Chess-Inspired Art & Design

The artful game of chess is one of the oldest games in human civilisation with roots thought to be traced back to its earliest version, Chaturanga, in India in the early 6th century. With the rise of empires and conquering of lands, it did not take long for this game of strategy to spread across the world. The game made its way across the Middle East, Europe, and Asia, taking form in different cultural variants such as Shatranj in Persia and Xiangqi in China. With its widespread popularity, the game inevitably permeated the art world as well. Chess iconography appeared in paintings and sculptures, and some artists began to create physical chess sets with their own artistic twists. Many of these artists sought to highlight the beauty and intricacy of the game, and others utilised its imagery as symbolic representations of the human condition.

Today, chess remains one of the most popular games of our history; and the newly released Netflix miniseries, The Queen's Gambit, has only served to heighten its acclaim with its fresh take on the classic game. If you've watched the coming-of-age show and are looking for your chess fix, look no further! Here on The Artling, we have put together a collection of chess-inspired artworks and design pieces that will definitely unleash your inner gambit!

'Fortify' by Daniel Skoták is a chess set that is based on the modern industrialised era and inspired by the construction of old industrial iron-concrete buildings. The Prague-based designer chose the shape of frustum due to the ergonomic characteristics it has. The upper parts of the figures are stylised into simple forms so the legibility of the figures is maintained.

'Deep Blue v Kasparov' is part of Jeremy Sharma's Endgame sereis that depicts the last moves of famous chess matches in history. The chess-inspired print represents the re-enactment of a famous endgame in 1997 of the Russian chess champion, Garry Kasparov, depicted in black and an IBM supercomputer called Deep Blue. This game was the last of six games and the first time a human lost to a computer in a tournament. Jeremy deliberately featured a specific number of chess pieces to represent the speed in which the game ended. For the Singaporean artist, this can also be seen as an abstract diagram of grids and objects, or a scene derived from a series of logical moves.

Chess Sets by The Machinist 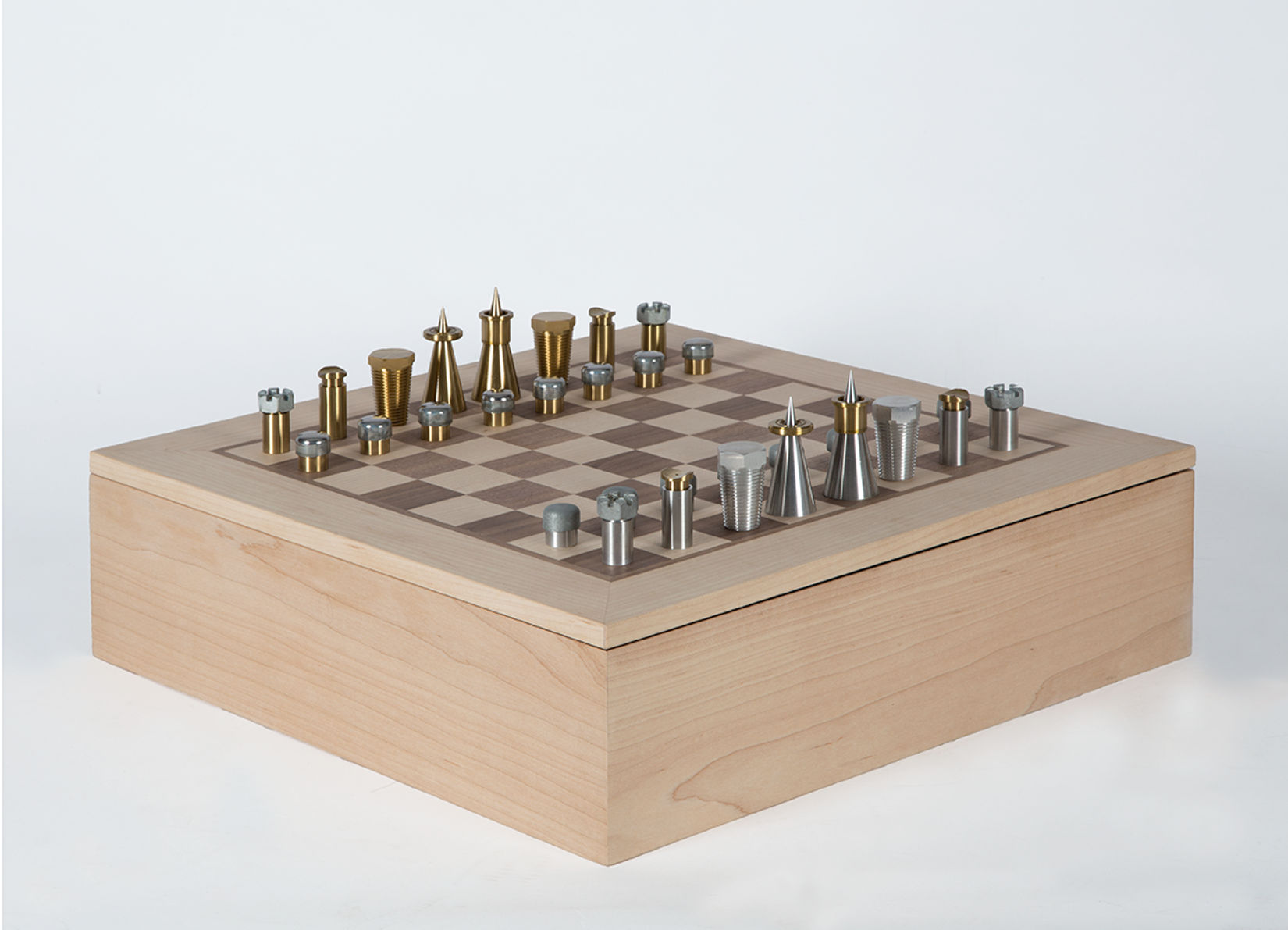 International Chess Set - The Machinist (Available on The Artling) 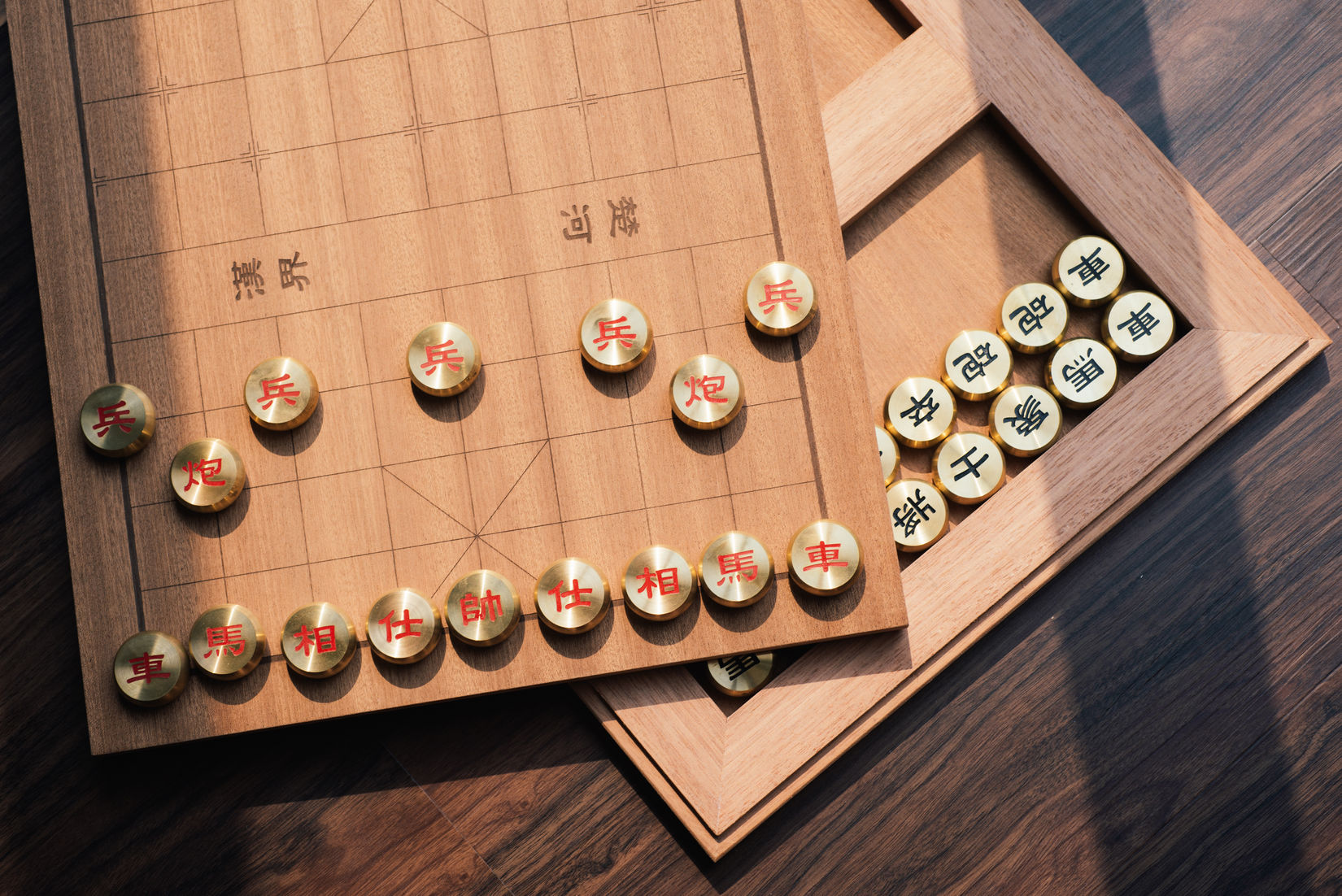 Chinese Chess Set - The Machinist (Available on The Artling)

The 'International Chess Set' and 'Chinese Chess Set' were crafted and handmade from locally sourced auto-parts by The Machinist. This design team is made up of Wendy Chua, Xin Xiaochang, and Yuki Mitsuyasu. They transform an industrial trade into artisanal practice and believe that the spirit of craftsmanship is the essential wisdom to attenuate the balance between man and machine.

'Chess Composition #9' is a chess-inspired photograph by Bach Quang Nguyen. Bach has chosen the medium of photography, particularly still life photography, to explore cultures and languages from all over the world through objects. His primary focus is the connection between photography, time, human nature, and philosophical concepts.