"See Like a Heretic: On Vision and Belief" a solo exhibition by Suzann Victor at Gajah Gallery

There’s a line in Jay Z’s "Heaven" that goes: “Question religion / question it all/ Question existence / until the questions are solved”. It seems rap royalty captured the proposition of Suzann Victor’s "See Like a Heretic: On Vision and Belief" in fairly straightforward terms. The exhibition at Gajah Gallery encourages active seeing a la John Berger, and like the song, Victor’s ethereal visuals admonishes the viewer to question — religion the soul of it all.

The exhibition is the culmination of Victor’s two-year collaborative effort with Gajah Gallery’s Yogya Art Lab (YAL) in Yogyakarta, Indonesia. On most days an experimental foundry for the gallery’s contemporary artists, Victor’s project is a marked departure from the bronze and aluminium sculptures typically birthed from it. "See Like a Heretic" presents the tangible icons of the Catholic faith, the very objects meant to encourage reverence, as starting points for a deluge of heretic thought triggered by Victor’s intervention. 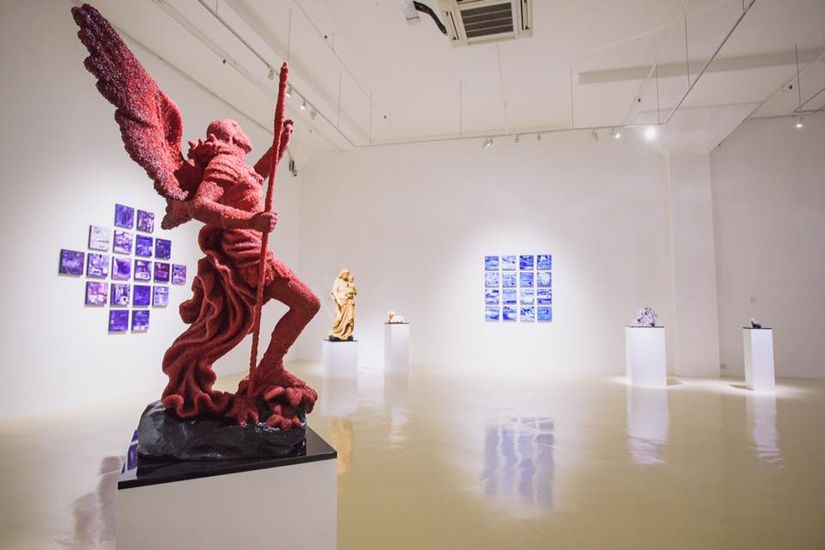 Stepping into the exhibition space is a reminder that meditation seems an inevitable consequence of the quietness only a gallery can provide. Although missing architectural familiarity, stillness created by the dimly lit space sizes up to that of a cathedral; but the expected comfort of a space so seemingly serene never comes. Like a Gothic cathedral whose structure exists only for the windows, the space is punctuated by shimmering idols each encrusted in crushed stained glass and a dominating dome diffracting light, like a glowing half-sphere. 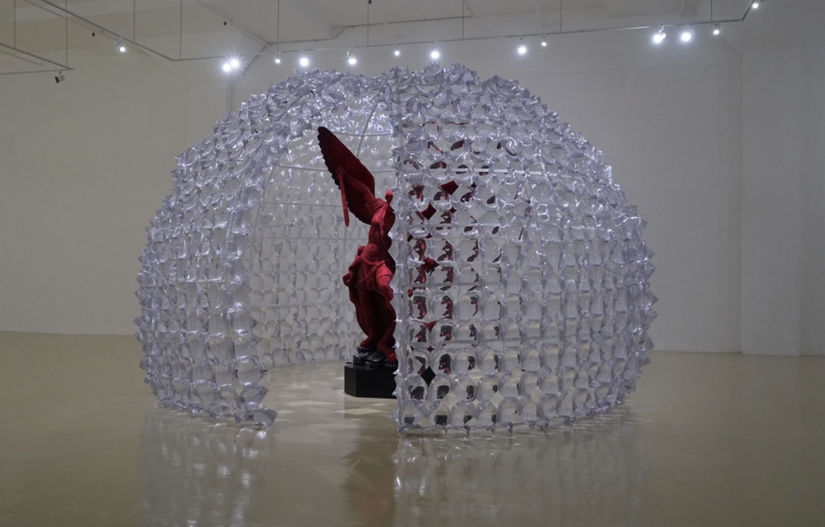 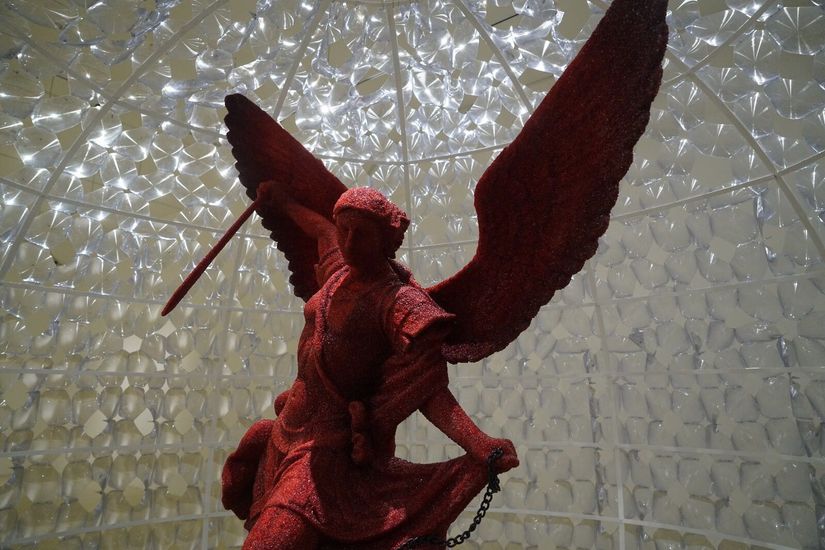 The most prominent work on display, this feat of ‘soft’ architecture and the sculpture it encloses is the exhibition's namesake. The structure of See Like a Heretic is made of fresnel lenses now familiar in Victor’s oeuvre. A closer view of the construction allows for a partial view within, while a few steps back reveals distorted views of both inside and out. Looking is obscured but strokes of blood-red from the focal point of this installation are visible from outside, and upon entering, the viewer is confronted with the Archangel Michael and his attributes: his wings, the sword, in the climactic breath before the act he is so known for. The Archangel is thought of as the angel of protection, the most powerful of all angels, and his position at the heart of the exhibition alludes to his place in this saintly hierarchy.

Yet drenched in blood-red, the sculpture underscores killing, not protecting, led by the one closest to God. In the face of convention, ‘truth’ is subverted to make way for alternative vision, even many ways of seeing as demonstrated by the multi-faceted dome. Although the exhibition leans strongly toward Catholic iconography, it must be said that the Archangel is an important feature in various strands of Christianity and other religions. It may seem here heresy is sowed to contend the ‘truth’ of common, daresay universal, knowledge. 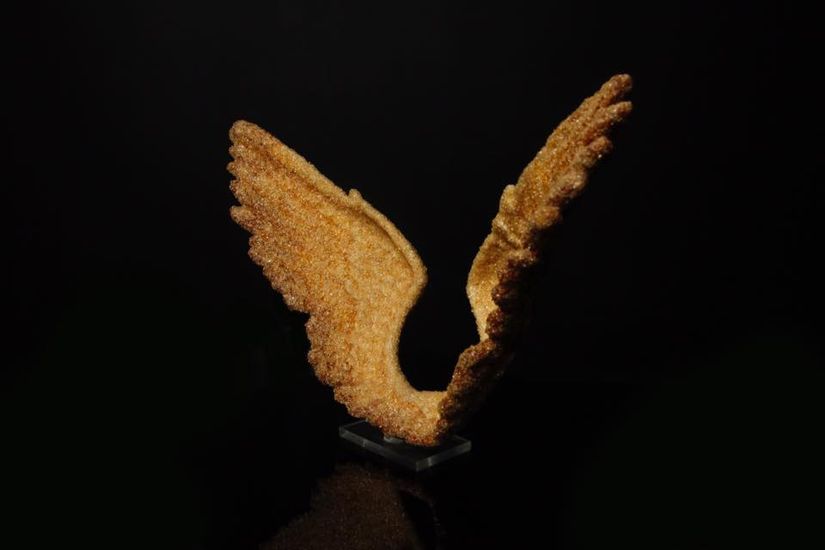 Four pairs of outspread wings line the sides of the gallery entrance, proud as those of the Archangel himself. Crushed stained glass is used to great effect here as these beautiful wings look delicate and ready for flight despite their petrification. However, there is a conspicuous absence: no living body to take flight. Too neat to have been forcibly ripped away, the conjoined wings form an incomplete circle, ostensively highlighting the void where a figure should be. ‘They’ are loudly present in their absence, and wearing the goggles of heretical vision set out in the exhibition, perhaps ‘they’ were never there at all.

The meditative repetition of crushed glass on figures of religious significance throughout breeds a creeping sense of unease. In the totality of a sculpture dripping irregular fragments of glass, the aggression associated with the act of crushing is inescapable. In the entirety of the gallery, bursts of colour and light bring to mind disparate acts of violence that brought about these fragments. Perhaps discomfort begins in discord, as a figure the epitome of peace like the Virgin becomes the literal canvas for the product of destructive forces. The destruction is in fact multi-fold: the primary purpose of stained glass windows in Catholic churches of yore was to educate the illiterate masses on biblical narratives, from which Christian morals were inculcated. While the stained glass sheets used in service of these works were not panes from church windows, symbolism of the act remains: the erasure of orthodox narratives and its associated norms. 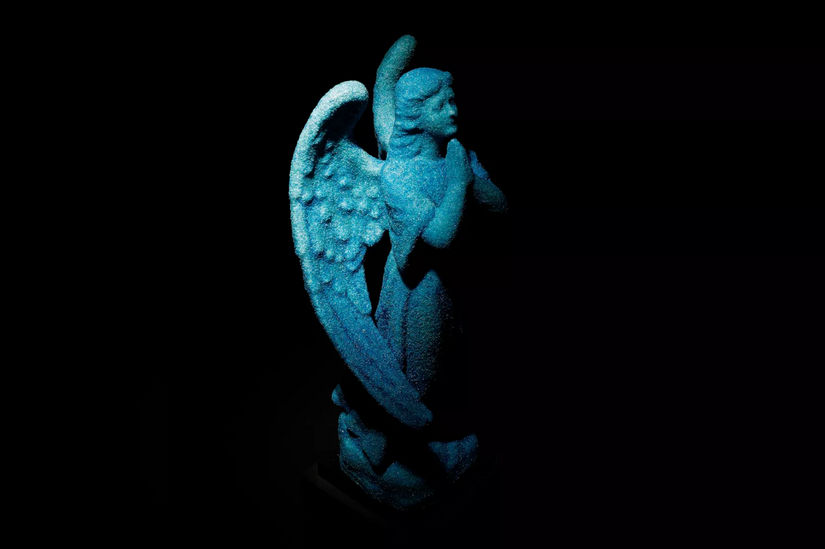 In the totality of a sculpture dripping irregular fragments of glass, the aggression associated with the act of crushing is inescapable. In the entirety of the gallery, bursts of colour and light bring to mind disparate acts of violence that brought about these fragments.

More than that, the figures below are in fact ready-made sculptures, located by YAL and selected for this exhibition by Victor. The recognisably mass-produced nature of these figures, ones possibly seen in parochial churches or even homes, points to the commercialisation of religion. But the figures were cleansed, stripped of their painted, human-like veneer through sandblasting — a baptism of sorts, albeit again one propelled by force, reintroducing the personal touch to impersonal objects. It is on these quasi-human (yet ironically super-human) forms that Victor encrusts in shards of what was once religious iconography. The disparate processes of erasure, destruction, and reformation coming together in these sculptures arguably constitutes active transgression that makes viewing, and with hope seeing, the sculptures heretical in itself.

The vulnerability of allowing alternative ways of seeing is quite literally at the heart of the exhibition. Hearts of different colours, of differing numbers but all in crushed stained glass are precariously perched on arteries in a web of its own making. They are gorgeous and grotesque all at once. What captures the imagination however is a singular heart of made of bronze, polished to a gold sheen aptly titled Gold Heart. 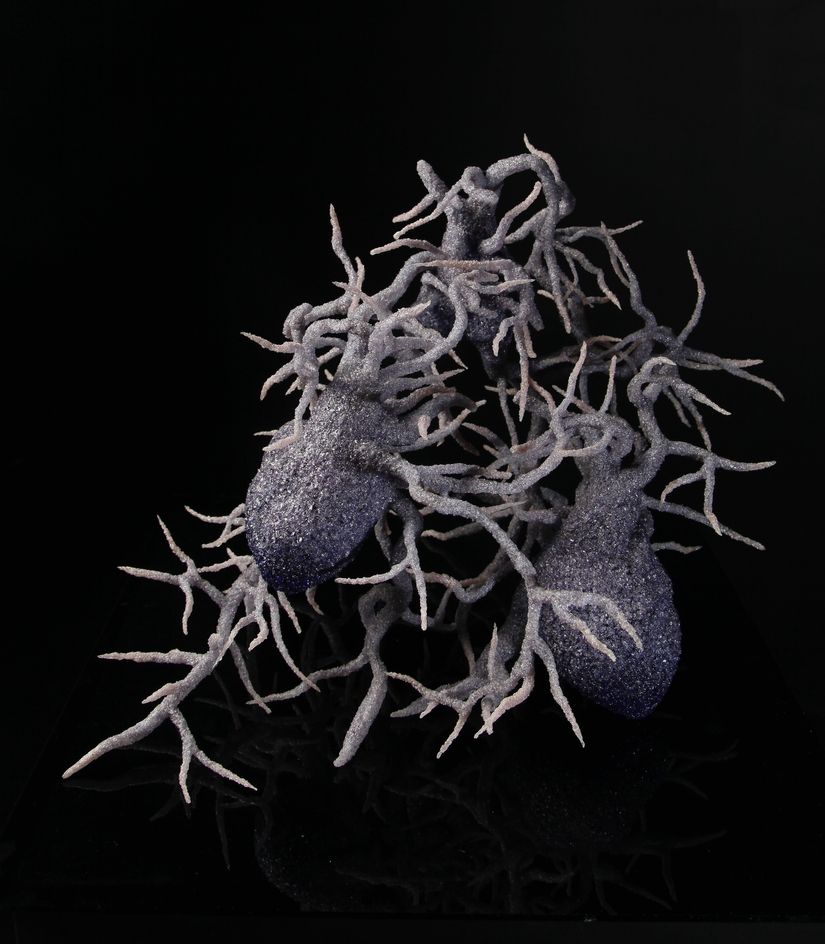 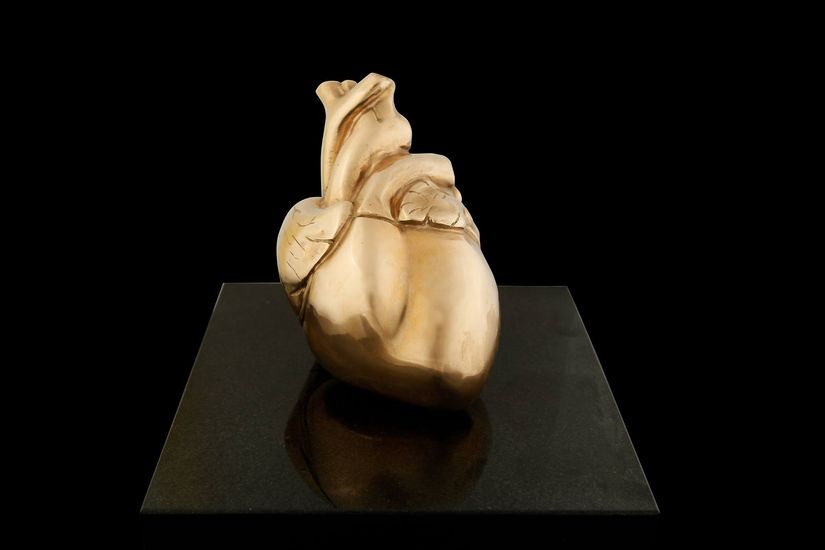 It is displayed beside the floating, haunting Cross (header image), the crucified Christ sans titular cross, hanging as if in thin air. Gold Heart and The Cross are placed beside each other in a suggestively apse-like section of the gallery all to itself directly establishing relation. Like Archangel Michael, Christ is also in red. The crucified Christ represents the sacrifice of God for humanity, yet without the man-made cross burdening him, his crucifixion is seen independent of human culpability. And beside the unmistakably inhuman hardened heart, so different from those of crushed glass that still retain an element of humanity, sacrifice of God’s one and only son seems not to have touched mankind at all.

I find myself hesitating at the suggestion that modern man has lost his religion. Of course the phrase itself has been channelled into pop songs (or rap songs, like ‘Heaven’); the notion is not a stretch. Growing up in a Christian household then independently renouncing the religion, I have been through the experience on my own. Yet the road guided by Victor still somehow manages to catch me by surprise — "See Like a Heretic: On Vision and Belief" brought up questions that may not ever be solved, but are worth asking nonetheless.

Yayoi Kusama: Life is the Heart of a Rainbow On At Museum MACAN...