Poolside party by Yoshi47
Living in the nature 02 by Yoshi47

Born in Gifu prefecture and raised in Aichi, Yoshi47 moved to California to pursue a career in art. There, he immersed himself in the Bay area by doing live painting, participating in solo and group exhibitions, as well as many other art events. Yoshi47 not only immersed himself in the art community but also in the cycling community, and even became a bike messenger.

While art and cycling seem like two completely different fields, it was through his experience as a courier that Yoshi47 found the conceptual basis for his art. Being as involved with cycling as he was meant that he was exposed to all sorts of art on the streets of California. In 2016, he painted one of his ‘Monster Mural’ works on a wall in Portland, Oregon, shooting him to fame as a muralist. Yoshi47 was hooked, and became more motivated than ever to don as many walls as he could with his distinct characters.

Now, Yoshi47 has moved back to Japan where he is a full-time artist who lives by the ocean. As part of ‘On The Rise', a new segment showcasing emerging creatives on The Artling Artzine, we get to know Yoshi47 and his practice a little more, why he has invented these quirky subjects, their personalities, and what he hopes to achieve in the world:

For those who aren’t familiar with your background, could you tell us a little more about your journey as an artist?

I started pursuing a career as a professional artist when I lived in San Francisco, CA. On the other hand, I was a bike messenger who wanted to get involved with more street art. I also wanted to be recognized as a fixed-gear rider. Since I moved back to Japan in 2006, I’ve been exposing myself more to international circuits. I showed my works and painted murals in the United States, Canada, Mexico, Australia, China, Taiwan, and Sweden. Recently, I'm into painting murals. To me, making murals is an outdoor sport.

Why have you chosen painting as your mode of practice?

I don't consider myself just a painter. I do create 3-dimensional works, mostly wood carvings. However, painting is my basic expression of all matters. I love painting, the smell, the colors. I find it interesting to express my imagination into a 2-dimensional world. 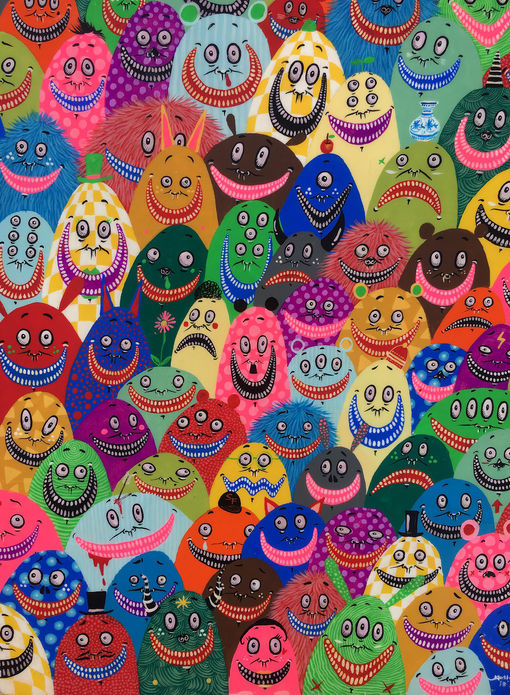 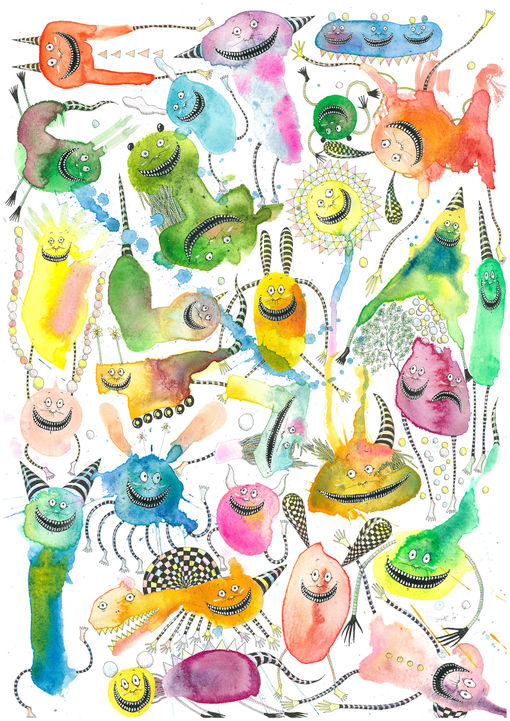 Living in the nature 02

"I simply want my audience to enjoy the adventures of pop and fantasy when they see them."

What are some themes you find yourself drawn to when creating your works?

These days, I find myself making murals. Murals allow me to put my signature big smiling faces and different types of colorful characters on huge walls around the world. Once you see those characters in your city and on your travels there’s a feeling of, "I met you again!”. It's like an adventure where you see weird monsters and creatures wherever you go, like in Jim Henson’s 'Neverending Story'. I simply want my audience to enjoy the adventures of pop and fantasy when they see them. I'm still on my way, and you don't see them everywhere yet, but I would love to increase the number of these characters on walls all over the world.

How do you find inspiration for your work?

In my own adventures. through traveling, surfing, snowboarding, meeting new people and just simply enjoying life.

What's your favourite museum to visit for inspiration?

Forest for the Tress, Portland, Oregon. Featured in Lonely Planet.

Is there a work or series that you find yourself more attached to? What is it and why?

I made a series of ‘BIG SMILE FACE’ monster works. It’s based on the simple concept that when someone walks around the city and turns on a corner, they would encounter a huge smiling monster on a building in front of them. What would they feel? I first did this big-faced monster mural in Portland in 2016. After that, I received emails and messages from local commuters saying how much they enjoy seeing it daily. A message said, “Whatever happens in my day, that huge smiling monster makes my day a happy one”. Lonely Planet interviewed me and published this mural as one of the 150 influential mural works in the world. This even made more people want to visit the area just to see this work. So far, my smiling characters are on walls in Japan, the United States, Taiwan, China, and Mexico. I want to keep making more.

What has been the most challenging experience with making these murals?

It was a deadly hot summer, and I had to finish painting a four-story wall in a warehouse. I had to do this in 5 days without any assistants. I thought I might pass out from dehydration and heat stroke, but luckily I survived.

What’s next for you as an artist? Do you have any upcoming shows or projects?

I have a group exhibition called ‘WETPAINT’ curated by Persue and Wane COD from New York in Shanghai, in August. I also have a show with my wife in September, in Japan.

If Yoshi47’s characters bring a smile to your face, you can check out more of his works here, available on The Artling.

The Dragon of Amoy Alley